The Night Of The Hunter was actor Charles Laughton’s directorial debut – you may remember we last saw Laughton as Captain Bligh in Mutiny On The Bounty back in 1935. Unfortunately, it was also Laughton’s directorial swan song; he had a pretty unique vision for the the film, one that was a little bit more experimental than audiences in the 50s knew how to process.  But I thought it was spot-on, and was fascinated.  (Clearly.)

Set in the 1930s, this is a dark story of Harry Powell (Robert Mitchum), a self-professed preacher who’s actually more of a serial killer and con man.  His M.O. involves traveling from town to town finding widows to marry, and then when “God compels him to” he kills them, takes their money and moves on.  The police do catch up to him at the top of the film – but just for auto theft, a crime which carries a short sentence. His cell mate (Peter Graves) is in for murder; he killed two men during a bank robbery.  Before he is executed, however, he lets slip to Powell that he managed to get away with $10,000, hiding it somewhere on his property with only his two children as witnesses.  It’s for them, he insists to Powell.

Unsurprisingly, Powell has a different opinion on the matter, and upon his release makes a beeline for his cellmate’s widow Willa (Shelley Winters).  Willa has taken to working in the local soda fountain to make ends meet, leaving her two kids John (Billy Chapin) and Pearl (Sally Jane Bruce) to look after themselves.  When Powell comes along, weaving flattering tales about “what your husband told me about you all,” Willa and Pearl are soon swept off their feet.  John’s more suspicious – especially when Powell implies that he knows that John knows where the money is, and intends to get John to tell him.  John holds Powell at arms’ length all through Powell’s courtship, engagement and marriage to Willa; but in due course, Powell receives his “Holy Order” to kill Willa, prompting John and Pearl to make their escape, fleeing down river in their father’s old boat with Powell pursuing them from shore.

Laughton made the film after falling in love with the novel which inspired it; he saw it as “a nightmarish Mother Goose story”.  That also perfectly describes the feel of the film – there’s a dreamy, fable-like quality to everything, with most scenes staged like they’re straight out of a fairy tale.  As the children flee down the river, Pearl starts singing – an original song that sounds like an ancient folk tale – as various forest animals watch them pass.  In another scene, as the kids try to get some sleep in a hayloft, John is warned of Powell’s approach when he hears Powell singing a hymn in the distance, and spots his far-off silhouette.  The scene is very obviously staged – and in truth, Chapin was looking at a little person on a pony instead of a distant Mitchum on horseback – but it fits the otherworldly tone of the film perfectly. 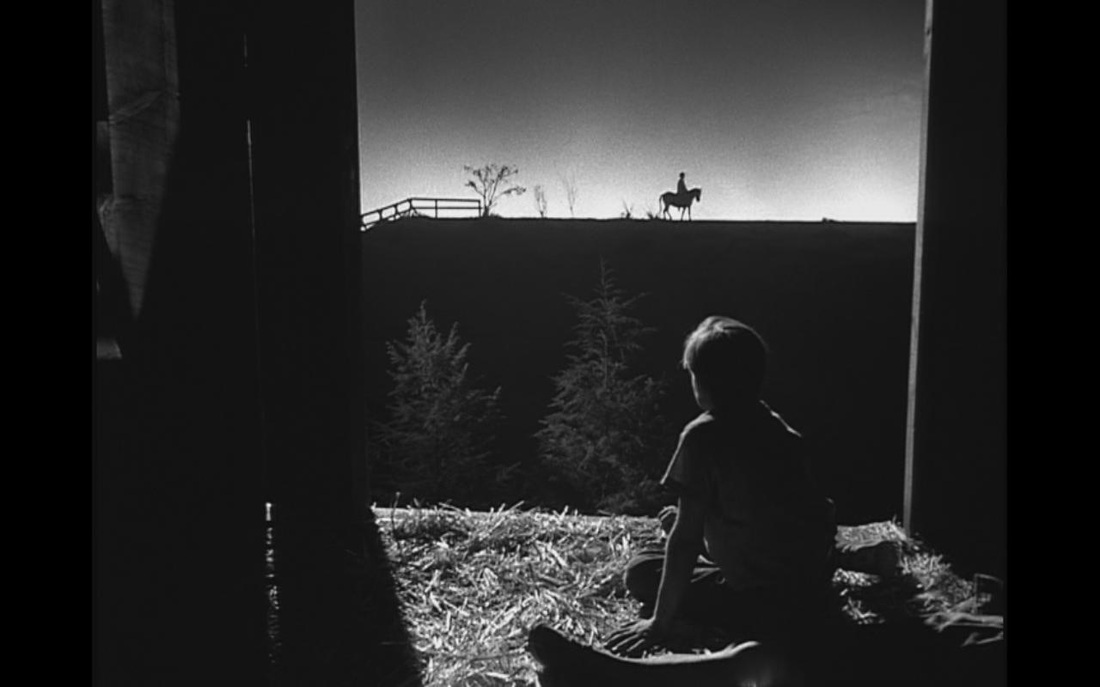 Speaking of which, this film just plain looks gorgeous.  Laughton leaned on a German expressionist aesthetic here, to play up the dreamlike feel; he and his art director also wanted the film to look at things the way children would, focusing in sharp on some mundane details but obscuring others.  So the sets are filled with meticulously crafted picket fences that surround nothing, bright neon signs that aren’t attached to any building, or how the river is filled with reeds and frogs and flies, but not any other boats.  The neverland feel is present even when the children aren’t; Willa and Powell’s wedding night is drenched in forboding shadow, and a shot which shows Willa’s ultimate watery fate is arrestingly beautiful – her hair waving in the water, echoed by grasses and reeds waving around her.

Even Lillian Gish’s character seems out of a fairy tale.  She turns up late in the film as an elderly widow who’s made a habit of taking in orphans, and draws John and Pearl into her brood.  Her name is “Rachel Cooper” but could just as easily have been “Mother Hubbard”, appearing to them in a patchwork calico dress and a big floppy hat and bustling them into a little white clapboard house with a vegetable garden in front.  However, when Powell tracks his way to the house, the mistrustful Cooper fends him off with a shotgun, and then settles onto the porch to stand guard all night.  The film’s art director reportedly was inspired by the famous painting of Whistler’s mother for the look of these scenes – or, rather, Whistler’s mother if she were packing heat.

Gish was amazing in this – hell,  everyone was amazing. Mitchum was just creepy enough as the preacher – many reviews dismiss his character as a con man, but I’m inclined to believe that Powell believed he really was getting commands from God.  His persuasions to Pearl to tell him where her Daddy hid the money walk a knife edge between pleading and threatening.  He’s more a figure of quiet menace – but there’s one moment where the kids evade his grasp, and he shrieks like a rabid animal and you’re reminded just how dangerous he is.  But it’s just that one moment – then he goes back to his careful pursuit, staying just out of sight in the shadows and singing “Leaning On The Everlasting Arms” to scare his prey.

Literally the only complaint I have is with a final scene – it’s a sort of happy-ending epilogue, showing John and Pearl’s spending their first Christmas as part of Rachel Cooper’s brood.  It does show that all turned out well for the kids, and it does give Gish some moody lines about the endurance and resilience of children, but it feels a little long and unnecessary; after all, most fairy tales end with a simple statement that “they all lived happily ever after” without giving us details.  But the rest of the film is so brilliant that this is a minor complaint at best.