If Kiss Me Deadly had ended about 20 minutes sooner, it would have been one of the most amazing endings to a film noir I’d ever seen. (Fair warning that I’m going to have to spoil the film a bit to explain why, but I’ll hold off as long as possible.)

Based on a pair of Mickey Spillane novels about his detective “Mike Hammer”, the film stars Ralph Meeker as Mike, who in this story is a seedy private detective catering to divorcing couples. He works in a team with Velda (Maxine Cooper), sometimes his secretary and sometimes his girlfriend; if the wife suspects her husband of adultery, Mike sends Velda in to lure the husband into a compromising situation. If it’s the husband suspecting his wife, Mike does the job himself. It’s icky work (and Velda isn’t too thrilled about it), but it keeps Mike well paid.

One night, Mike is driving alone north of Los Angeles when a barefoot woman dressed only in a trenchcoat throws herself in front of his car, then begs for a ride. Mike is annoyed but agrees – she’s clearly in distress. Introducing herself only as “Christina”, the woman (Cloris Leachman) eventually confesses that she escaped from a mental institution, but she had been placed there under false pretenses because of “what she knows.” Mike is intrigued, but Christina refuses to tell him for his own protection. “Just get me to the nearest bus stop and forget you ever saw me,” she insists.

But they never make the bus stop – another car cuts them off, and both pass out in the crash. When Mike comes to, he’s tied to a bed in a strange house, and Christina is being tortured to death in the next room. Mike plays dead himself – which leads to him and Christina’s body being stuffed back into his car and pushed off a cliff.   Miraculously, Mike survives the second crash – and when he recovers, he’s determined to investigate, if only to get revenge on the people who hurt him. He ignores the local police when they urge him to sit this one out. However – the FBI then steps in and also asks him to drop the case. But this just makes Mike more determined – if the FBI is involved in the death of a random hitchhiker, something really big must be going on, and he wants to know more. 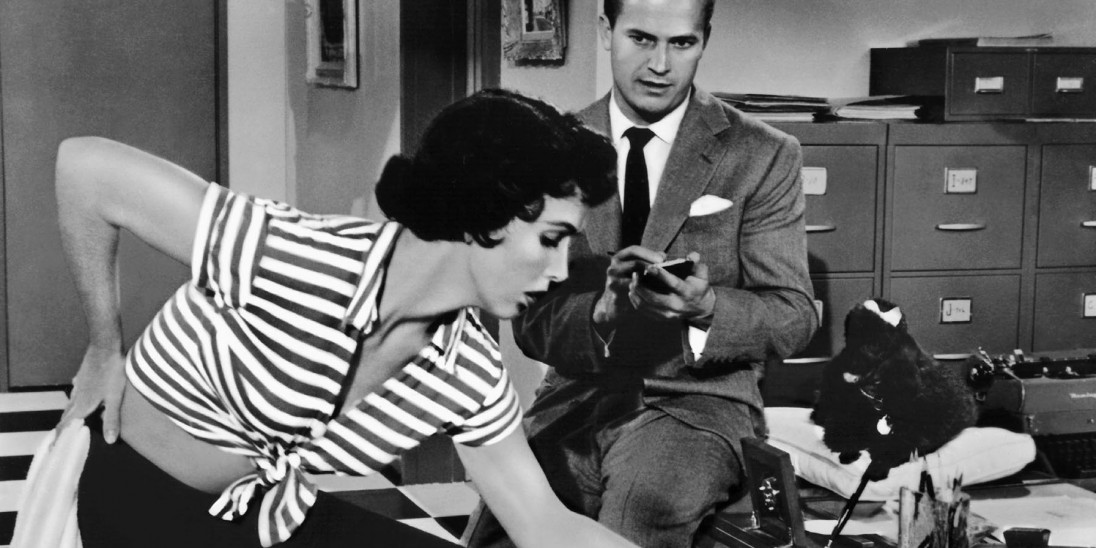 Most of the action features standard noir tropes; femme fatales who try to distract the detective (Gaby Rodgers, as a woman claiming to be Christina’s roommate), evading mysterious strangers, strong-arming witnesses to divulge what they know. Mike gradually learns that the people after Christina were hoping to get their hands on something she had; but we don’t find out what they’re seeking for quite some time. Velda starts referring to this something as “the Great Whatsit” hoping to downplay it in Mike’s mind and begging him to give up. But that just makes Mike all the more determined – and all the more nasty in how he treats witnesses (he starts out by just breaking one witness’ favorite record album, but by the end of the film he’s breaking another man’s fingers). 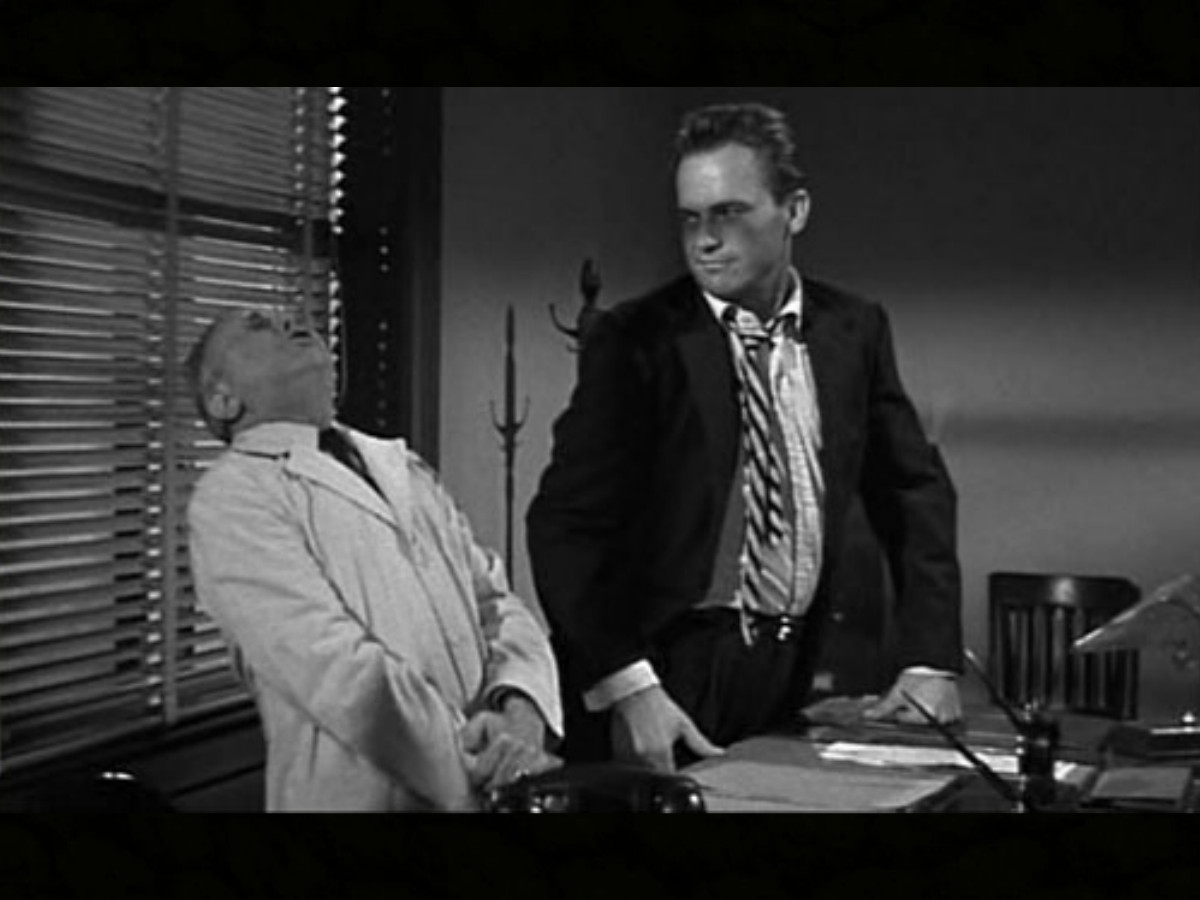 Eventually, Mike discovers what “the Great Whatsit” is. And what happens immediately afterward were the most intriguing scenes in the whole film.

The thing Christina had was a key to a gym locker – and when Mike opens that locker, inside is a lead box filled with radioactive material for an atom bomb. Mike takes one look and – wisely – realizes he is in way deeper than usual. Urging the gym manager to leave it there and to keep people away from it, Mike rushes to the chief of police and dazedly tells him what he’s found. The police chief – who knew all along that these were the stakes – lectures Mike for getting involved and causing more trouble, implying that the stuff in the box was stolen from the Manhattan Project test site. A gobsmacked and frightened-looking Mike protests that he didn’t know. “Do you think you’d have done anything different if you had known?” the police chief retorts, before leaving Mike to stew.

There’s another half hour or so of the film after this – the bad guys seizing both Velda and the box, Mike chasing after both, a last-minute squabble over the box, and Velda and Mike making an escape in an ending that felt very similar to a certain scene from Raiders Of The Lost Ark (to the point that I’m wondering if Spielberg intended it as an homage). But I really, really wish they had ended earlier, back with the police chief chewing Mike out – all because of that huge, huge shift in Mike’s tone. Up until then, Mike has been behaving just like a stereotypical film noir tough detective – roughing up guys, smooching up gals, blithely ignoring the authorities and assuming he knows better. In short, he’s acting like an enormous jerk, using brute force to get what he wants.

It’s the kind of act he could get away with before. But the dawn of the Cold War, of the atom bomb and the international espionage it entails, raises the stakes far above what Mike knows how to handle – and in that scene, he realizes it, and he’s scared. Even more significantly, he’s chastened – he realizes his usual approach not only hasn’t worked, it’s possibly made things worse. That would have been a tremendous comment on how much the world of the 1950s had changed; things were far more dangerous, and the old ways of getting things done no longer worked, and probably did more harm than good. In a meta-commentary, it would also have been a comment on how the old film noir tropes themselves no longer fit – the bad guys might be governments as opposed to underworld criminals, and the Great Whatsit people were after might be a world-destroying weapon. The usual above-the-law vigilante tactics that private detectives used were now dangerous.

I have since learned that the filmmakers planned for yet another different ending than the one I saw – there’s still a showdown over the box, but the reaction triggered by the tussle kills everyone involved – including Mike and Velda.  That also would have impressed the hell out of me, but not as much as that quieter ending with Mike sitting poleaxed in the police station. 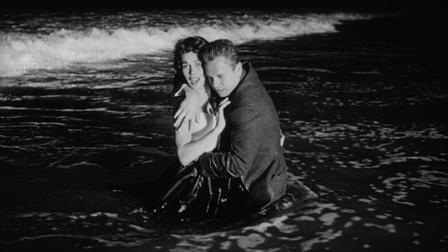 Roommate Russ and I talked a good deal about the ending. He pointed out that the filmmakers would never have had the self-awareness to let the film end that way, and he’s right. Still, I wish they had – the world of Kiss Me Deadly was profoundly different than the world that came before, and for a moment they acknowledged it.