It was some hair that got me.

In 1955, ten years after the Allied forces liberated the various Nazi concentration camps, French film producers Anatole Dauman, Samy Halfton and Philippe Lifchitz were invited to a museum exhibition addressing the concentration camps and their impact on the German economy. The exhibit’s curators, Olga Wormser and Henri Michel, had initially been asked to focus on the liberation of France – but chose to examine the camps instead. For many it was a first look at the horrors that had lain within – but for another great many, it was a reminder of things they had seen and survived, and the survivors had been seeking out Wormser and Michel to add to the story.  With the new information from survivors, Michel was hoping to turn the exhibit into a film somehow.

The team enlisted director Alain Resnais – who initially turned down the project because he felt a survivor would do better.  When the team persisted, Resnais finally agreed on the condition that the French novelist Jean Cayrol, a survivor of the Gusen camp, be brought in as a consultant. About midway through, the curators of the then-new museum at the Auschwitz camp site also weighed in.

What the team came up with was a deceptively simple look at the life inside the camps, illustrated through salvaged photos, Nazi footage of prisoner transports, and Allied footage showing the carnage and devastation after the fact, combined with contemporary footage of some of the ruined and abandoned camps.  A near-minimal level of narration guides us around the abandoned camps to point out the various buildings, pointing out the silence and the peace there today, before jumping back to some stock footage showing how the ruined building we’d been looking at functioned as the barracks, or the crematorium, or the piss-poor hospital.  We start with the transports rounding up deportees, move to the selection inside the camps where prisoners were separated into those able to work and those not, and are quietly introduced to the various people there – prisoners, Kapos, SS Soldiers, Commanders and their wives. We learn about the various work details, introduced to the meager rations prisoners received, and discreetly told about the women forced to work in the on-site brothel for the entertainment of the single soldiers; all through a mix of footage old and contemporary.

I don’t remember when I was first made aware of the Holocaust, or the extent of its cruelty; certainly by the time I was thirteen or fourteen. I’ve therefore seen a lot of the photos already, knew most of the stories.  So a good part of my response to this was more intellectual – sort of a distant analysis of how the filmmakers were deftly switching between footage, comparing the footage of the past to the sites today.  Early on, the biggest surprise I got was seeing just how banal a lot of it looked – many of us may have some kind of internal imagining of a “Nazis rounding prisoners onto the boxcars” scene, usually something chaotic with lots of angry, shouting Nazis, people being all but manhandled towards the trains and shoved inside.  But the footage Night and Fog shows is far calmer – deportees wandering back and forth, trying to find the car they’d been assigned; S.S. Officers comparing notes, frowning at pieces of paper that may have been troop lists or schedules.  One shot even shows a man hurrying towards a car as they’re about to close the door, and the people inside reach down to help him on board, as if it’s an Amtrak passenger car. 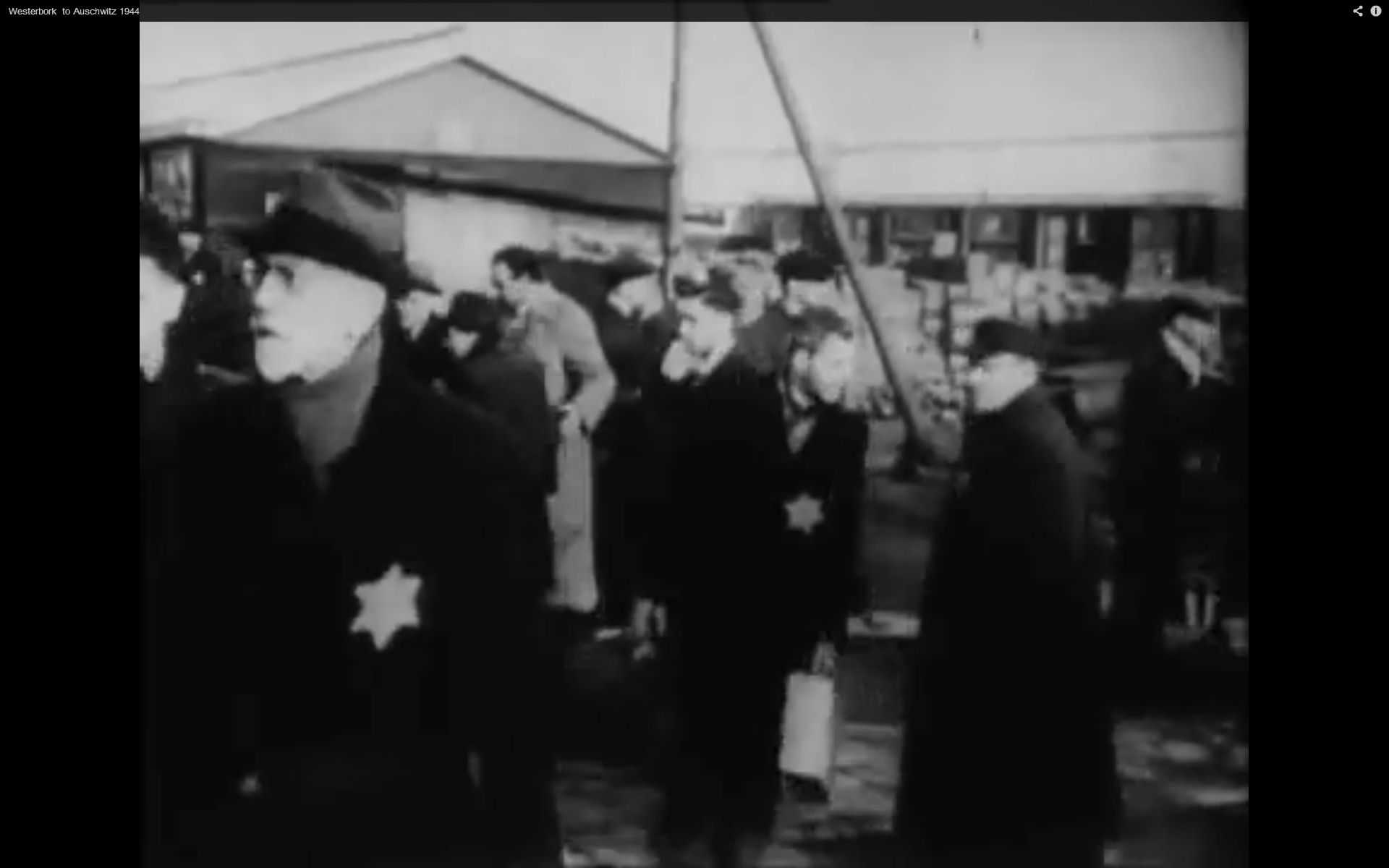 That banality was kind of the filmmaker’s point.  Towards the end, the film calls out “those of us who pretend to believe that all this happened at a certain time an in a certain place, and those who refuse to see”. Those who believe it was a unique and singularly terrible thing that happened – that it was a select and unnatural group of sadists who’d somehow set the whole thing in motion.  And yet, the film was seeking to remind us, the Holocaust was carried out by people – ordinary people, who followed orders.

And the Holocaust was perpetrated on people.  I was saying that it was the hair that got me – there is a shot towards the end, one of the things that the Allied soldiers filmed.  It’s a bit unclear when you see it at first – patches of some weird fibrous stuff – but the narration soon comes in to explain that it’s a pile of women’s hair.  And then the narration shuts up, as the camera pulls back further and further, to show us the size of the pile, and pans up….and up….and up….and up.  It is an enormous pile of hair, some of it still coiled into braids or buns, filling a cavernous warehouse in a series of mounds the size of sand dunes, each one taller than a two-story building.  Only after we have taken this all in does the narrator then go on to tell us that this hair was sold at 15 pfennigs a kilo – about a penny per pound in today’s money – and used to make cloth.

I’ve been to the Holocaust Memorial Museum in Washington DC, the Museum of Jewish Heritage in New York, and the Jewish Museum of Berlin. I thought I was immune to some of the images from concentration camps I’ve seen over the years, both fictional and non. But the size and scope of that pile of hair – especially knowing how many women’s heads must have been shaved to make it – chilled me, especially when the camera caught some of the variations in colors, despite the footage being in black and white.   The vast majority of the women who used to wear that hair all died, and their hair was being used for something cheap.  The film has far more graphic footage – bodies being bulldozed into mass graves, a basket of heads from decapitated prisoners – but the hair is what got me. 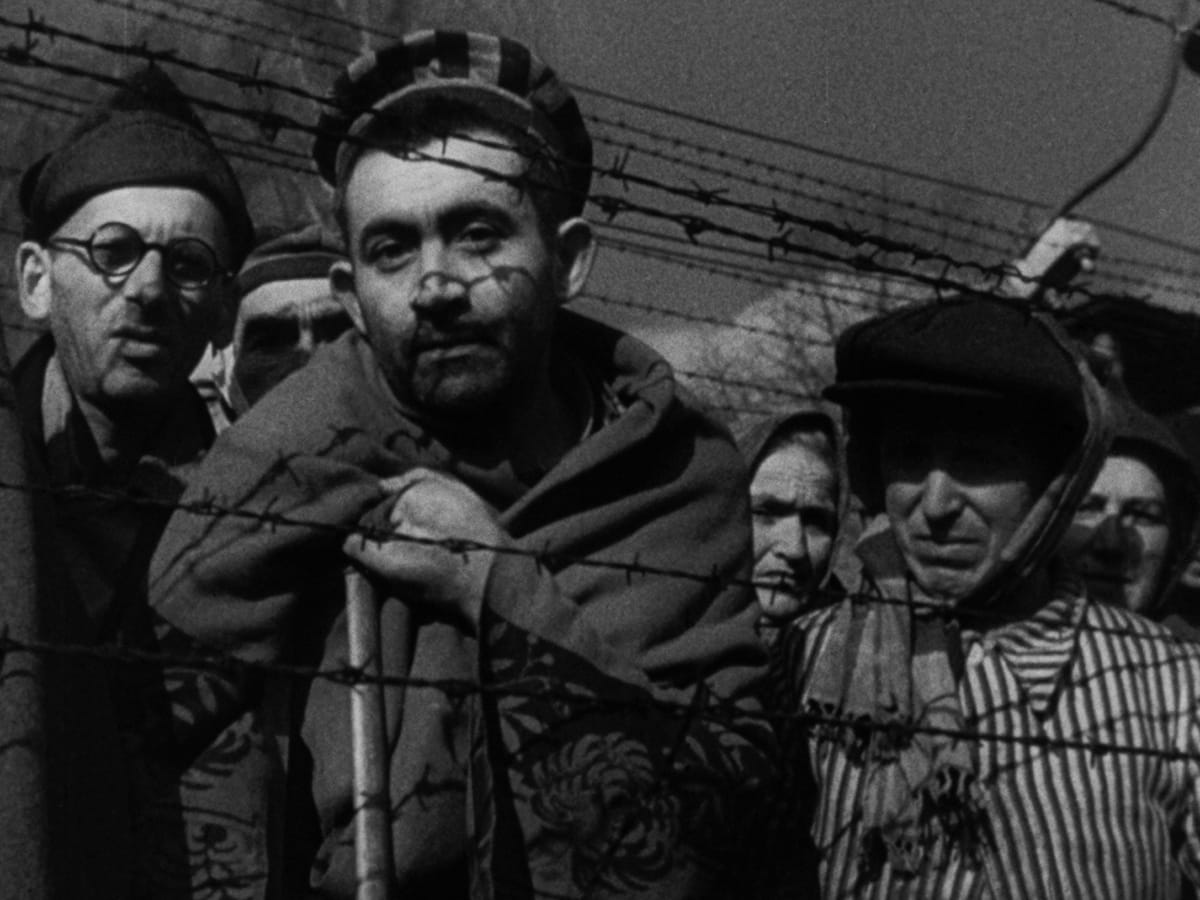 Just a few minutes after that the film had moved on to the soldiers and prison guards on trial, claiming that they weren’t responsible – and after seeing that hair I wanted to punch each and every Nazi, past and present, in the face.