I was quite grateful for the subtitles in this instance.  Not because it was especially wordy, or the dialogue was unusually heighted or complex, however.   Rather, I appreciated that it gave me something other than the main action to look at when I was getting queasy.

The Mad Masters’  director, ethnologist and director Jean Rouch, referred to this short documentary as a “docu-fiction”, and is said to depict a possession ceremony amongst a group of Hauka in Ghana.  The Hauka movement was a religious movement that was big in French Colonial Africa, in which practicioners go into trances and then are possessed by the spirits of various European colonial government figures, and then do a series of stylized imitations of the various colonists’ busywork – meetings, parades, and such.  Rouch actually begins with some brief footage of daily life in his chosen group, speaking of how many of them were young unmarried men who’d come to the city in search of work, finding it only in places like the sanitation department, field labor, or diamond mines.  He visits his practitioners again the day after the ceremony, showing us how the “Supreme General” from the ceremony was an army private, the High Priest was the foreman at a salt mine, the “Captain of the Red Sea” was a ditchdigger with the city water department, and so on.

Now, the point that Rouch claimed to be making was that the Hauka’s actions were a sort of funhouse mirror being held up by the practitioners, to rebel against their colonial masters.  And I was already getting that with the introductory footage; it’s not that big a leap to get to that particular conclusion.  However, the bulk of the film consists of actually showing us, in detail, such a ritual.  And that ritual gets really, really graphic and gory.  There is animal sacrifice – two chickens, a goat, and – towards the end – a dog.  The “possessed” practitioners regularly try to prove they’ve been possessed by attempting to set themselves on fire with torches. And all of them are frothing copiously at the mouth – great sheets of white spit blanketing their chins, to the extent that even just typing that last phrase is making me feel queasy. Rouch does issue a mild warning about the violence at the outset of the film, but it’s still really hard to see.

(Don’t worry – I have not included any such images in this review.) 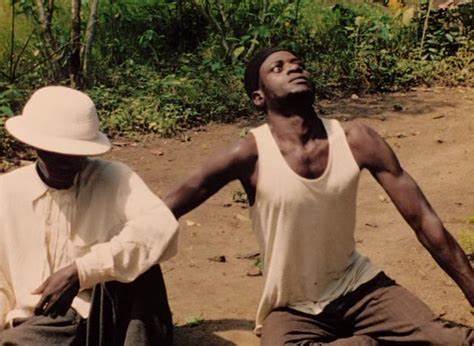 I’m on the fence about this film so hard, as were most audiences then – and as are people still today.  There are probably those who sniff at my reaction and write it off as a frail delicate white liberal reaction, and that I am someone who isn’t willing to look at the criticism of others directed against my race.  There are probably also those who argue back that this is some kind of gore porn, and is in turn exploiting the Hauka.  I’m leaning a bit towards the latter, to be honest, but only because I’m not finding any definitive statement from the Hauka participants where they say that yes, they asked Rouch to film and publicize their rituals.  They’re all smiling at Rouch’s camera towards the end, but – is that compliance?  I can’t be certain.

However, I definitely also see the former side.  The British and French colonization of Africa was devastating, and left a lot of people feeling completely powerless for a long time.  That doesn’t reflect well at all on people of my particular ethnic makeup, and frankly I think the more done to confront colonizers’ actions, the better. Even if it’s just taking them down a peg – one of the few times that Rouch cuts away during the ceremony, it’s to explain why one of the rituals involves smacking an egg on top of the “Governor”‘s head during the ceremony.  It’s because the shells left behind are an echo of the ridiculous feather-topped ceremonial hats the governors wore, as Rouch shows us by cutting to a clip of one such colonial governor exiting a car and marching into his mansion amid much pomp and circumstance.

Still, the third thing to consider is one’s own threshold for gore and icky stuff.  That’s a gut-level thing, often having nothing to do with politics, racial history, or any intellectual reaction.  Sometimes it’s just a matter of the sight of foaming spit making you feel queasy. (Like just now, again – gulp.) I’m fairly certain that the reader will not take this reaction as any kind of indicator of my faculties as a film scholar; and for those that do want to write me off as having been “triggered”, then fine.

Conceptually interesting, but I will never watch this again.