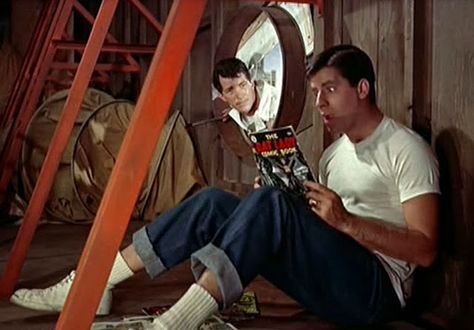 That may not be anyone’s fault.

I definitely found it unenjoyable; the plot is messy and confused, the gags are hokey, the songs mawkish, the performances uneven.  It stars Dean Martin and Jerry Lewis as “Rick Todd”, an aspiring painter, and “Eugene Fullstack”, a hopeful childrens’ book author who is obsessed with comic books.  Initially it’s a kooky rom-com once Rick and Eugene meet their upstairs neighbors – Abigail Parker (Dorothy Malone), a professional comic book artist, and her roommate Bessie (Shirley MacLaine), an astrology-obsessed secretary (to Abigail’s publisher) who also serves as the model for Abigail’s most popular character, “Bat Girl”.  Rick is drawn to the suave and successful Abigail – and to her connection to success – while Eugene, a massive Bat Girl fan, pursues Bessie.

Apparently that was too straightforward a plot. Because we go on to see Rick launch a comic of his own, based on the bizarre nightmares Eugene has when he sleeptalks; Abigail enlist Eugene as “Exhibit A” in an anti-comics protest; and an espionage subplot when Rick’s comic coincidentally prints half of the serial number of a top-secret spy plane, sending both the CIA and the KGB after him.  And that’s all on top of a series of cutsey song-and-dance numbers, from a mawkish ode to make believe Eugene sings to cheer up Rick to an impassioned aria Bessie delivers to an oblivious Eugene.  There’s a whole sequence where Eugene ends up at a massage therapist that somehow turns into a quasi-tantric game of Twister and I couldn’t even begin to tell you how it happened. 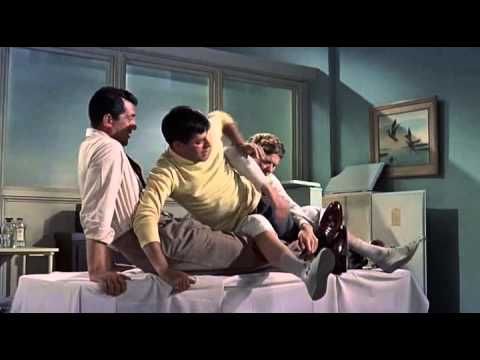 Now, if the plot were a mess but the performances were enjoyable, I’d still get something out of it.  No such luck here – this is the first Martin and Lewis film that’s made it into the list, and is also the first Martin and Lewis film I’ve seen.  And….it lost me.  Martin seemed stuck in only a couple of modes – either he was Lewis’ nondescript straight man, or he was trying to woo Abigail.  But that’s still better than Lewis’ single mode of “rubber-faced manchild”.  Yes, okay, I grant that there is indeed a place for Lewis’ style of comedy – silly looks, goofy voices, slapstick and pratfalls and the like.  But it just plain wasn’t to my taste, and what made things worse was that it was just so relentless – a constant barrage of mugging and squealing and hollering that was making me recoil from my screen at some points.  I try to focus on the films when I watch them, but in this instance I actually opened up Facebook and posted a brief note there just to put up some kind of barrier between myself and the onslaught.

But then I did a little research into the history of the Martin and Lewis comedy duo afterward.  Initially, I admit, it was fueled by wondering “what in the hell was the appeal here anyway” – and after reading up on them, I have a bit of a theory.

This is the first and only Martin/Lewis film on the list – but it is one of the last works the pair did together.  A year after its release, Dean Martin would quit the act – he ultimately got frustrated over continuously getting shunted into boring “romantic lead” parts while Lewis’s Zany Hijinks were brought front and center. Their initial act had been a good deal more balanced; they got their start in the late 1940s, when Martin was an aspiring night club singer and Lewis a comedian. They teamed up on a pre-arranged bit of schtick in which Martin would start his act and then face frequent interruptions from a bumbling Lewis, dressed as an inept busboy.  Their earlier material drew from vaudeville, slapstick and farce, both of them trying equally hard to crack each other up. This was the formula that won them their initial film contracts – but this was the same formula which their producers abandoned, turning Martin into a straight man and giving Lewis all the lunacy.  Martin rebelled – understandably – by phoning in most of his later works, which lead to friction with Lewis, which ultimately broke the pair up.

So what may have spoiled the film for me – in part – was this simple timing. This was the second-to-last of their films, which may explain why Martin seems to be sleepwalking for most of it while Lewis is in full-throttle-wacky mode.  It also explains why there are still flashes of what may have been the old spirit – like a moment when Rick and Eugene seal a deal by invoking the secret handshake from their childhood youth group, the “Kangaroo Patrol”.  Lewis is toned down, Martin gets to be a little silly, and they are locked into the same groove for a few seconds.

So I have to wonder – why was it that this Martin/Lewis film was what made it onto the list?  It’s not the best example of their work, the music and dancing is just sort of mediocre, the plot is impossibly complex – I can’t understand why it was this film instead of one of their earlier films.

Maybe the List is the reason I hated this.