I am strangely conflicted about Carmen Jones. On the one hand, it’s an unusually  good movie musical with an all-African-American cast, with some fine performances and a plot that avoids a stereotyping trap other such films might have fallen into.  On the other hand – it seems to have some blind spots about its cast’s talents.

Carmen Jones is the filmed version of a stage musical, which was itself based on the opera  Carmen by Georges Bizet.  On the whole, it’s a fairly faithful adaption that changes the trappings and leaves the plot alone; instead of being a free-wheeling bohemian in Spain, this Carmen (Dorothy Daindridge) is a vixenish single gal working at a parachute factory near a North Carolina army base in the 1940s.  She could have her pick of the soldiers, but sets her eyes on Joe (Harry Belafonte), the aspiring young corporal who’s just gotten a spot in the flying school on base and is about to go on leave so he can marry his girl Cindy (Olga James).  Carmen conspires to get her hands on Joe by picking a fight, prompting Joe’s C.O. to order him to deliver Carmen to the nearest civilian jail, one hours’ drive away.  Along the way, Carmen first tries escaping, but when that doesn’t work, she tries seduction.  Despite himself, Joe does give in – only for Carmen to slip out after. Joe is stripped of his rank and briefly imprisoned, but even worse, he’s now haunted by the memory of Carmen.

Strangely for Carmen, the feeling is mutual. She slips Joe some notes while he’s in the clink, telling him she’s taken a job at the local juke joint and asking him to look her up when he gets out. Her friends are puzzled by her newfound fidelity; even when the prizefighter Husky Miller (Joe Adams) takes a shine to her, she still turns him down, even after he offers her and her friends a free trip to his next match in Chicago.  She’s still holding out for Joe. Except when Joe does turn up, it’s only for a brief visit – he’s been reinstated in flight school, at a base 400 miles away, and has just enough time for one night to kick off what would be a long-distance courtship. Carmen tells him to stuff it and sets out for Chicago – prompting Joe to go AWOL and join her.

Though they’re smitten with each other, Joe and Carmen struggle in Chicago – Joe has to lay low to hide from the MPs, and Carmen suffers from the quieter lifestyle they’ve had to adopt; especially since Husky is all too ready to tempt Carmen to join him in more fun, more bling, and more freedom.   The more constrained Carmen feels, the more desperate Joe gets, and the more attractive an option Husky seems, leading this love triangle to a drastic end. 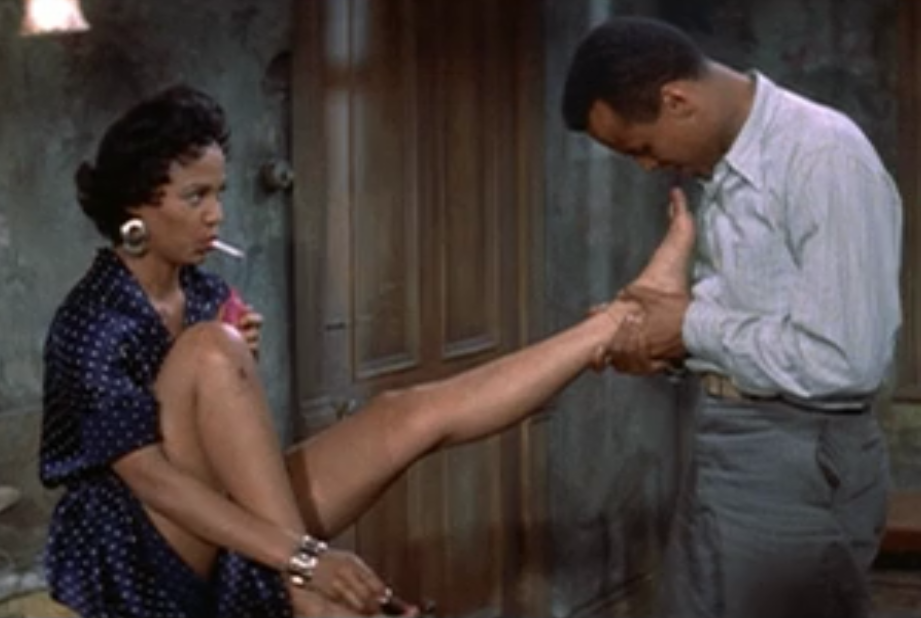 When I saw the cast, I was rather impressed.  Hollywood has not always been kind to its non-white actors, including only a scant one or two in its blockbuster films and confining them to supporting roles. If there’s a film with an all-black cast, they’re often cliché-ridden farces.  But here was a film with an all-black cast where everyone behaves like, well, people – and it was made in 1954.  Director Otto Preminger deserves some praise for this – he suspected that the studios would balk at a film with an all-black cast, and figured out a way to get the film financed independently.  Preminiger similarly figured out a way around the Hays Code inspector who thought that Carmen was a little too lascivious – he rewrote some scenes that toned down her behavior and shot them alongside the original script.  Preminger showed those scenes to the ratings team, and after he got their stamp of approval, he swapped back in the original scenes.

However, Preminger’s devotion to his vision lead to my biggest problem.  The film came about after Preminger attended a performance of the stage adaptation; while he liked the idea of a contemporary setting for Carmen, he found the theatrical adaptation dumbed the libretto down, and over-simplified the score out of deference to its non-opera cast.  So he resolved to put more of the “opera” back in, going so far as to update the score with more selections from Bizet’s work and adding back in more bits from the original plot.  Preminger also insisted that his leads sound operatic when they sang; but Daindridge and Belafonte, while they were singers, were not opera singers.  So Preminger had their singing dubbed, swapping in vocals by classically trained singers Marilyn Horne and LeVerne Hutcherson.  In fact, the only member of the cast who’s not dubbed is Pearl Bailey, as Carmen’s friend “Frances”, who gets a jazzy solo called “Beat Out That Rhythm On A Drum”.

Okay, Horne and Hutcherson are fine – and I understand Preminger’s devotion to his idea.  It’s true that Belafonte’s folk/pop style is not the same as opera.  But I’m so familiar with Belafonte’s own singing voice that it was profoundly distracting to see his lips moving and hear a totally foreign voice coming out, even if that voice was in a style that more closely matched the song.  (Besides, Aretha Franklin herself proved some years ago that you can sing an aria in your own style and still kick ass.)

So ultimately – I was intrigued, but I wished that Preminger had let everyone sing in their own voices.