The description that kept coming to my mind again and again while watching Sansho the Bailiff was “Dickensian.”  Which I admit is weird for a film set in feudal Japan.  But Sansho has a similar sympathy for the poor and downtrodden, executes similarly melodramatic twists of fate, and ends on a similarly sentimental note to many of Dickens’ works.

Heads up that the “Sansho” of the title isn’t even the main character, and he isn’t even a good guy – instead Sansho, played by Eitarō Shindō, is the villain for much of the story, and the catalyst that kicks things off.  In this period in Japan, it is explained, private landowners can kind of do whatever they want on their own turf, and the governors appointed by the emperor are supposed to respect landowners’ rights; but Sansho is a mean dude and the governor in his province tries to do something about it. The Emperor sides with Sansho, and the film begins as the governor is heading off into exile, sending his wife Tamaki (Kinuyu Tanaka) and two kids, Zushiō and Anju, to a safe house for a few years until they can join him.

Tamaki and the kids set out a few years later, but run into some bad luck when the priestess who puts them up for a night turns out to be in cahoots with some slave traders, so the “boatmen” that are supposed to take them the rest of the way instead take Tamaki to a brothel in a distant island, while Zushiō and Anju end up as slaves on Sansho’s estate.  Much of the rest of the film concerns Zushiō (Yoshiaki Hanayagi) and Anju (Kyōko Kagawa) trying to escape, find Tamaki, and get some payback; however, their zeal is often checked by their father’s teaching that “Without mercy, man is like a beast. Even if you are hard on yourself, be merciful to others.” Zushiō’s success ultimately depends on how closely he can stick by his father’s teachings, even when the cost turns out to be quite great – and the temptation to get revenge is even greater. 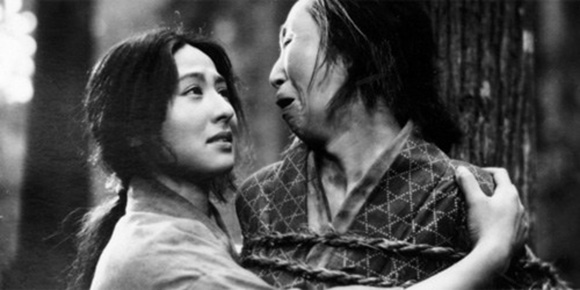 A lot of the plot twists seem to hinge on the kind of coincidental chance meetings that I feel Dickens uses a lot.  Sansho’s son Tarō (Akitake Kōno) hates Sansho’s cruelty and becomes a monk – and later, when Zushiō is looking for shelter, he turns up at Tarō’s monestary.  Anju makes friends with a new slave girl – who idly sings a song she heard a courtesan “back home” sing that mentions Zushiō and Anju, and that’s how Anju figures out where Tamaki is. Zushiō tries to appeal to the Emperor’s Chief Advisor for help, and is almost thrown out until the Chief Advisor recognizes something Zushiō has with him and realizes whose son he is.  And so on.

So the plot has a bit of heightened reality to it.  The cinematography seems to put this even further into the realm of fable – wherever we are, whether it’s the grotty slave quarters on Sansho’s estate or the lake where Anju makes a sacrifice, it’s beautifully shot, composed almost like a painting.  For me, I think this helped; I’ve admitted that I’ve been kind of lukewarm on Dickens in the past, but here, if the tone was getting a little too melodramatic or the coincidence a little too pointed, I ended up getting distracted by the beauty of the shot and things went down a little smoother.  Also, director Kenji Mizoguchi favors a much smaller cast list, so there aren’t quite as many kooky outsiders to get in the way of getting aquainted with the leads.

So I still come back to Sansho being a lost Dickens work that somehow ended up going to Kyoto for a while.