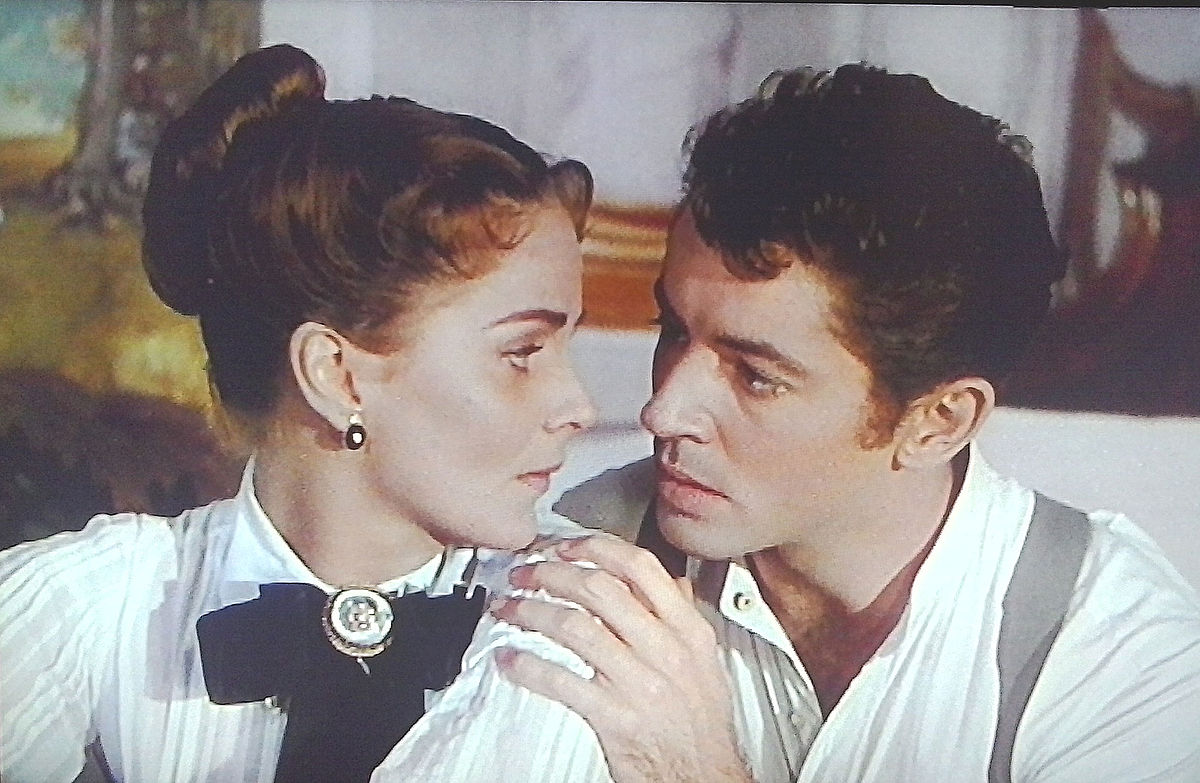 It’s fitting that Senso begins with a scene from an opera, with all the main characters watching from their various box seats.  The rest of the film quickly shifts into that heightened state of love, betrayal, and intrigue, with tragic consequences.

Things kick off at the Fenice Opera House in Venice, in 1866. Venice was still occupied by the Austrian empire, but nationalist sentiment – and a group of rebels – were working to join Venice with other city-states in creating the nation of Italy.  The rebel group smuggles leaflets into the opera with them, and at the climax of a big aria, they stage a dramatic airdrop over the crowd, with most of the leaflets falling onto the Austrian army soldiers in the front row.  The opera hastily calls an intermission and the audience fall to gossiping as the chaos is sorted out.  Countess Livia Serpieri (Alida Valli), an Italian married to a career diplomat, is troubled to discover her cousin Roberto (Massimo Girotti) lead the plot, and even more troubled when Roberto overhears an Austrian soldier talking smack about the Italians and challenges him to a duel.  Roberto’s fellow rebels smuggle him out of the opera house, but Livia still hopes to talk the Austrian soldier, Franz Mahler (Farley Granger), into dropping the duel.

Mahler actually seems pretty indifferent as to the duel; he tells Livia that the police will doubtless pick Roberto up for disturbing the peace soon anyway.  But – say, she’s awfully pretty, can he see her again?  Livia resists at first – she’s married, Venetian, and older than this young Austrian.  But – he’s pretty cute.  So a second chance encounter a couple days later turns into a night-long ramble and chat around Venice, during which Mahler sweeps Livia completely off her feet and they begin a passionate affair, meeting secretly in a rented room far from Mahler’s barracks and Livia’s mansion.  But Livia is so smitten she starts getting indiscreet – brazenly turning up at Mahler’s barracks looking for him, sneaking him into her house, even hiding him for a day in the granary in her country villa.  She even gives Mahler a big wad of cash that she was supposed to deliver to Roberto and the rebels, so Mahler can bribe a doctor to declare him too ill for combat.

The only trouble is that Roberto was going to use that money to buy arms, and the next battle is a crushing defeat for the Italians.  Livia is crushed with guilt from betraying her country, but instead of giving Mahler up she doubles down – sneaking out of her villa one night to join him.  In theory, Mahler was laying low in the Austrian-held city of Verona, waiting for the right moment to send for Livia so they could run away together. But when Livia unexpectedly turns up at his apartment, she quickly discovers that she’s been massively played…

So, this film looks beautiful. There are lots of beauty shots of Venice and the Italian countryside, especially when things shift to Livia’s villa; her quarters are lavishly decorated; the opera house is an impressive venue; and even Mahler’s quarters look much more civilized than your average army bunks.  And that’s just the sets – shot after shot is also staged beautifully, with characters dramatically posing in front of windows or racing down corridors or pausing to significantly turn heads.  The heightened drama didn’t really bother me either; usually that kind of soapy melodrama loses me. But Mahler’s final actions caught me by surprise.

The only complaint is that this film didn’t have quite enough….sex.  It’s understandable why it didn’t – this was the 1950s, when sensibilities were a little more prim.  But save for a few passionate kisses, and one scene when a sheet-wrapped Livia brushes her hair in Mahler’s room one morning, this story of a passionate affair is weirdly chaste, and I wanted the sex to be as all-out as the rest of it.  I found myself comparing this to the Ang Lee film Lust, Caution, which features a similar story of a woman caught up in a passionate affair that leads her to betray her country; the sex in that was so all-in that the film got an NC-17 rating, and I think that helped.  (Although, to be fair, I saw it with an ex boyfriend and…er, let’s just say the evening that followed was very pleasant, so I may have a bias.)

Not that I’m saying we also needed full-on full frontal scenes in Senso, mind. But one of the meanings of the Italian word “Senso” is “Lust”, and it is used in this sense to speak of the lust that drives Livia to her actions. But it’s a lust that is quietly hinted at as opposed to presented to us – it’s a strangely quiet note in a full-throated opera, and came through as a bit of a mis-step.