There’s no exact word for my gut reaction to Silver Lode – only a sort of peevish, unimpressed whine sounding something like myyyeaannnhhhh.

It’s not terrible.  It’s got a decent script, reminiscent of High Noon in that things kick off when the hero’s wedding in a small town in the old West is interrupted by the bad guys. In this case, our hero Dan Ballard (John Payne) is a rancher who rode into town two years prior with several thousand dollars, used it to buy a ranch, and has been living as an upright citizen since.  The “bad guys” in this instance are a scruffy-looking posse, assembled under newly-minted U.S Marshal Fred McCarty (Dan Duryea). McCarty reports that he became a Marshal just so that he could seek out Ballard – for the murder of McCarty’s brother, during a poker game.

Ballard shot in self-defense – and McCarty knows that – but the rest of the town starts considering that they really don’t know much about Ballard, and that was an unusually large nest egg he turned up with…and gradually the whole town joins in against Ballard, with only his fiancee Rose (Lizbeth Scott) and Dolly (Dolores Moran), a saloon girl Ballard used to canoodle with, on his side. 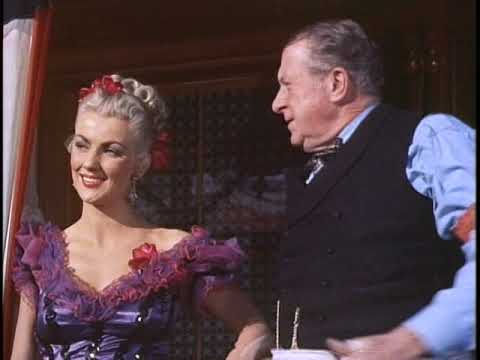 It’s also got some decent action, with one scene mid-film catching my eye in particular.  Ballard is trying to sneak across town from Rose’s house to the telegraph office, where he can wire friends to see if McCarty’s Marshalship is legit; but the entire population of Silver Lode is searching for him, with guns and horses at the ready. In one amazing single shot, Ballard manages to safely leapfrog his way through town, taking cover where he can – first in a neighbor’s gazebo, then scurrying along beside a passing stagecoach (out of sight of the driver), then diving under a picnic table, crawling to a second table, ducking behind a podium set up for the town’s July 4th bonanza, then scuttling to the church right as some riders pass, and then….it’s a wonderfully choreographed scene.

So it’s not terrible.  But….it’s not great, either.  The acting is fairly wooden and one-note, with Rose and Dolly coming across as more like caricatures than characters.  Even when they try teaming up to help Ballard at the end, they’re still kind of simplistic performances. But then everyone’s is; Ballard rarely leaves the square-jawed taciturn hero mode, the Ladies’ Temperance Society members who promote the turn on Ballard are prissy shrews, McCarty does everything with a mean leer that all but telegraphs “This Is A Bad Guy”.

And much like that action scene I admired, there’s even an action scene that lost me; much as with Detour, it is an improbable sequence of events that seems expressly designed to set Ballard up in a room with a corpse and a gun, so the rest of the town can catch him fake-red-handed.  It also seems like it’s setting Ballard up for some scene-chewing towards the end, where he can snarl at everyone for doubting him.  The McCarthy allegory is kind of obvious.

So it’s…serviceable. But it feels way more like the kind of thing that would be on Saturday afternoon “Olde Movie Hour” programming on TV when I was a kid as opposed to being a cinematic classic.