It’s just occurred to me – Hitchcock films are largely spoiler-proof by design.  I knew the general story behind  Rear Window going into this – it’s been parodied by other TV shows and stories before this – but still found it just as exciting.  Knowing the story didn’t ruin the suspense for me.

But Hitchcock himself said that that’s exactly how suspense is supposed to work.  If you’re watching a scene with a couple sitting at a table and talking, and then after a couple minutes a bomb under their table suddenly goes off, that’s a surprise.  But if you see there’s a bomb under the table and then you watch the couple sit down for that conversation, the whole time you’re braced for that explosion, whether or not it ever comes.  In fact, most of the time it doesn’t – but you’ve spent a couple of minutes on tenterhooks anyway because you saw the bomb and thought it might.  This isn’t to say that the entire movie is spoiler-proof, of course; there has to be just enough mystery to get you to care about what might happen, otherwise there’d be no story for you to watch. 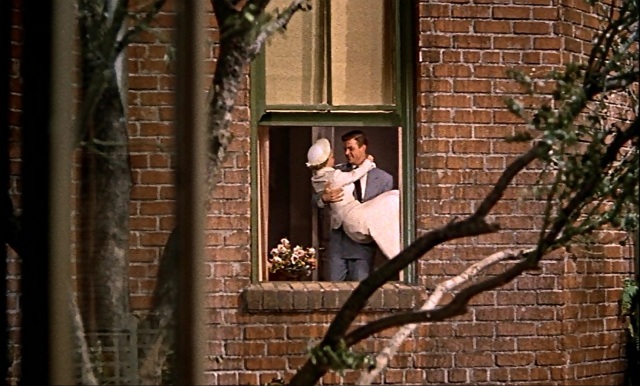 In this case, Hitchcock holds back some of the details by confining our view to just one window in an apartment belonging to photographer L.B. Jeffries (Jimmy Stewart).  Jeffries has been stuck in his apartment for a couple months as he recovers from a broken leg, and he has been bored out of his bloody mind. He does have occasional guests – his socialite girlfriend Lisa Fremont (Grace Kelly) pays occasional visits to cheer him up with catered meals, champagne, and some canoodling, and home-care nurse Stella (Thelma Ritter) visits for a daily checkup and some sass.  But Stella’s visits are brief and Lisa’s are infrequent, so Jeffries has taken to watching his neighbors, peering into the windows he can see from his own flat.  It’s mildly naughty, but Jeffries is getting a kick out of it, even nicknaming some – “Miss Torso” is a dancer prone to exercising in her underwear, “Miss Lonelyheart” is a middle-aged spinster who consoles herself by hosting dinners for imaginary boyfriends.  He relishes watching their stories unfold – the musician struggling to work on a symphony, the newlywed couple who always roll their blinds down when things are getting good, the salesman with the invalid wife who disappears the same night that the salesman starts cleaning a big knife in his kitchen –

Jeffries stays up all night watching the salesman make a bunch of suspicious trips, suitcase in hand.  He can’t be on a sales call, as it’s 3 am.  And his wife is missing the next morning.  Something’s wrong, he insists to both Lisa and Stella.  He even summons a detective friend to share his concerns.  But the detective says there’s nowhere near enough evidence, and Stella and Lisa both scold him for having an “active imagination”.  But Jeffries keeps watching as the salesman’s actions get more suspicious.  He even convinces Lisa to watch with him one day, convincing her at last – and they concoct a plan to get him out of the building so she can sneak down to the salesman’s garden, where it looks like he may have buried something.  That mission’s a bust – but Lisa spontaneously decides to climb the fire escape and sneak in the salesman’s window, where she is searching for clues just as Jeffries sees the salesman returning….

I guarantee somewhere in there you not only recognized this plot, but thought of another pop-culture thing that referenced it.  (For me, it was a Simpsons episode.) That makes not one bit of difference in the suspense, I am happy to report.  You know what is happening – the fun is in watching how things unfold, in watching the story behind what you see.  You know that the salesman seems suspicious, but how can Jeffries prove that?  You’re pretty sure Hitchcock won’t kill off Lisa when the salesman returns, but how can Jeffries save her?  ….Will he save her?

If I have any complaints about Rear Window, in fact, it’s with Lisa herself – and the relationship she has with Jeffries. Early on, she comes across as a bit of a pampered ditz – pretty, but a little spoiled.  A number of her earlier scenes with Jeffries are a bit of kitchen-sink drama with her complaining that Jeffries won’t commit, and how he’s taking overly-dangerous news assignments instead of nice safe fashion photo jobs, with Jeffries complaining that she’s far too high-class for the likes of him.  Kelly’s performances are similarly a little one-note in these earlier scenes.  But when Lisa starts getting into the game, so does Kelly – and Hitchcock shows us with a brief reaction shot that Jeffries starts to really get into Lisa then.

It should also come as no surprise that the closing scene ties everything up nicely – not just for our main characters, but also all of the little dramas that we’ve seen play out in the fringes; we get to learn what happens to Miss Torso and Miss Lonelyheart and the newlyweds in one last look through all their windows before the curtain comes down.  And even those brief glimpses are satisfying, which itself speaks well of Hitchcock’s skill.