So, you know this story.  Most likely because you saw the recent remake with Bradley Cooper and Lady Gaga.  Or maybe you saw the 1976 remake with Barbara Streisand and Kris Kristofferson. Or, heck, maybe you saw the 1937 film that preceded them all.  But you know the drill – talented young woman who wants to be in show biz meets a washed-up star struggling with addiction, he launches her career, they fall in love, and so they both cope with the strain when his star falls as hers rises.

The 2018 remake was the first I ever saw, and what sucked me in were some smaller moments throughout – little riffs between Lady Gaga and Cooper, a surprise cameo from Dave Chappelle, an adorable moment when Lady Gaga’s “Ally” and her BFF “Ramon” are both on “Jackson Maine”‘s private jet and are completely flipping their lids.  Yeah, there’s music, yeah there’s heartfelt speeches and Big Drama and such – I liked the moments where you get a glimpse of the tiny shared stories that these people were creating with the ones they loved, be they the story of Ally and Jackson, the story of Jackson and his older brother, or the story of Ally and Ramon or whoever, and the songs were secondary.

Which is why the most fascinating number in this version of A Star Is Born is when you get one such moment in a song.  For many fans of this version, the “big showstopping number” might be when Norman Maine (James Mason) first sees Esther Blodgett (Judy Garland) singing “The Man That Got Away” in an after-hours night club, and is sufficiently blown away to the point that he tells her she can be Something Big.  Or it might be the “Born In A Trunk” sequence, the 15-minute extravaganza mid-film which serves as Esther’s debut.

For me, though, the highlight came towards the end, where Esther is showing Norman the big number she’s been working on for her latest film while he’s been puttering around the house. He’s been recently sacked by the studio, and has been puttering around in their mansion, grumpy and bored out of his skull, occasionally fielding calls for Esther. But when she comes home he perks up, they bond over show-biz gossip before Esther offers to show him the number she’s been rehearsing.  What follows is a solo tongue-in-cheek version of the kind of kooky “production number” common to Hollywood musicals at the time – elaborate choreography, inexplicable tone shifts, lavish costumes – and somehow Judy Garland manages to convey all of that by herself, in a plain shirt and leggings, cavorting through the Maine/Blodgett living room.  Even better, she manages to throw in just enough over-the-top camp to suggest that she thinks the whole thing is a little ridiculous.  But just a little – it’s not an overly-broad and obvious poking fun, it’s a subtle tease, just enough for someone on her wavelength who shared the same sentiment to pick up.  Like Norman would.

And I was fascinated, and learned more about Norman and Esther in those six minutes than I did the whole rest of the show.  Every other number was a more obviously staged thing – “Here’s What I’m Here For” was just an excuse to get Judy Garland to sing again, as was “A New World”, which Esther sings to Norman the night they marry.   Even the famed “Born In A Trunk” left me cold.  But this grabbed me. 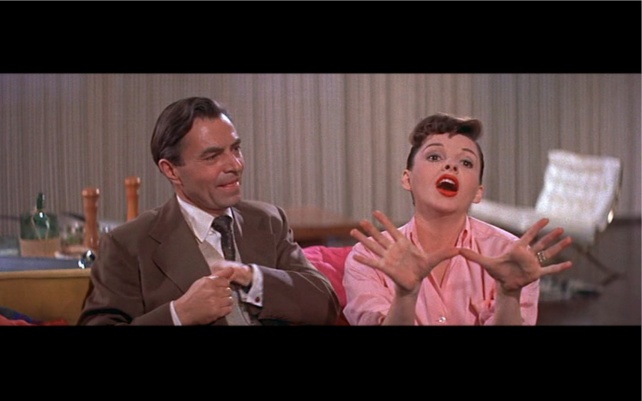 I admit that I generally have a bit of an aversion to that kind of over-the-top production number.  Not just here – I kind of glossed over the singing in the 2018 A Star Is Born as well, I must admit.  I’m also a bit lukewarm on Judy Garland – I respect and acknowledge her expertise, absolutely, but an appreciation for her skill is pretty much all I have.  She’s never been someone who grabbed me emotionally, at any point in her career.  Which is why that number caught me off guard – she was having fun, with a sincerity and genuineness that surprised me and just for a moment made me wish that Esther and Norman could stay in that little charmed soap bubble moment, and made me all the more sorry for them both when the phone rang again, and it was for Esther and not Norman, and the bubble popped.