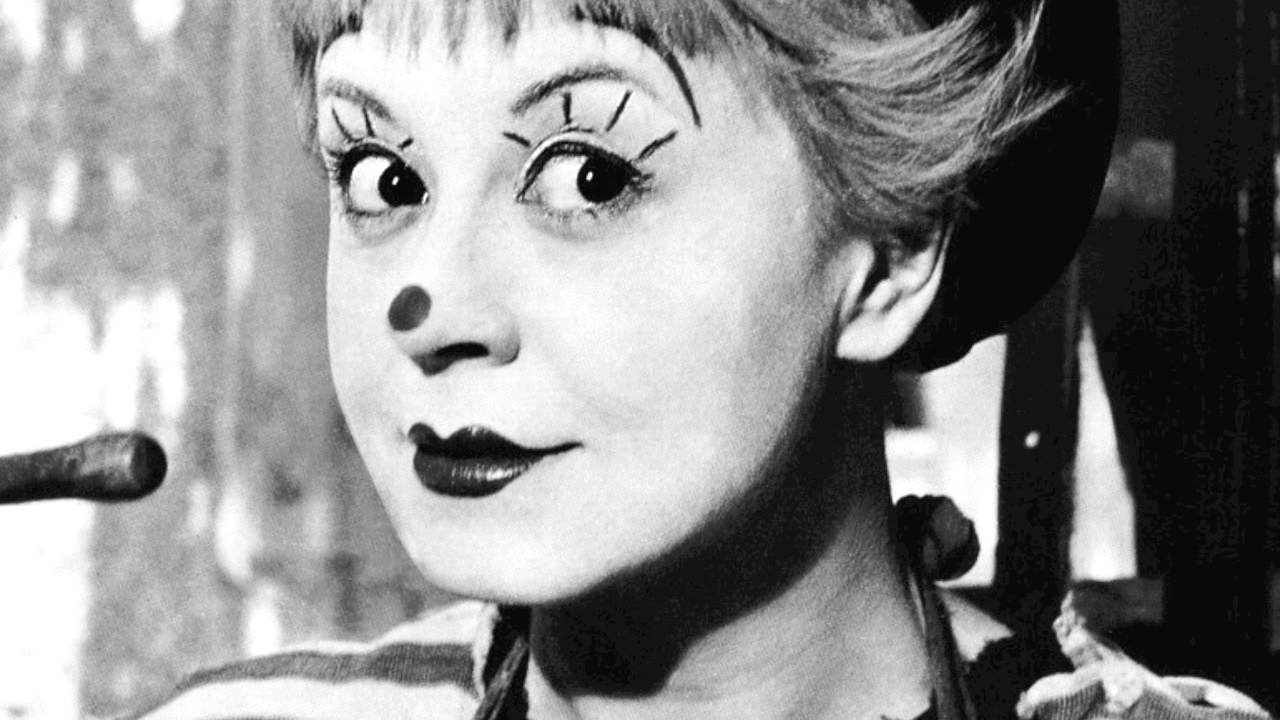 Gelsomina (Giuletta Massina), a young Italian woman, is gathering firewood on a beach when her younger siblings come for her – the family has a visitor, and she’s supposed to come home right away. When she rushes home to their family’s beachside shack, her mother explains that her older sister Rosa has died, and then introduces the glowering visitor (Anthony Quinn) as Zampano, a circus strongman who was with Rosa.  But then the mother turns to Zampano.  “You see how she looks like Rosa?” she says of Gelsomina. “She came out a little strange, but she needs a trade….” she urges Gelsomina to go with Zampano, telling her she’ll travel the world with him.  And as Gelsomina excitedly smiles, Zampano hands her mother money, and Gelsomina’s fate is sealed.

And thus begins our tale, with the naïve Gelsomina sold into servitude to the seedy Zampano.

Honestly, with a kickoff like that, I thought it was going to be difficult to watch.  Not that it wasn’t – Zampano is a lecherous drunkard, and he trains the simpleminded Gelsomina by beating her, but I was afraid that there would be some kind of sexual angle to her servitude.  Thankfully there wasn’t; Gelsomina is such a childlike character that it would have been even more horrific than usual.  All he wants Gelsomina to do is to introduce his act and serve as his assistant – dressing up as a clown, playing a simple tune on a trumpet, and doing some stagey banter.

But he still mistreats her, leading to a brief escape during which she meets another street performer, an acrobat and clown calling himself “The Fool” (Richard Basehart) who briefly shows her some kindness. She remembers The Fool later on, after Zampano has recaptured her and ends up getting himself and Gelsomina work in the same circus with him.  She’s tempted to run away with The Fool, but he somehow convinces the lonely Gelsomina that Zampano needs her more – or, at least, that that’s what her purpose is, is to serve Zampano.  Even so, he agrees that Zampano’s a jerk – so much so that he keeps poking fun at the strongman, which finally leads to a dangerous clash.

It’s a tragic story.  But largely so because of Giuletta Massina, wife of director Federico Fellini.  He created the character based on Giuletta – or, more accurately, on how he imagined Giuletta was like when she was ten, and was going through that phase some kids go through when they want to run away and join the circus.  That’s exactly how Giuetta plays Gelsomina – as a wide-eyed child, so captivated by her dreams of adventure she doesn’t realize she’s being sold into slavery, and so lonely after a while that she looks to Zampano as someone to love her and take care of her.  It’s such a childlike character that any hint of sexual abuse would have had me profoundly shaken, even though Gelsomina was likely in her early 20s.  That’s also probably why it doesn’t happen.

Also, Zampano doesn’t seem to be that kind of guy anyway. He’s a jerk, for sure – insulting Gelsomina’s intelligence and whipping her when she gets out of line, and brushing off any overtures of kindness she extends him.  He doesn’t see her as a woman, he sees her as more like an unruly mule.  But somehow by the end he comes across as just as much of a tragic character as Gelsomina – lashing out at her, sure, but maybe he’s lashing out because he’s washed up.  He’s no mental giant either, if we’re being honest; in one scene, where the pair seek shelter for the night in a convent, they’re welcomed in by the sisters and treated warmly, but Zampano is still tempted to try to steal some of the convent’s silver in the middle of the night.  (At least Gelsomina has developed enough of a backbone by then to refuse her help.)  Even though Zampano is supposed to be a strongman, Anthony Quinn plays him as more of a grump meathead than as someone genuinely cruel.   He mistreats her, but…you kind of sense that this is genuinely the only playbook he knows.

Film scholars note that this is kind of like the ur-Fellini film, a first fanciful step away from the neo-realism that was big in Italy at the time. I’ve seen the occasional clip of Fellini’s later stuff, and this did indeed seem more realistic; but honestly I was more entranced by Gelsomina herself, whose trip to Neverland crashed soon and left her high and dry.