This was a good film that I really wish had had a different backstory.

Terry Malloy (Marlon Brando) is an ex-prizefighter who now works as a longshoreman in Hoboken. His big brother Charley (Rod Steiger) is second in command to the dock’s union boss, Johnny Friendly (Lee Cobb); “Friendly” is anything but, as he’s borrowed a trick or two from the Mob, and milks the longshoremen for loyalty payments, kickbacks, and other financial treats, using Terry as the muscle when needed.  Terry’s an uncomplicated meathead and doesn’t sweat it – until the day he’s asked to lure another dockworker, Joey Doyle, into an ambush. Terry thinks they’re just going to “rough him up”, so when Joey is killed instead it comes as a shock. 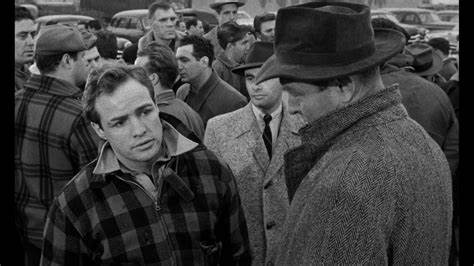 Terry uneasily tries to put the event out of his mind; Joey was on the verge of ratting to the police, breaking the “deaf-and-dumb” policy the dockworkers were living by. But he keeps running into two other people doggedly investigating Joey’s death – Father Barry (Karl Malden), the blunt-talking priest ministering to the dockworkers and their families, and Joey’s innocent sister Edie (Eva Marie Saint), home for a visit from the Catholic university where she’s studying.  After witnessing Joey’s death, Edie reaches out to Terry – an old friend of Joey’s – to see what he might know. But Edie is also lovely and sweet, so Terry is drawn to her for very different reasons. But even more significantly, Edie treats him with respect and dignity, and is possibly the first person in Terry’s life to do so; even Charley’s exploited him in the past, having once urged Terry to throw a prize fight in exchange for easy money.  So when the police come to ask Terry about Joey’s death, Terry finds himself re-examining his loyalties carefully. 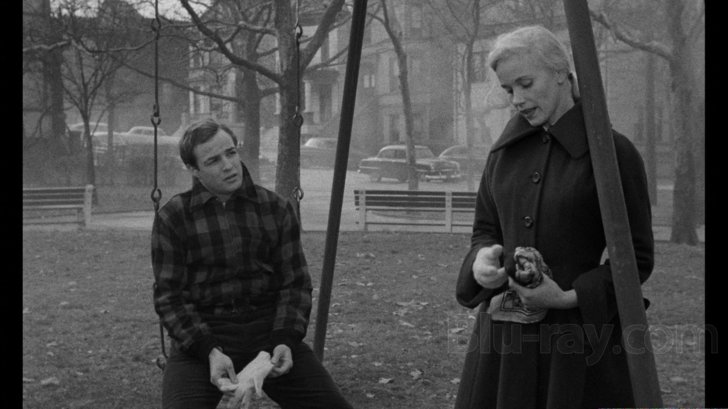 So, I already knew that Brando was one of the first to introduce “Method Acting” into film.  It’s the training that I went through in my own acting-school days, and I even learned from some of the same teachers, so Brando’s name came up in class a lot.  But it’s not until now, after seeing what other actors were doing before, that I understand just how gripping, and revolutionary, Brando’s performances were. The scenes between Terry and Edie have something to them – a freshness, a “realness,” that kept me riveted; Brando is always doing little instinctive things that flesh his character out into being more of a “person”, like playfully trying on one of Edie’s gloves or giving her flirty winks or brushing hair out of her eyes.  The famous “I coulda been a contender” scene is similarly striking; I’d had the impression it would be a big, histrionic Oscar-baity speech, but Brando delivers it quietly, with a deep sadness.  It makes much better sense – Terry is confronting Charley at long last, mourning what they both could have been. It’s not a time for histrionics.

The story itself also unfolds nicely; Terry’s growing unease with Johnny Friendly, Father Barry’s efforts to rally the other dockworkers to stand up to him, Edie’s growing influence on Terry and her dogged efforts to find her brother’s killer.  It was in part inspired by actual accounts of labor racketeering on the docks along New York Harbor, with Terry, Father Barry, and Johnny Friendly all having real-life counterparts.  New York’s Waterfront Commission was even conducting hearings into racketeering during filmmaking, and screenwriter Budd Schulberg sat in on many sessions to take notes.  The ending is a little clichéd, but given what comes before, I can overlook that. 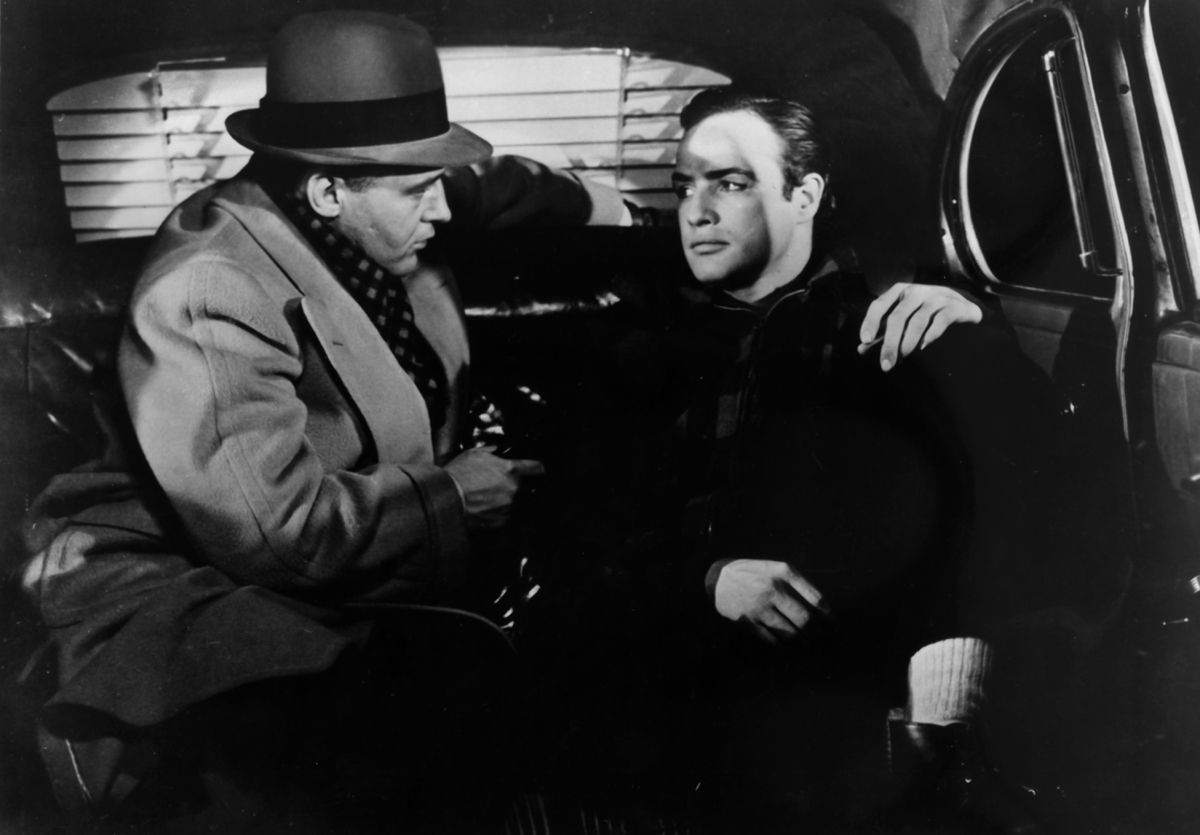 However, there’s another bit about On The Waterfront which was a bit tougher to overlook. While the story is about Terry wrestling with the choice to stand up to corrupt union bosses, the subtext – at least for the finished film – is that it’s also about director Elia Kazan’s choice to testify before the House Un-American Activities Committee (a.k.a. “HUAC”).  Kazan had briefly been a member of the Communist party in the 1930s, but quickly became disillusioned by the Party’s efforts to influence himself and other artists in New York’s Group Theatre.  HUAC was exerting similar pressure on Kazan two decades later, pressing him to name other Communist Party members, and Kazan had no loyalty for the Party any longer so he testified – hedging his bets a bit, though, by naming people he knew that HUAC already knew about.  His actions still caused him to lose favor among many of his friends and colleagues, including longtime friend Arthur Miller – who had been On The Waterfront’s original screenwriter. Budd Schulberg was only brought on after Miller quit in disgust at Kazan’s testimony.

Now, Kazan’s actual take on his testimony seems surprisingly understandable. He was sour on the Communist Party; he found a way to get off the Blacklist without giving HUAC any real new intel; he got back to work.  In that light, the people opposed to HUAC and the people ostracizing Kazan seem like big meanies.  But the film takes a more black-and-white approach, with the Communist Party equated with racketeering mobsters, his friends as the cowering and cowed dockhands, and HUAC is the force for law and order.  Given the ultimate outcome of HUAC and the McCarthy scare, that’s an ugly association.

And yet the film itself is clearly top-notch. 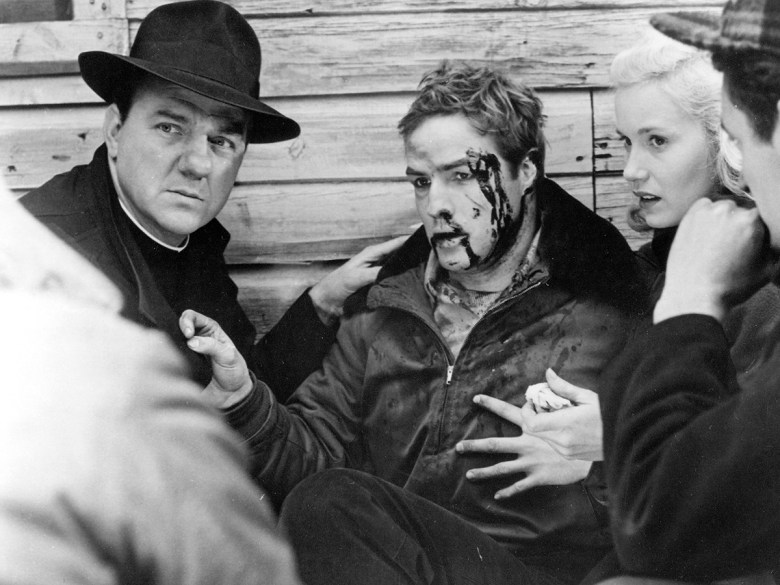 In 1999, I remember watching as Elia Kazan was presented with a Lifetime Achievement Award at that year’s Oscars.  As Kazan was walking to the podium to accept his award, the camera panned over the crowd – showing that there was a decidedly mixed reaction to his prize.  Some attendees, like Warren Beatty, Karl Malden, and Meryl Streep, were giving Kazan a standing ovation – but others, like Nick Nolte, Ed Harris, and Sir Ian McKellen, were sitting stone-faced, arms folded and refusing to applaud.  I knew about Kazan’s HUAC testimony at the time, and completely understood those who were refusing to clap.  After watching this film, I now understand those who were clapping as well.