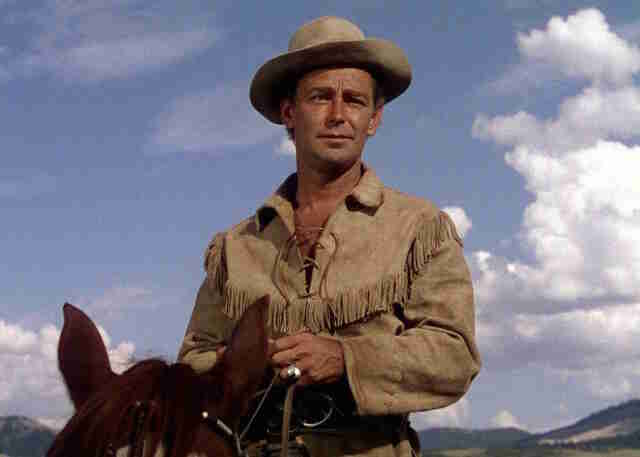 Presenting: the conversation I had with Roommate Russ immediately after  Shane finished.

Me: So, quick – tell me ten things that you learned about the title character.

Roommate Russ wasn’t wrong – Shane (Alan Ladd) may be who this film is meant to be about, but he is someone so mysterious that all we ever learn about him is that he’s good with a gun.  We never even learn whether “Shane” is his first name, his surname, or if he’s got some kind of mystic nickname thing going on.  He just appears one day, riding past the Wyoming homestead owned by Joe Starrett (Van Heflin).  Joe’s son Joey (Brandon deWilde) is awed by the stranger, but Joe’s a little more cautious; Starrett and the neighboring homesteaders have been suffering from the bullying of local cattle rancher Rufus Ryker (Emile Myer), a man prone to hiring outsiders to do his dirty work.  On learning this, Shane offers himself as a hired hand to Starrett instead – from the look of it, he does so just to be all nice and heroic.

For most of the film, Shane either does odd jobs around the Starrett’s place or serves as the extra chaperone when Starrett or one of the other homesteaders need to head into town for supplies.  He’s also on hand as a bodyguard the couple times Ryker comes out to talk to Starrett to offer him a job in exchange for surrendering his land claim.  His six-shooter is left in the Starrett’s barn most of the time bundled up in a blanket roll (except when the starry-eyed Joey sneaks in to have a look at it covetously).  Shane seems to be intent on working as a farmhand and abandoning whatever mysterious lifestyle he’d had before this – but then the homesteaders learn that Ryker has hired Jack Wilson (Jack Palance), a notoriously mean gunfighter, to threaten the other homesteaders into abandoning their claim – and Shane realizes he has to act.

In all honesty, it’s the homesteaders that seemed to be more fleshed-out to me, particularly Joe Starrett.  He and the other homesteaders were a community of small farmers, brought together thanks to U.S. Government land grants, and had formed a sort of small town in the process with Joe Starrett as its unofficial mayor. Joe is the one who rallied the others for strategy meetings to counter Ryker’s latest attacks; he’s the one who gets the others to stop teasing hotheaded homesteader “Stonewall” about his pig; he’s the one to rally the others when Ryker’s tactics start persuading some farmers to pack up and leave. He’s the one trying to appeal to Ryker’s reason.  He’s the one encouraging the others to cut loose and have a July 4th day party on their own claims instead of going into town.

In short, Joe Starrett is kind of a bad-ass.  But Shane is the one who gets fawning hero worship from Joey, and even a few admiring glances from Joe’s wife Marian (Jean Arthur).  There’s some very faint stirrings of a potential love triangle midway through – but all that ever happens is Shane takes a turn dancing with Marian at the July 4th party as Joe watches with slightly narrowed eyes.  But Marian slips back over to Joe quickly thereafter, and save for a significant look and a handshake towards the end, she and Shane never touch again. 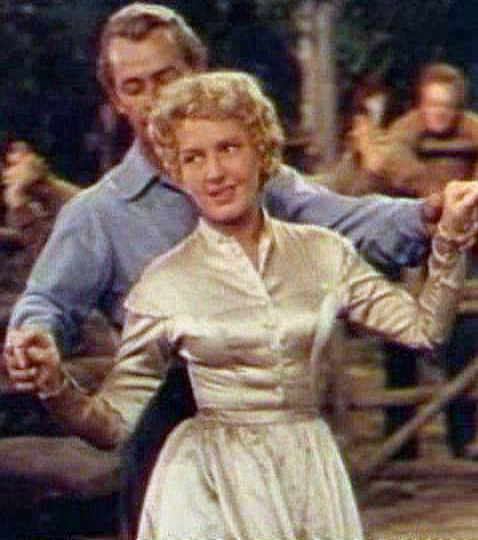 And that’s what ultimately frustrated me – I never knew why they were taken with him, because I didn’t learn enough about Shane.  Joey especially – he imprints on Shane like a baby duck and follows him around from the first time he lays eyes on the stranger, and I don’t know why.  Joey never even sees Shane shoot until three-quarters of the way through the film – but he is instantly smitten with the stranger, declaring that Shane would surely win in a fight with Pa and that Shane must be a great gunslinger and that Shane would never run away from a fight and that he loves Shane a little.  The first time he does see Shane in a fight – eating a peppermint stick and peering through the saloon doors, as Shane defends himself against Ryker’s men – Shane is actually on the verge of defeat when his father Joe comes to the rescue.  And yet Joey is all talk about Shane. 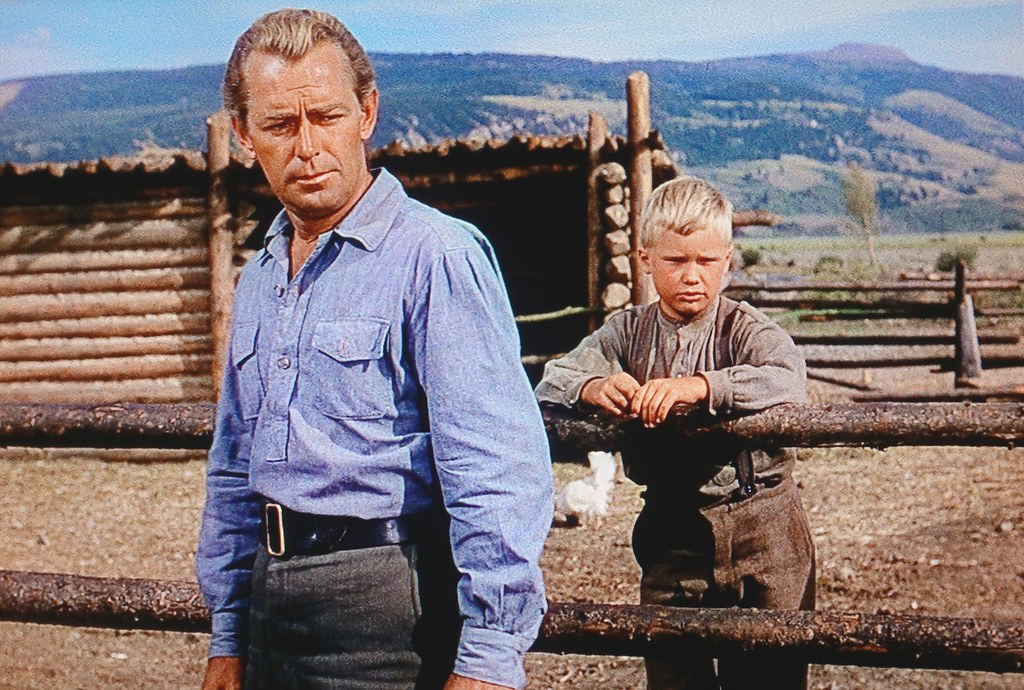 I don’t even need to know much, mind you.  There are some things that are clear – Shane is very good with a gun, and is very quick on the draw.  His offer to help the Starretts instead of Ryker speaks to a sympathy for the underdog.  His abandonment of his gun while he’s with the Starretts suggests that he’s trying to escape something.  But – that’s pretty general, you must admit.  We don’t know where he’s from, where he’s going, what he did before, what he’s hoping to do, why he is so determined to change his ways.  He’s just a sort of knight-errant – and we don’t need to know much about those.  But he’s not just a knight-errant – he’s the title character and Joey is instantly overawed by him, and I didn’t learn enough about him to warrant either.  Joe Starrett was drawing my attention mainly by virtue of doing more.

Then again, in his own review, Roger Ebert suggests that this may be because the story is largely told from Joey’s perspective, which may give Shane a bit more of a larger-than-life quality.  But even here I’d like to have seen Shane do more to earn that admiration.

I’d actually be curious to see another film about what happened after Shane left this little town, and the other homesteaders all got back to their regular lives.