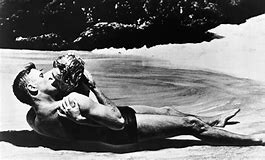 It can be really surprising just how odd the spread of pop-culture memes can be, and how they can affect audiences in unexpected ways.  The most unlikely detail from a play or a TV show can take on an independent life of its own, and stray far from its source and find a foothold with an entirely separate audience, which may know scant little, if anything, about the original material.  Like the time I recognized the St. Crispin’s Day Speech from  Henry V as “oh hey there’s a line from this in that episode of  Northern Exposure.”

I had a similarly unlikely exposure to the classic beach scene from this film as a child.  Forty-odd yeas ago, I had a copy of one of the Mad magazine paperbacks, one originally published in 1959, and a clip-art copy of the famous Burt Lancaster/Deborah Kerr clinch kept inexplicably turning up in the backgrounds in one of the strips as a running gag, eventually replaced by a line drawing of a pair of embracing skeletons echoing their pose.  I didn’t really “get” that reference at the time, but seeing it over and over reinforced that couple for me, to the point that when I finally saw this film I was expecting it to be all about them. And that’s why I was confused when Montgomery Clift showed up and much of the first couple scenes focused on him instead. Oh, Lancaster has a big role alright – as Sgt. Milton Warden, second-in-command of a platoon of soldiers stationed on the island of Oahu. He’s initially gruff to Clift’s “Robert E. Lee Pruit”, a new transfer from the mainland – but it becomes quickly clear that Warden is more by-the-book meticulous than he is cruel.

No, for cruel you want the commanding officer Captain Holmes, who’s eager to get Pruitt on board with his regimental boxing team as he’s heard Pruitt is an especially good middleweight.  But Pruitt says he’s retired from boxing, leading Holmes and many of the men to put Pruitt through a grueling hazing campaign they call “The Treatment” in an effort to change his mind.  Pruitt knows what they’re doing, though, and stands his ground.

Pruitt does have one or two sympathizers, though.  Frank Sinatra’s “Angelo Maggio” is one – a feisty, yet good-natured, tough kid from Central Casting’s Little Italy.  Maggio is a fan of Pruitt’s boxing, but respects his retirement – so he tries to cheer Pruitt up with excursions to his favorite off-base hangout, a club with several taxi-dancers on the staff.  Maggio just loves hanging out with any of the women, but Pruitt is quickly drawn to Lorene (Donna Reed), a woman from small-town Oregon who’s just trying to make enough money to get the hell back to the mainland and marry someone respectable.  At first Pruitt is just a regular customer, but his brooding stubbornness starts her wondering if he can be cleaned up a bit and turned into marriage material.

Warden also comes to befriend Pruitt, and look out for him where he can – that is, when Warden isn’t distracted by Mrs. Holmes (Deborah Kerr), his commanding officer’s lonely wife.  Rumors of Karen Holmes’ philandering are rampant on the base, but Warden knows that Captain Holmes is just as bad, if not worse, in the fidelity department.  Warden pays the Holmes house a chance visit on a night when he knows full well that Captain Holmes won’t be in, and he and Karen start an affair.

On paper, this sounds terribly soapy.  Most of the film deals with these little romances – Warden and Karen Holmes struggling with their secret romance, and Pruitt struggling to cope with “The Treatment” and seeking solace with Lorene. Maggio has his own struggles too – clashing with a boorish Sergeant in charge of the stockade (Ernest Borgnine) who exacts his revenge when Maggio finally acts up and gets a six-month sentence.  But everyone’s performance is refreshingly natural, and the script is actually nuanced enough that I still bought it all.  About midway through there’s a scene where Pruitt and Warden run into each other, both of them on raging benders, and bond over their respective misfortunes; it’s some of the best drunk acting I’ve ever seen, and is probably my favorite scene in the whole film.

My least-favorite bits, though, come towards the end.  For this all happens on a U.S. Army station on Oahu in 1941.  It’s no surprise, then, that Pearl Harbor is going to enter into things – but the way they set it up is so clunky and blatant it honestly felt tacked-on.  Warden makes a late-night phone call just before the Pearl Harbor scenes, and for much of the call he stands next to a wall calendar with the date “December 6, 1941” very prominently on display.  He later has an early morning meeting on the beach with Karen – and as they speak, they pass a street sign, which the camera lingers on just long enough for us to read its message of “Pearl Harbor 8 miles” as Kerr and Lancaster walk off screen.

It’s possible some of the “soap-opera” feel comes from its origins. The film was based on a semi-autobiographical book by former soldier James Jones, and a lot of the sturm und drang is lifted directly from it. Both the Hays Code and the Army made some edits, toning down some of Jones’ original story – but not that much, miraculously.  Ernest Borgnine’s “Sergeant Judson” is largely as mean as he is in the novel; all the Army asked is that he be presented as a lone bad apple.  The Hays Code also turned down some of the sex – there are a couple scenes in the book of soldiers turning tricks for extra money, and those aren’t in the movie – but the frothy affairs are still there.  Even Lorene isn’t scrubbed up too much, and while everyone reaches unhappy ends, the women end up in a more or less sympathetic place.  It was pleasantly surprising.

The whole thing was a pleasant surprise, in fact, and a far cry from what Mad Magazine had me think it was about.