Those of you who have parents in dicey health may want to take a rain check on watching this one.

This particular Tokyo Story is a profoundly simple one. Shūkichi and Tomi Hirayama (played by Chishū Ryū and Chieko Higashiyama) are the elderly parents to five grown children; daughter Kyōko (Kyōko Kagawa) is a teacher in the local school and lives with them, and one son died in the war, while the other three now live in and around Tokyo. The Hirayamas pay their Tokyo kids a visit, staying first with their doctor son Kōichi (So Yamamura) and his family, then with their eldest daughter Shige (Haruko Sugimura), who co-owns a beauty parlor with her husband.  Daughter-in-law Noriko (Setsuko Hara), their deceased son’s widow, visits with them as well.

But it’s not a cuddly family reunion. Kōichi struggles to find time between his appointments to hang out with his parents, and Shige secretly resents feeling like a baby-sitter, while Noriko has an office job without much time off.  So the kids struggle to find ways to entertain Shūkichi and Tomi – often leaving the pair to just sit around inside all day – and at one point up and sends their parents to a tony spa, just to get them out of everyone’s hair. But the spa isn’t quite to Shūkichi and Tomi’s taste, so they decide to cut their trip short and head home. Tomi is starting to feel a little sick, anyway – hopefully it’s nothing serious…

I confess that it took me a while to get used to director Yasujirō Ozu’s style. Shūkichi and Tomi come across as almost bland for most of the film – smiling placidly, agreeing pleasantly with everything.  When Shige sends them off to the spa – even though it’s glaringly obvious she’s just trying to get rid of them – Tomi just smiles and says that she’s never been to a spa and that it sounds lovely.  I was initially repelled by their meekness, and how mundane and placid Ozu’s style was overall; lots of static shots of simple things like laundry, Kōichi ‘s wife making up a room for the parents, Shige having a little squabble with Noriko over who can take on babysitting.  It didn’t seem to be going anywhere, really. 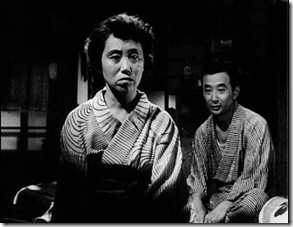 But towards the end, when Ozu lets us see some of the cracks, those façades felt very different.  At one point, Shūkichi and Tomi discuss how much their children have changed and how little they seem to need their parents – all the while with those same bland, placid smiles.  Tomi has that same placid smile in one scene when she cheerfully admits during a family dinner that Shūkichi used to drink a lot back in the day.  And again, when she ends up staying the night at Noriko’s and confesses that she thinks that Noriko is doing better by her than her own children. Shūkichi gets a little more of a chance to let loose – one night in Tokyo, he meets up with two old friends for a guy’s night out, getting blisteringly drunk and complaining about how rotten their kids are.  In the morning, he’s back to the pleasantly bland façade.

This wasn’t genuine blandness, I realized – this was a couple who had been let down and hurt too much, and the only way they could stay positive was to lower their expectations and be happy with whatever they got.  And that suddenly seemed unspeakably cruel.  Especially when Shige was in the picture – she’d struck me as pretty abrasive and selfish throughout, especially towards the end, when she was all but pushing her parents out.  But even when someone finally speaks up about Shige, the script excuses it away; Kyōko has cause to complain about Shige to Noriko at one point, and Noriko smooths her ruffled feathers saying that grown children with their own lives have a hard time getting away and making time for family, and that’s just the way life is.

It was a sobering note to end on; especially now, and I called my parents afterward (they are both safe and healthy and sheltering in place, thankyouverymuch) to catch up.