So this is going to sound like a serious melodrama, with a male lead antihero who’s trying to make a ton of excuses for his misdoings.  But…somehow it didn’t come across that way.

We first meet Harry Graham (Edmond O’Brien), a traveling salesman as he and his wife Eve (Joan Fontaine) are consulting with an adoption agency near their home in San Francisco.  Their agent Mr. Jordan (Edmund Gwenn) assures them that they seem like suitable parents, but the Grahams will just have to go through the usual application process – a home visit, background investigations, and the like.  Mr. Jordan notices Harry seems slightly concerned at this, but holds his tongue for now.  During a routine visit Mr. Jordan pays to the Graham’s apartment, Harry seems even more on edge, snapping at Mr. Jordan for being nosy.  He apologizes almost instantly, though, chalking it up to being distracted by a sales trip to Los Angeles; he’s only leaving just that night, and hasn’t packed yet, so he’s a little stressed.  Mr. Jordan relents – but something still doesn’t seem right. So Mr. Jordan sneaks down to Los Angeles, calls around to the hotels looking for Harry, and finally learns that Harry has a second home there in L.A.  He makes a surprise house call there – and finds Harry with a baby boy, and a different woman he also refers to as “Mrs. Graham.”  Well then. Harry begs Mr. Jordan to hear his side of the story, and let him explain how he got caught up in this situation…

The bulk of the film is Harry’s story, told in flashback. He and Eve had been going through a rough patch a year prior, after Eve discovered her infertility.  She’d thrown herself into a career with Harry’s company, and Harry was feeling a little neglected when he met Phyllis (Ida Lupino), a sassy waitress, during a business trip to Los Angeles.  They had a friendly but platonic dinner date, and Harry was inspired to look her up again during his future Los Angeles trips. Gradually things heated up into an affair, and before long Phyllis was pregnant.  Harry’d already made up his mind to divorce Eve and marry Phyllis, except before he could tell Eve, she had to rush home to care for her dying father, and he couldn’t bear to do it.  And then Eve said she wants to adopt a child, and Harry realized he’d need to be in Eve’s life during the application process.  …But in the meantime his baby with Phyllis was due any day now.  So, he tells Mr. Jordan finally, he did the only thing he could do. 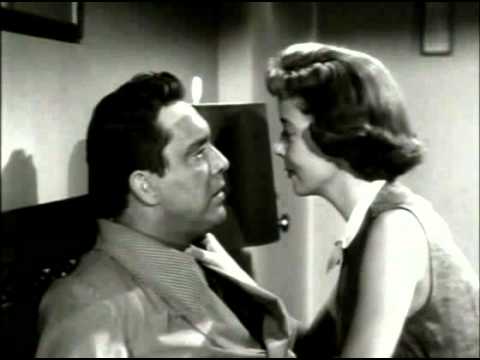 ….Now, let’s step back a minute.  The main thrust of Harry’s defense is that he simply couldn’t bear to hurt either of these women by breaking things off with them.  He knew that what he did was wrong, but gosh darn it, he simply had no choice – he loved the both of them too much.  There is not a woman alive that would buy that excuse, and in most other movies, things would end with Eve and Phyllis finding out about each other, and either getting into a huge fight with each other, or they’d team up and kick Harry from one end of California to the other before suing him blind.

But somehow that doesn’t happen.  Somehow Harry seems…sympathetic.  Weak and afraid of confrontation, yeah, but sympathetic; O’Brien plays Harry as someone overwhelmed by the situation, and a little bit self-delusional about how much of the situation is really his fault.  Harry had plenty of chances to come clean to either Eve or Phyllis, but was too afraid to do so, and has been unwilling to face that his own fear put him where he is. He’s still a tool, but…O’Brien inspires us to pity Harry instead of condemning him.

Eve and Phyllis are also both intriguing roles.  Eve could have been portrayed as a brittle and cold martinet, but Fontaine gives her a sort of friendly warmth that speaks to the length of her marriage to Harry.  After his first dinner with Phyllis, a lonely Harry calls Eve, and teases her about how he “cheated on her” with someone else.  Instead of being scandalized, Eve just teases him back and changes the subject.  She’s not the shrill, fragile first wife – she’s confident and smart.  Lupino as Phyllis is similarly smart, and even more independent in a way – throughout their affair, she insists she doesn’t want anything from Harry and they’re just having fun.  Even after he discovers she’s pregnant she tries to talk him out of marrying her.  But she’s genuinely fallen in love with Harry, and is just as surprised about that as he is.  And as for the moment when Eve and Phyllis finally meet – which they do, very briefly – there’s no fight, there’s no anger or accusation or acrimony.  The two women simply give each other a sad smile of mutual understanding, and each goes on her way. Part of what may have made the women in this film so striking is the director – Lupino herself.  Ida Lupino had a somewhat bumpy career after her turn in High Sierra with Humphrey Bogart; she felt the scripts she was getting were boring, and turned down a lot of offers.  When she was on set, she’d often get bored sitting in her trailer and go watch the editors and directors at work; eventually she decided to give directing her own go. This was actually her seventh film, and the first for which she received attention for directing herself (she’d done some uncredited direction work on one of her earlier films).  I can’t help but think that Lupino being in the director’s seat lead to a more rounded and realistic look at the women in the film.  Harry doesn’t come out looking that great, but…even here, it’s actually sort of understandable, and you find yourself sympathizing with Graham just a little bit.