When I reviewed Rene Clair’s A Nous, La Liberte!, I said it was somewhat hard to categorize; it was neither one thing nor another on a number of fronts. M. Hulot’s Holiday is another French work that seems to be similarly tough to categorize.  Fortunately I am similarly charmed.

The story is exactly as promised in the title; it deals with the goings-on when one Monsieur Hulot (Jacques Tati, also the director and screenwriter) travels to a small beachside town for a vacation. He tries making friends with the other guests in the hotel, he dabbles in fishing and horseback riding, he tries tennis lessons, he flirts with another guest at a costume party, he tries to join a couple of other organized events but things go wonky and he has to drop out, and when the vacation is over he goes home.  That’s it.

But that’s kind of everything.  Most of the humor and focus of the film deals with little situational things that you’re more likely to notice when you’re on vacation, and thrown in with a bunch of strangers.  Like with any such resort, Hulot’s fellow guests are a mixed bag of people –  a weird couple who always walks with the husband trailing ten feet behind his wife, a retired general who always talks the ear off anyone who asks him about his career, or a wild-haired student who persistently misquotes Marx, or the Englishwoman who’s obsessed with tennis.  Everyone there has the luxury of free time; they can pursue little pet interests or hobbies, they can get into little cliques, they can get annoyed by little silly things, they can get caught up in quirky little adventures. It’s total Andy-Rooney-Jerry-Seinfeld “didja ever notice….” kind of material, the little things we all usually overlook but which are completely universal and understandable.

Tati’s take on these little moments is part of what ultimately makes his Hulot character so memorable, despite his taking up a comparatively small amount of screen time.  Hulot is a little unremarkable on the face of it – a somewhat nondescript and slightly clumsy middle-aged man, taller than average, with simple tastes.  He’s gently pleased when things work out, like when someone teaches him a completely nonsensical tennis serve that still helps him beat the pants off three challengers, and embarrassed when they don’t – like when he tries mounting a horse but his steed breaks free and causes havoc with a parked car.  When things really get screwed up he just runs away.  It’s very ordinary, but all the more relatable for its ordinariness.  We don’t really learn much else about M. Hulot – or any of the other characters for that matter.  They’re just flitting in and out of scenes, bumbling along and doing things.

In Hulot’s case we learn even less, since he rarely speaks.  Jacques Tati got his start as a mime, and so most of the gags in M. Hulot’s Holiday are tightly-choreographed sight gags – M. Hulot getting his shoes stuck on a rug, the barely-glimpsed chaos as he tries to mount a horse, his stepping on a rope in just the right way so that it stretches too taut and snaps back, flinging him into the harbor.  Tati’s physical timing is superb. 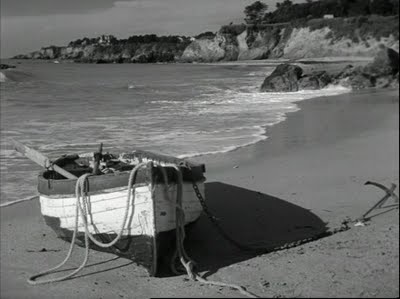 His director’s eye is just as superb. I was especially struck by the very opening scene – a calm shot of the beach just before Hulot and his fellow vacationers arrive, a boat docked in the foreground, waves quietly and gently lapping the shore.  After a quiet few seconds of this scene, we smash-cut to a jam-packed train station, travelers all rushing from platform to platform trying to make their connections.  Most of the film takes place in that little seaside town, though; the town of Saint-Marc-sur-Mer, which Tati had himself discovered on his own vacation several years previously.

The British comedian Rowan Atkinson has pointed to this as one of the inspirations for his own character Mr. Bean. I’ve not really been much of a Mr. Bean fan; but Monsieur Hulot charmed me quite a bit.