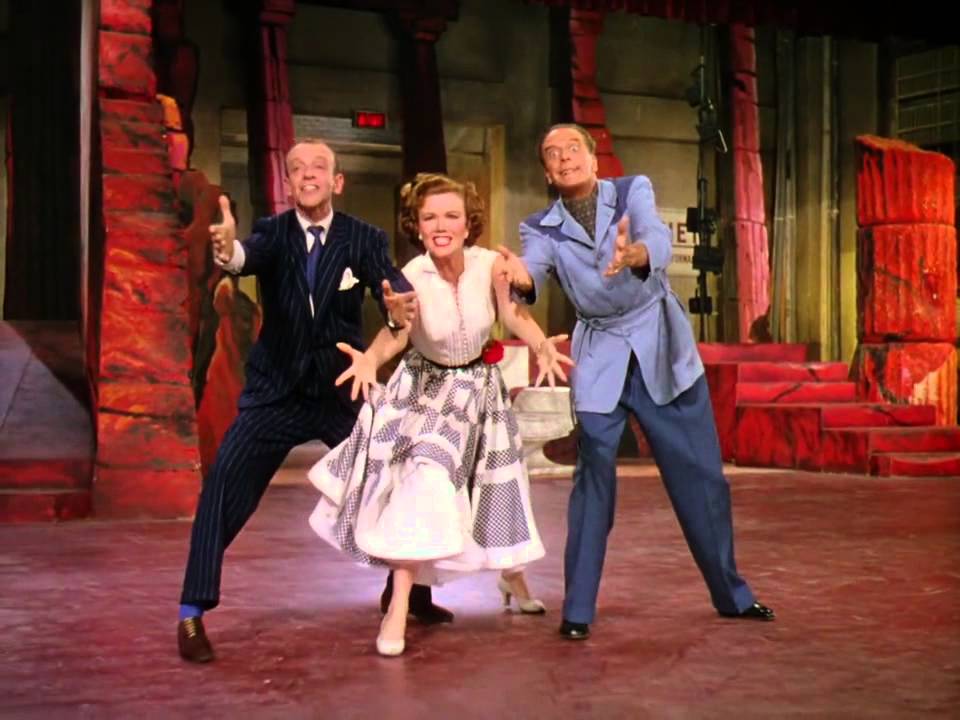 I think I have proven by now that I’m not the biggest fan of musicals, so just…something to bear in mind, because otherwise I’m going to come across as a big ol’ cynic.  Again.  Because The Band Wagon is another movie musical where the individual pieces outweigh a paper-thin supporting “plot”, and I wish the whole thing had just been a revue instead.

In this case the “plot” is about a formerly-famous Hollywood singer/dancer, Tony Hunter (Fred Astaire), and creation of the Broadway musical that’s meant to be his comeback.  He’s been out of the limelight for a while now, and has decamped to the stage to try his luck with the musical his old friends Lester and Lily (Oscar Levant and Nanette Fabray) have just written, just for him. They assure Tony that they’ve found a fabulous up-and-coming director to be in charge, and are courting prima ballerina Gabrielle Gerard (Cyd Charisse) to be his co-star. 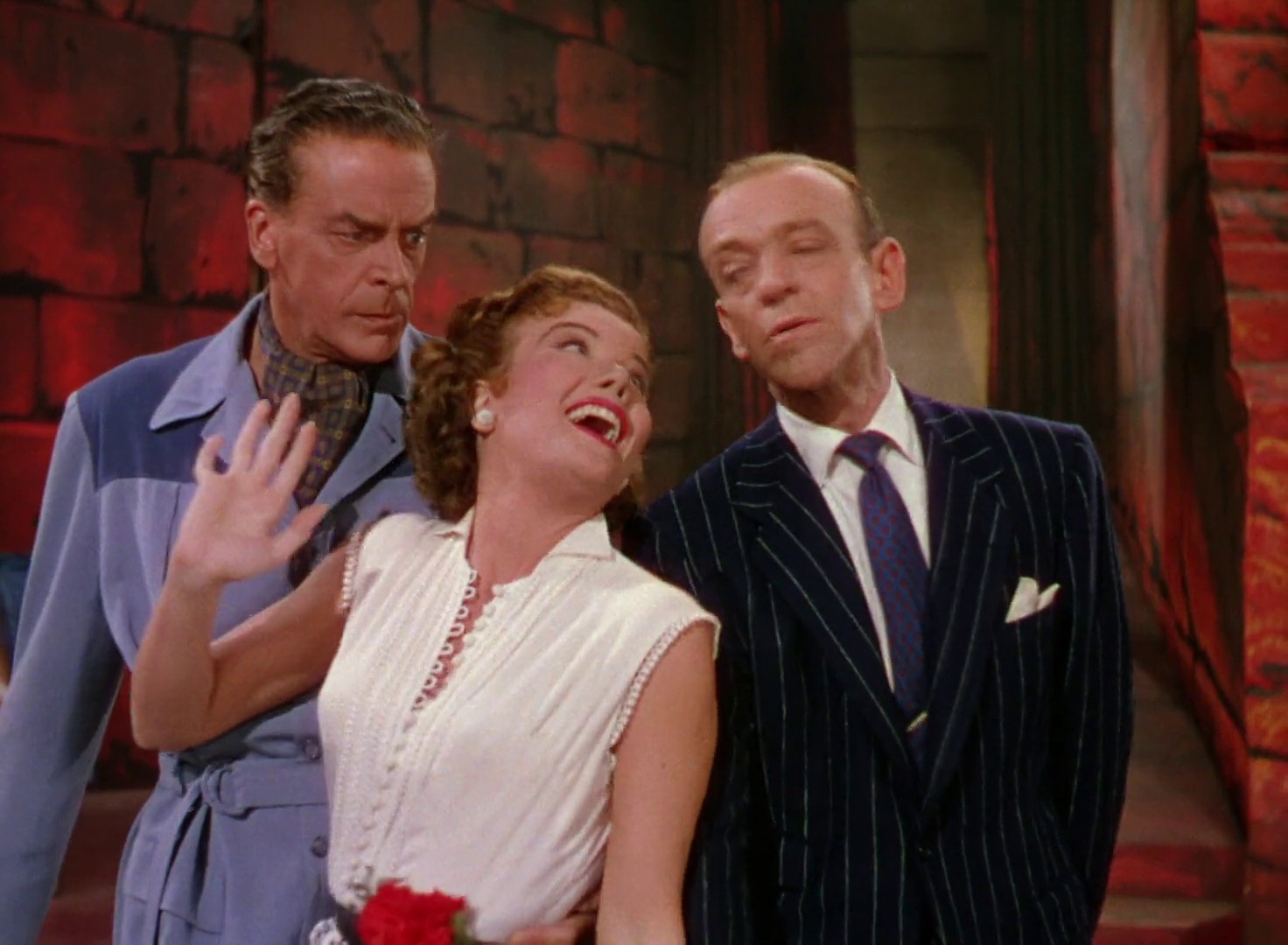 Tony’s excited at first – their play sounds like a fun idea, with Tony playing a children’s book author who secretly writes lurid crime novels on the side.  However, the director Jeffrey Cordova (Jack Buchanan) is a pretentious fop who’s convinced the story is a modern retelling of Faust, and Gabrielle and Tony can’t stand each other when they meet.  The rehearsals are long and grueling, Lester and Lily keep changing the script, Jeffrey’s adding over-elaborate special effects, and the first out-of-town tryout is a complete flop.  But that evening, as the cast is gathered in the hotel to drown their sorrows with a party, they have such fun with their clowning around that it inspires Tony to effectively take over as director, revamp the show, and try again. 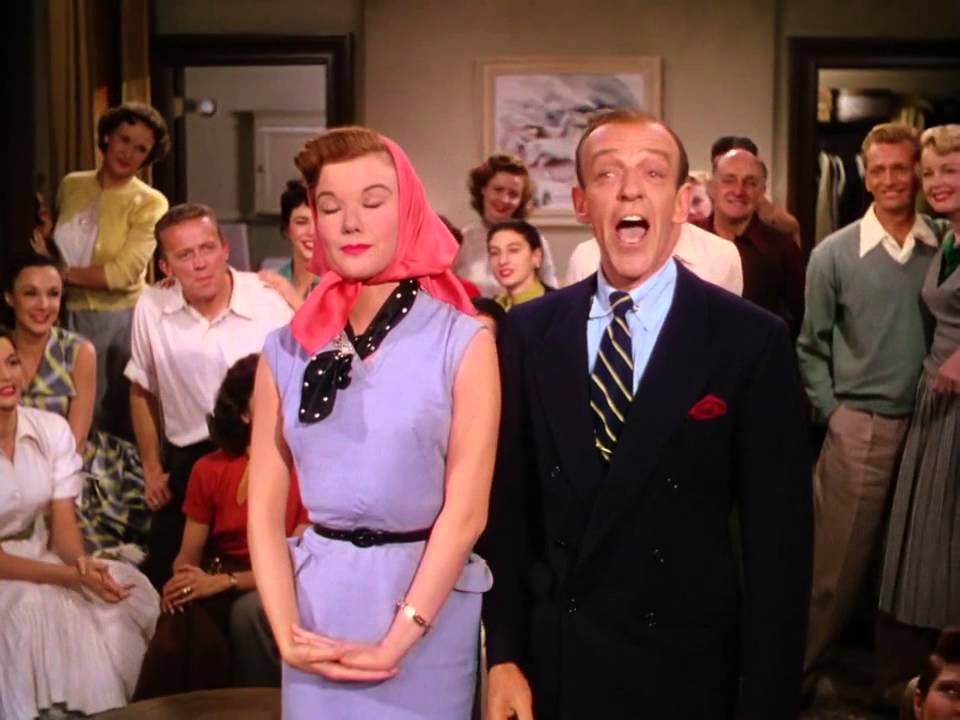 Roommate Russ came home a few minutes after I started, and asked what it was about; I described it as “A sort of cross of The Producers and Singin’ In The Rain.”  As the show went on, I added “the Stonehenge scene from This Is Spinal Tap” into the mix as well.  It was a fairly predictable plot – of course Tony and Gabrielle were going to get over their antagonism, of course the scrappy little band of performers were going to end up with a success in the end, of course Jeffery Cordova’s vision was going to trip everything up and he was going to get his comeuppance.

And that’s what frustrated me most – because there were individual moments that were so much better than the script they were in.  Some of the backstage-chaos bits were quite fun – there’s a scene from a chaotic rehearsal where Gabrielle is struggling to sing while they test out some overly-elaborate special effects.  The backstage camaraderie of the regular chorus dancers also gave me flashbacks to my off-off-Broadway days as well; and I learned that this film was the source of one of my favorite movie quotes ever, which I’d heard out of context (Lester is trying to dodge people who are looking for him, and snarls at the person sent to fetch him, “tell them I’ve gone to Tahiti to paint!”). Another scene sees Tony and Gabrielle try to clear the air with a visit to Central Park, and spontaneously dance to a nightclub band playing “Dancing In The Dark”.  It’s evocative of Astaire and Rogers’ work, and it’s proof that Astaire has definitely Still Got It.  There’s a goofy little fake-German number the cast does to blow off steam at their cast party, “I Love Luisa”, that just oozed fun; and a lengthy sequence from the purported musical with Tony dancing his way through a ballet inspired by Mickey-Spillane crime novels was a similar delight.  As was a soft-shoe duet with Jeffrey. 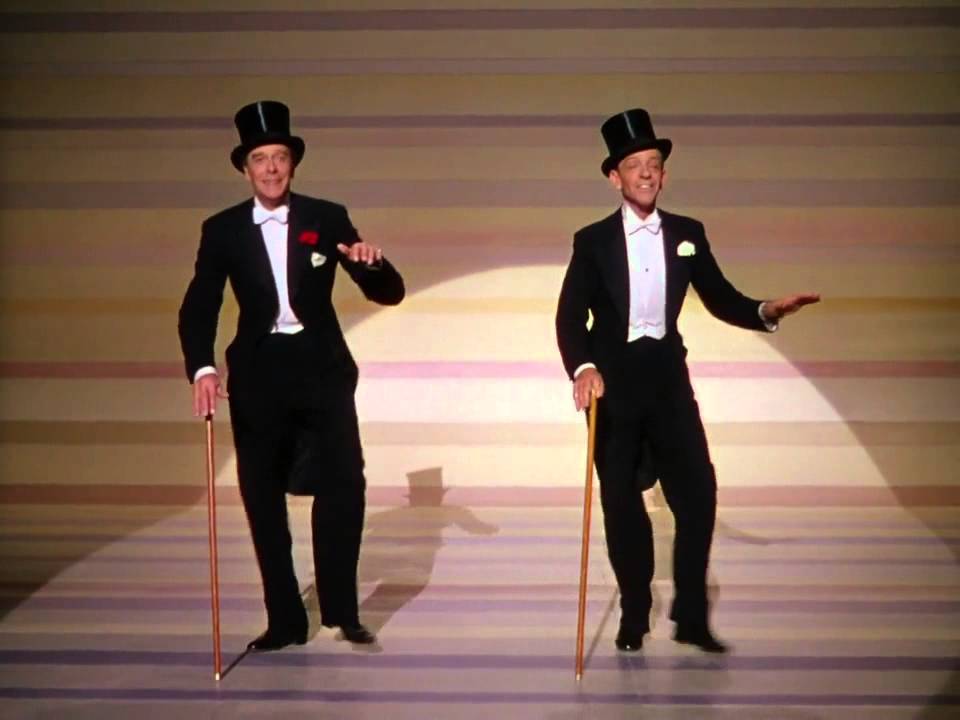 However, as delightful as it was, the soft-shoe with Jeffrey underscores the biggest problem I had with the ultimate show-within-a-show.  Even though we’ve expressly heard that this is a show about an author, and even though the whole story of the film is driven by Jeffrey mis-representing the original plot and Tony’s reclamation of that plot, many of the numbers we see seem to have nothing to do with such a plot, like the soft-shoe duet.  Or Fabray leading a chorus in a down-home ode to hayrides.  Or a bizarre bit with Astaire, Fabray, and Buchanan dressed up as bonneted babies in high chairs singing about how they hate each other.

Here’s the thing – I’ve got no objection to numbers like that as such.  I grew up with The Muppet Show and Hee Haw and The Carol Burnett Show as a regular part of my TV diet, so I’m used to the whole revue format.  It’s when you try to shove that revue format into a plot which it doesn’t support that I get cranky.  If you want the show-in-a-show to be about a crime novelist, then you’d better give me a good explanation for how….this fits into that. I also had the feeling once or twice that Astaire was almost trying a little too hard. Some of the schtick felt a little too schticky, the comedy a little too broad, for the refined, suave Astaire I’d seen before. One of his early numbers, where he cavorts through a strangely sanitized Times Square, almost felt like he was trying to emulate Gene Kelly.  He did fine and all, but…the “Dancing In The Dark” sequence and the Spillane-inspired dance felt much more like he was himself, and were all the more enjoyable. Whether or not Astaire maybe felt a little like Tony at this point in his career, I couldn’t say.  But when he was dancing like himself, he proved he needn’t have worried.