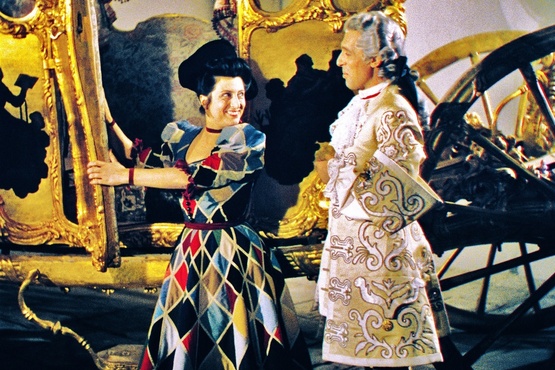 My apologies first for a couple things – I tried to do a liveblogging of the Oscars, but I was having some extreme technical difficulties and had to scrap that. I am both surprised and delighted that Parasite won Best Picture – I’m so used to the Academy going for a “safe” picture that this was a complete shock.  (Roommate Russ has a friend who’s tied into the Korean food scene, and celebrated the win by purchasing about a weeks’ worth of the makings of ram-don.)

I also have been contending with both yet another job change and the preparations for a trip, so I’ve also dragged my feet on writing up this review for Renoir’s The Golden Coach.  Apologies for that delay, and for what may be another period of sparse reviews next week; I’ll be traveling, but may try to get something up while i’m roaming the world.  Things should get a bit more back to normal in early March.

Speaking of travel, though – the main characters of this film are a traveling troupe of actors (how’s that for a segue?….), an Italian troupe of commedia dell’arte actors come to try their luck in 18th Century Peru.  The innkeeper who’s sponsoring them is not the most honest sort – the theater he promised them is in disrepair and is actually being used to house the town’s goats – but the troupe is desperate, and digs in for an extended stay, all pitching in to clean up the theater before proceeding.

But they have an idea. In the cargo hold of the ship they used for their passage was a magnificent golden coach, meant for the Viceroy of the city where they were bound (Duncan Lamont). Everyone in the troupe had their eye on it; one of the cast members, Camila (Anna Magnani), even slept in it, preferring its opulence to her spartan cabin.  Surely this suggested the Viceroy where they were bound was a man of means, and if they won his approval it might help their cause. The troupe tries to win the viceroy’s endorsement early on, as well as the endorsement of bullfighter Ramon (Riccardo Rioli), a locally-admired hero.  Both Ramon and the Viceroy seem to take a great shine to the troupe, making frequent visits to their performances – but quickly it becomes clear that they’re more entranced with Camilla herself.  The Viceroy even promises to give Camilla the Golden Coach as a token of affection. However, Camilla already has a boyfriend, Felipe (Paul Campbell), a soldier who’s been traveling with the group and serving as a bodyguard. But – Felipe’s broke at the moment, and Camilla starts to reconsider… 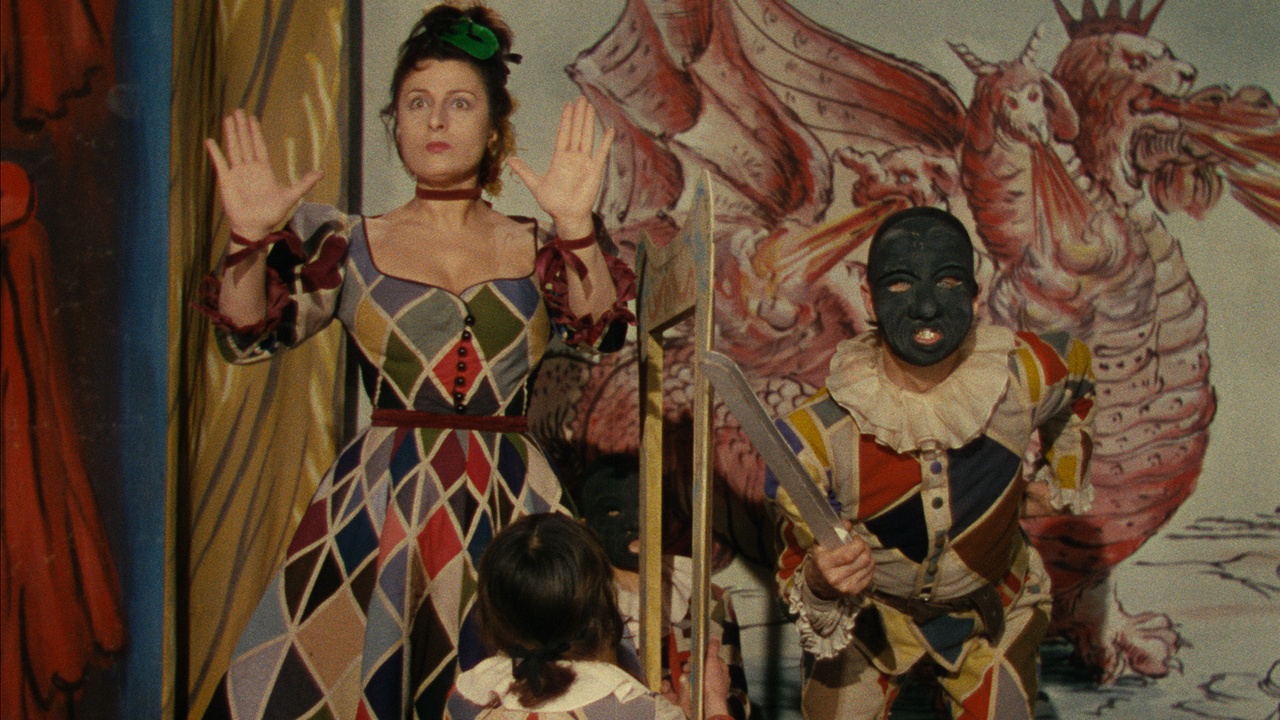 I have a soft spot for commedia, thanks to working with a director  back in the day who was himself fond of the genre.  Commedia was a sort of early improv comedy popular in Renaissance Europe, with a set of stock characters getting swapped in and out of various scenarios or sketch ideas. Actors in a commedia troupe would each specialize in a certain kind of character type – the villain, the foppish dandy, the pompous judge, the clever servant – and instead of memorizing lines and doing completely-scripted plays, they’d instead memorize plots and sketches and scenarios, improvising the actual dialogue anew each night.  It’s a theatrical form that went on to influence not only improv comedy, but vaudeville and other scripted farce (when I described commedia to Roommate Russ, he said “that sounds kind of like the Marx Brothers,” and he’s absolutely right).

So I was already on board with this when I saw that we’d be working with commedia.  Happily, as well, the business of the film includes some bits that would have absolutely worked in a commedia performance – like a sequence when the Viceroy is trying to keep Camilla and his previous girlfriend in separate rooms in his mansion, while simultaneously trying to meet with his advisers and is frantically running from room to room conducting damage control.  Two similar sequences see Felipe, Ramon, and the Viceroy all come to pay a visit to Camilla, each one narrowly missing the others as they wander room-to-room in search of the unaware Camilla.

But what really caught my attention was Camilla the character. Magnani has the film’s standout performance – she’s acting rings around the others – but that’s only part of what drew me in. The character Camilla holds in the troupe is “Columbina”, a character who’s usually the spunky servant girl.  Columbina is usually depicted as being clever, witty, and practical – the saucy best friend to the romantic lead, the one who usually sees the truth of the tangled situation and is able to call bullshit out for what it is.  In the unfolding story of The Golden Coach, Camilla starts out true to a Columbina herself; when the Viceroy gushes to her that he admires the freedom that her poverty gives her, she retorts that “you wouldn’t be saying that if you were ever really poor.”  But as the competing romantic entanglements surround her, Camilla starts to lose that sense of discretion, and starts making some fairly foolish choices, causing more and more problems for herself and others – just like what happens to the lovers in a commedia.

The company’s leader enigmatically advises her a couple times that as an actress, she is only “really herself” when she is on stage.  Indeed, as the Columbina, Camilla is more assured, more certain of what she wants; the more the “real life” of the film starts to resemble a commedia, the more Camilla loses Columbina’s sense of discernment, but when she steps on stage she knows exactly what she’s supposed to do.  It’s an intriguing meta-commentary on the plot that I didn’t really see in full until the very last moments of the film – and didn’t completely get for another couple days still.