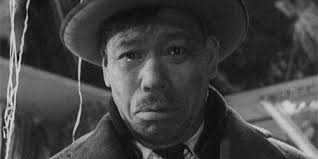 Early on in Akira Kurosawa’s Ikiru, there’s a scene familiar to those who’ve tried to deal with bureaucracy – a group of women from a poor Tokyo neighborhood have come to city hall to get a cesspool cleaned up and turned into a playground.  But the men they speak to keep sending them on to different departments – first public affairs sends them to public works, then they get sent to the sanitation office, then public sanitation, then pest control, then the parks department, then the parks infrastructure department, then back to public affairs again, where the frustrated women finally give up in frustration at the bureaucrats mindlessly paying hot-potato with their request.  Our story, however, is about one such bureaucrat, and how he tries to snap out of that state – and why.

Kanji Watanabe (Takashi Shimura) is a career civil servant with stomach cancer.  That’s not a spoiler; the film opens with a shot of his x-ray, and a narrator intoning that he’ll likely be dead within a year – but adds that really, he’s kind of dead already.  He had a little more spunk early in his career, when he and his wife were a happy couple with a young son, but his wife died early, and Mr. Watanabe threw himself into his work, doing whatever it took to keep his job going – and what has kept his job going for 30 years is simply pushing papers, stamping each one carefully to confirm that he’s received it before passing it on. 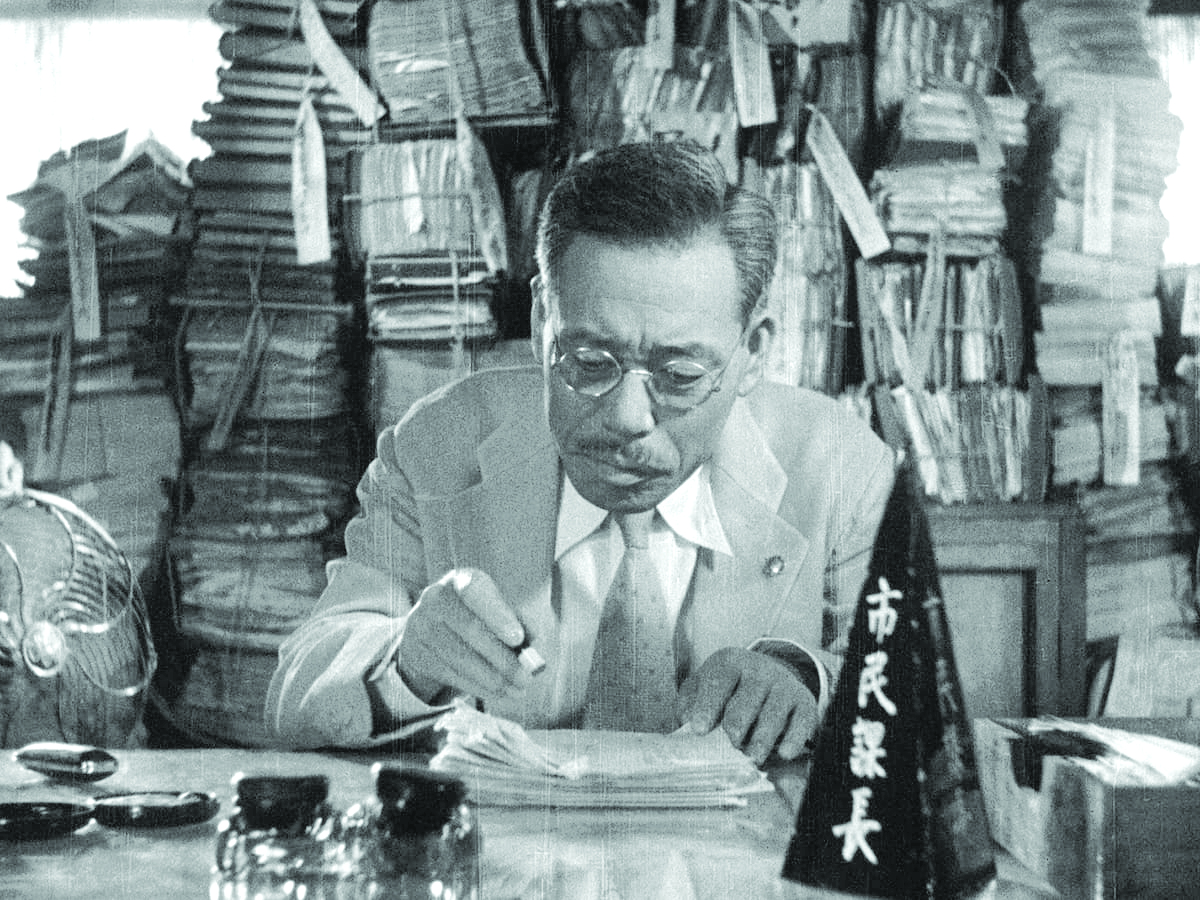 The shock of discovering his cancer wakes him up to the realization that he hasn’t had that much of a life.  He never remarried; he still lives with his grown son and daughter-in-law, but they think he’s a boring fogey and don’t really talk to him; he just goes to work and goes home, and doesn’t really do anything else.  Immediately after hearing his diagnosis, he goes on an all-night bender, egged on by a broke writer he meets in a bar one night, and then starts hanging out with Toyo (Miki Odagiri), a pretty clerk from his office.  That is, Toyo was in his office – she’s decided to quit because the job is boring as hell, and comes to his house to get his signature on her resignation form. But she’s spunky and lively and cute, and Watanabe clings to her joie de vivre, taking her out to cafes and amusement parks and pachinko parlors and basically showing her a fun time so he can live vicariously.  Toyo loves the attention at first, but grows uneasy at his devotion.  She has a new job, after all, and he has his old job at the office still.  Why is he spending so much time with her?  Isn’t there anything else he could be doing? 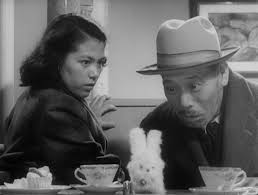 Yes, Watanabe realizes, there is. He does still have his job, and there must be something he could do with it – one last thing he can do so he can say he accomplished something in his life.  In fact, didn’t some women stop by who needed help getting a playground built?….

So, if this were a more conventional Hollywood film, the final act of the movie would be a montage of Watanabe storming through the various offices at city hall, going to greater and greater lengths to argue more and more passionately in favor of the park, all while getting weaker and weaker, with the final few scenes pairing the park’s construction with his final hospitalization.  But Kurosawa does something a little more different – and more poignant.  We do get scenes of Watanabe doggedly pursuing the park’s construction, but they come as flashbacks, stories told by the guests at Watanabe’s wake.  The park’s been built, the various bureaucrats have congratulated themselves for it – but the locals, for some reason, keep giving Watanabe all the credit.  Watanabe was acting really obsessive about this park, his colleagues all say – that’s even the spot where he died, slumped over in one of the swings.  What was up with that? 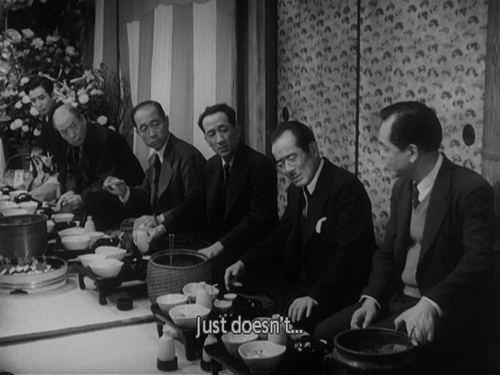 Only through their conversation do they finally realize – along with us – just how committed Watanabe was to this final legacy, and how he was using it to come to terms with his own mortality.  Drunkenly, they all resolve to do better, to devote themselves to the public just as Watanabe did.  Whether they’ll keep those drunken promises the next day at work, well….that’s anyone’s guess.

So, this is a hell of a film to watch when you’re in the throes of a job hunt, like me, and you’re having something of a middle-aged reckoning (at this writing, I am about a month away from my 50th birthday).  I knew the basic plot, but that wake-scene curveball towards the end lead to some profound thoughts – Mr. Watanabe’s impact might not have been recognized by everyone.  Other people took the credit for his work, and most didn’t know or understand what he was up to.  His cancer diagnosis was a mystery to everyone until after his death, so his motivations were completely misinterpreted.  But he didn’t care – he was doing it to satisfy himself  with the accomplishment.  An iconic clip reveals exactly what Watanabe was doing in that swing just before he died – he was swinging in it, singing a song about the brevity of life, and looking radiantly content.  Even if someone else claims the credit – and even if time completely erases any memory of how the park got there anyway – it’s there, and it’s there because he did something to better the world while he was alive in it.  That’s the point, I learned, and its something I’m thinking about deeply. 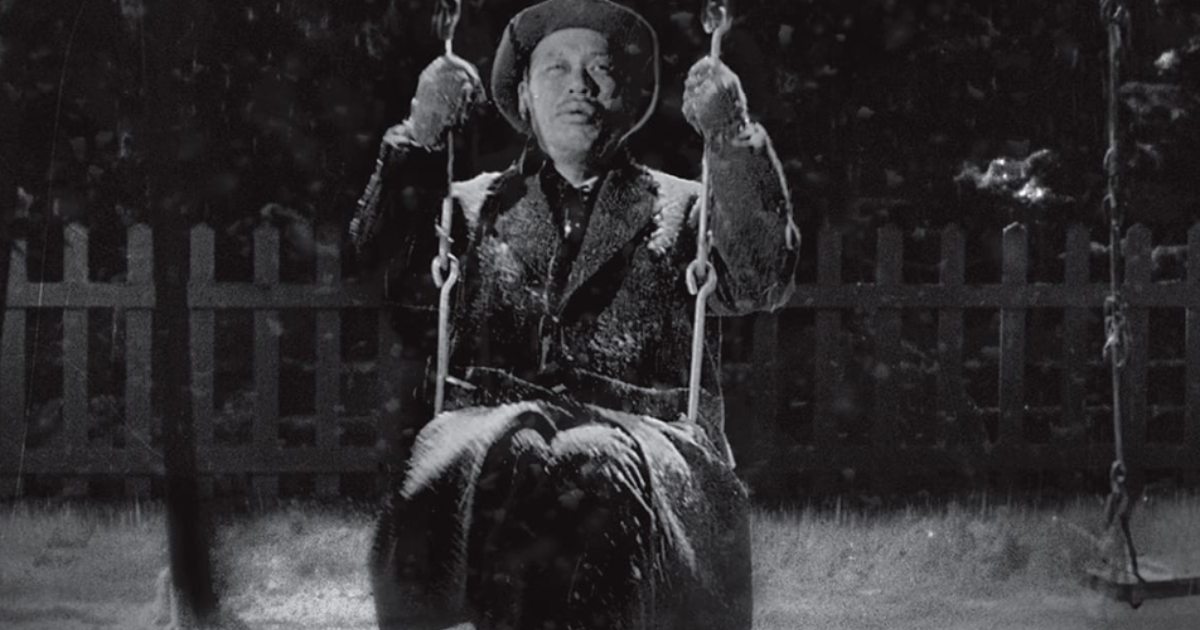 In a unique coincidence, I saw Ikiru the same day that I saw the series finale for the TV show The Good Place – another work that has dealt with similar themes of how to live a good life and how much good we are capable of putting into the world.  ….There are even some scenes about how the minutia of bureaucracy can tie us all up in knots.  But like Ikiru, it also argues that even the tiniest bit of good we can do is worth striving for, even if it takes all we have.