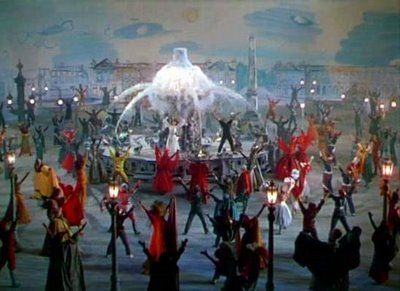 So, parts of this film overcame my by-now-established cynicism about movie musicals.  The key word there, though, is “parts” – for American in Paris had a number of elements I liked, but liked in isolation, and would have probably preferred if they’d been on their own, but mixing them together didn’t do it for me.  It’s like that culinary puzzle where you try to find a set of three ingredients where any two of the three pair well with each other, but all three together don’t work.

Gene Kelly is Jerry Mulligan, a former GI turned aspiring painter (he implies he’d been stationed in Paris during the war and just decided to stay).  He lives in an atelier somewhere on the Left Bank, down the hall from a self-described concert pianist, Adam Cook (Oscar Levant), who has a semi-regular gig at a night club backing up a French cabaret singer, Henri Baurel (Georges Guétary).  Adam hasn’t been doing much for Henri lately, though; Henri has been caught up with a new girlfriend, whom he tells Jerry and Adam all about one morning over coffee in the bistro on the corner.

Jerry can’t stay long – he’s off to try to sell his paintings on the sidewalk up in Montmarte.  As he’s setting them up, a wealthy heiress named Milo (Nina Foch) offers to buy two of them, and offers an eye-popping sum – if he’ll come with her to her hotel and hang them in her room.  She also invites him to a “small dinner party” in her hotel that night.  Jerry’s briefly swayed by the money, but when the “small dinner party” turns out to just be the two of them, a suspicious Jerry accuses her of trying to hire him as an escort.  Milo insists she’s only interested in supporting his art, and agrees to move their date to a more public place.  Over drinks, the pair agree that Milo will sponsor Jerry’s work and try to get him a gallery showing – but when Jerry’s head is turned by a pretty girl at the next table, Milo is still miffed. 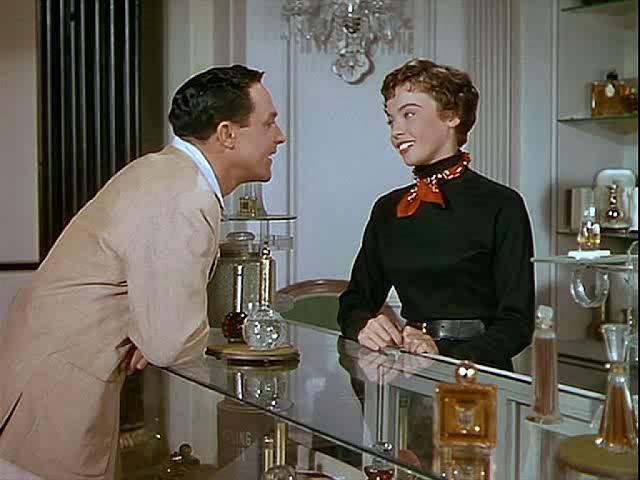 But Jerry’s too caught up in winning over the girl to notice. Lise (Leslie Caron) is indifferent when he tries to dance with her, and annoyed when he calls her at work the next day. But when Jerry actually shows up where she works, he’s apparently charming enough for her to agree to a late date that night.  She’s strangely uneasy about a drink out in public, suggesting she and Jerry take a romantic stroll along the Seine instead.

The next few weeks are a whirlwind for Jerry, with Milo piling on more and more support – buying him a studio space, booking him a gallery showing – and implying her support may come with strings attached. But at the same time he and Lise are falling more and more under each other’s sway. But when Jerry finally declares he’s in love with her, Lise balks – she’s also Henri’s girlfriend, and Henri has proposed.  She tells Jerry she can’t see him any more, but still seems torn…

So it’s your basic musical comedy love story.  You know that Lise and Jerry are going to end up together at the end, because that’s what always happens, so really this is just an excuse for Gene Kelly to sing and dance to a lot of Gershwin songs.  The whole thing was inspired by a 1928 orchestral piece by George Gershwin, and expanded with a number of other Gershwin works – MGM studio had recently bought the rights to their catalog – and so this is effectively an early jukebox musical.  It’s a bit better at coming up with a plot to string everything together, but there are a couple moments that feel shoehorned in; Jerry using the song “I Got Rhythm” to “teach English” to some of the local kids, for example. 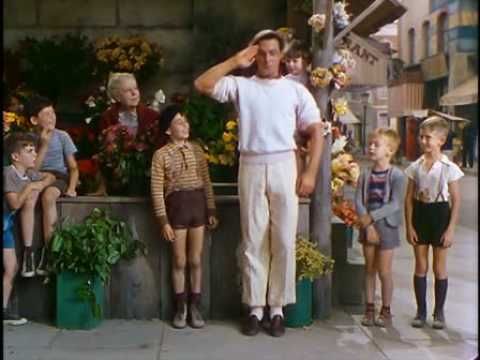 Another utterly baffling scene features Adam daydreaming that he’s giving a concert of one of Gershwin’s concertos, supported by a full orchestra, but as the scene goes on, Adam also daydreams that he is the conductor, the entire string section, the percussionists, even one of the audience members applauding at the end.  (Those who are familiar with the work of film reviewers Doug Walker – a.k.a. “The Nostalgia Critic” – and Lindsay Ellis will recognize their term “Big-Lipped Alligator Moment” to describe such a scene.) 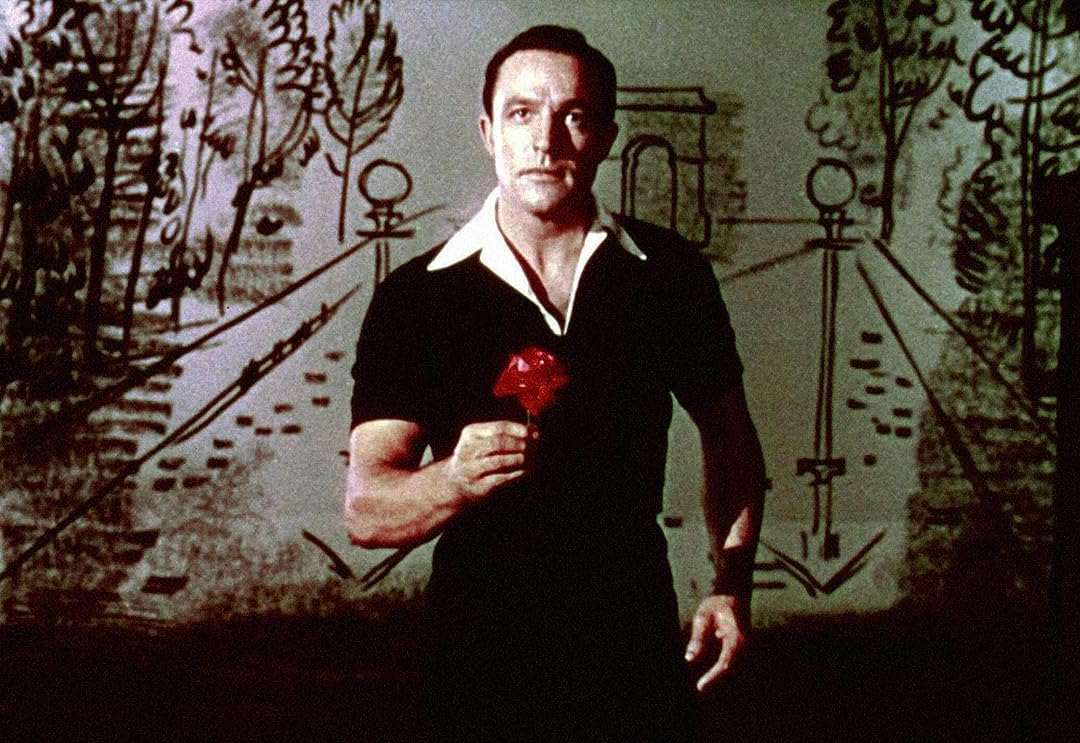 The scene that everything in the film has been leading up to, though, is a seventeen-minute dance sequence to Gershwin’s original “An American In Paris” concerto. In the film it’s staged as a sort of daydream of Jerry’s, as he sits forlornly and muses about Lise. It is beautifully staged, with about five separate sequences that each draw visual inspiration from a different French painter – there’s a Renoir section, a Rousseau one, a Toulouse-Lautrec one….it was the most complicated bit of the film to stage, with an enormous budget and a whole passel of dancers backing up Gene Kelly and Leslie Carron – both of whom lead the dancing magnificently. 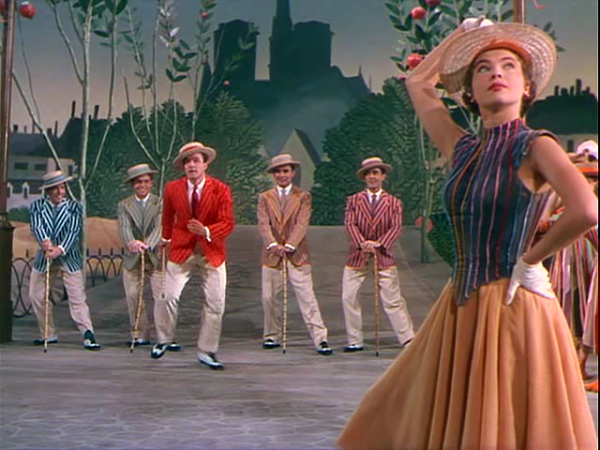 That’s the thing, though – the dancing itself and the Gershwin songs are ahead of the rest of the film. The plot which screenwriter Alan Jay Lerner has come up with isn’t bad, but could have been better – Milo is left as kind of a loose end at the end, Adam has little to do, and Lise seems to fall for Jerry pretty quickly.  I almost wish that this had been a kind of revue instead – scrap the plot and just do a festival of dance and Gershwin.