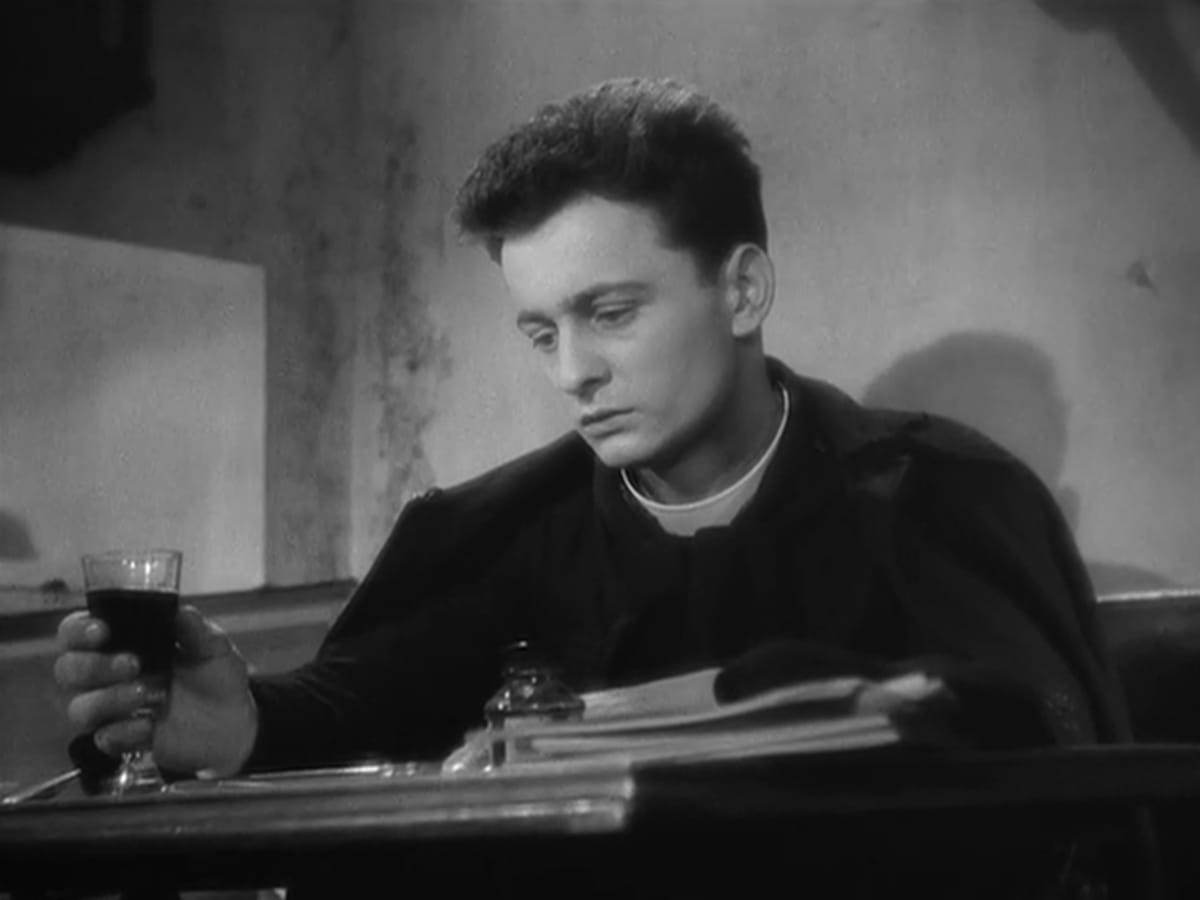 Newcomer Claude Leydu plays the unnamed country priest keeping the diary in question.  He’s just been appointed head of the church at Ambricourt, a small town in northern France; he’s innocent and idealistic, but also meek and in poor health.  Almost no one comes to his masses.  The kids in his catechism classes pull pranks on him.  He has ideas about starting community youth clubs, but no one is interested; and all he ever eats is stale bread soaked in wine (it’s all he says his stomach can handle) so he doesn’t have the energy to rally people anyway.

The one exception is when he meets with the town’s Countess (Rachel Bérendt), who has been in prolonged mourning for a son who died as a toddler.  He’s come to see her about her daughter Chantal (Nicole Ladmiral), a pre-teen who’s starting to act up some.  But their conversation soon turns to the Countess’ own lack of faith, and after a lengthy and tortured conversation, she seems to finally accept her son’s loss, and regain her faith.  ….And then she dies that night, and Chantal starts spreading rumors about what the priest was actually doing with her mother.  And then his health takes a turn for the worse…

I mean, I perfectly understand what people did.  I have no questions about who talked to whom and when.  However, I didn’t understand why anyone was behaving as they did.  Not that the film didn’t try – the whole story is told via the priest’s journal entries, with Leydu in voiceover telling us what the young priest does and how he feels moment to moment.  But it comes across as more self-absorbed than self-understanding; he feels sad, he feels isolated, he feels weak, he feels ill.  We never know why.  We never learn anything about the priest’s background, where he’s from, who his family was, whether he had friends –  we never even learn his name. His self-absorption also keeps him removed from all the other characters, and since he’s our eyes and ears in Ambricourt, we never learn about any of them either.  So we’re left just seeing things happen, and hearing how uneasy the priest feels about a lot of it, but never really find a way into the heart of any of the characters, or of the story.  It’s possible the isolation is precisely the point, but….if you want me to sympathize with your character, I at least have to find a way into your character’s head, and I wasn’t given the chance.