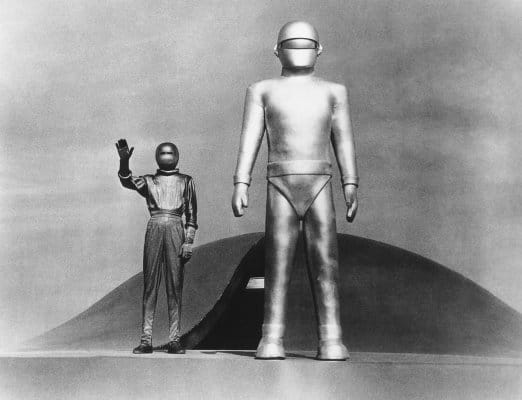 Roommate Russ had a good observation about The Day The Earth Stood Still: “It’s definitely a time capsule, but it’s a good time capsule.”

This is one of the classic examples of the sort-of-pulpy films that spring to mind when you think of 50s sci-fi, with humanoid aliens that nevertheless speak English, simplistic special effects, giant robots, and a political message worn not only on its sleeve but also posted on a lapel pin, inscribed on a baseball hat and emblazoned across its butt.  …Mind you, those are the things I like about it; the classic sci-fi stuff may be quaint from a visual perspective, but if you read about the rest of society in the 50s, where conformity was a big deal and any deviation caused your neighbors to suspect you were a Communist, the fact that a film that advocates for collaboration and cooperation was even produced during that era is a tiny miracle.

That’s ultimately the message alien Klaatu (Michael Rennie) has come to deliver to our planet.  (And yes, that is “Klaatu” from the phrase “Klaatu barada nikto” – we’ll get to that in a bit.)  After circling our planet once – attracting the attention of all the world’s armies along the way – he lands in Washington D.C., stepping out of his flying saucer accompanied by a giant robot. Klaatu claims he’s coming in peace, but a twitchy soldier shoots him in the arm anyway. Klaatu stops his robot “Gort” from retaliating, and lets the military bring him to a hospital. Not because he’s hurt badly – in fact, Klaatu recovers from his gunshot in just a few hours. He’s cooperating to win favor with the president, hoping he can organize a meeting between Klaatu and all of the world’s leaders for an important discussion. 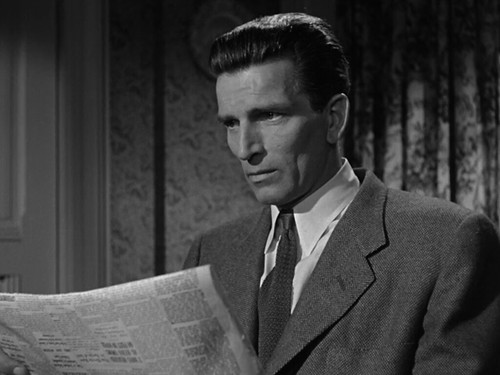 When everyone refuses Klaatu’s invitation – they’re all too skeptical of Klaatu, you see – he decides to sneak out of the hospital and find someone who can figure out how to get the world to listen to him.  Taking on the alias “John Carpenter”, he rents a room in a boarding house, befriending fellow residents widow Helen Benson (Patricia Neal) and her son Bobby (Billy Gray).  Bobby thinks “Mr. Carpenter” is super-cool – he’s real good at helping Bobby with his math homework and he likes going to movies – but he’s got a couple weird habits, like carrying around diamonds to use as currency and exhibiting complete ignorance of Abraham Lincoln.  Helen finds his a bit odd as well; but she’s also impressed by “Mr. Carpenter’s” patience with Bobby, and also by his compassion – of all the residents, “Mr. Carpenter” is the only one who hasn’t automatically jumped to the conclusion that the missing spaceman is dangerous.  Eventually both Bobby and Helen learn Klaatu’s real identity, and what he’s come to Earth for – but the military has been on the hunt for him all along, and may get to Klaatu first before he can fulfill his mission.

I mean, if you’ve seen a Twilight Zone episode, you can predict what Klaatu wanted to say – that we should all get along, that our fears are dividing us, that we’re heading down the path to self-destruction.  It’s a message that sci-fi returned to a lot during the Cold War.  The film also had a bit of a subtle message about how human nature makes us a little more likely to fear than to trust – there’s a scene where “Mr. Carpenter” and Bobby have joined the curious throng that’s checking out the parked spaceship, and are quizzed by a radio reporter collecting soundbites from the crowd.  After speaking extensively to a couple of other bystanders about how scared they are, the reporter turns to Klaatu for his opinion.  But when Klaatu starts saying that the “spaceman” might not be harmful, the reporter thanks him and walks away.  Not only are we more fearful, the film suggests – we’re being groomed that way. 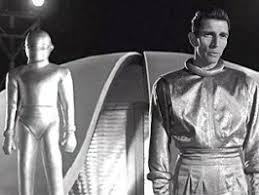 And the film may be right.  We come to the famous phrase “Klaatu barada nikto”, which Klaatu teaches to Helen during a tense moment and orders her to go say those words to Gort if anything should happen to him.  That phrase later went viral – there’s a TV Tropes page devoted just to that phrase alone, laying out some of the ways it’s been re-used.  In some cases it’s used as a recitation meant to bring about some kind of destructive force.  But the original usage is meant to stop a destructive force – it’s a command to Gort to stand down, and to collect Klaatu so they can beat a hasty retreat.  People who’ve seen the film know this, but those who’ve only heard the phrase seem to assume it’s something sinister.

We prefer to fear what we don’t know, and that will be our undoing.  That’s part of what Klaatu is trying to warn us.