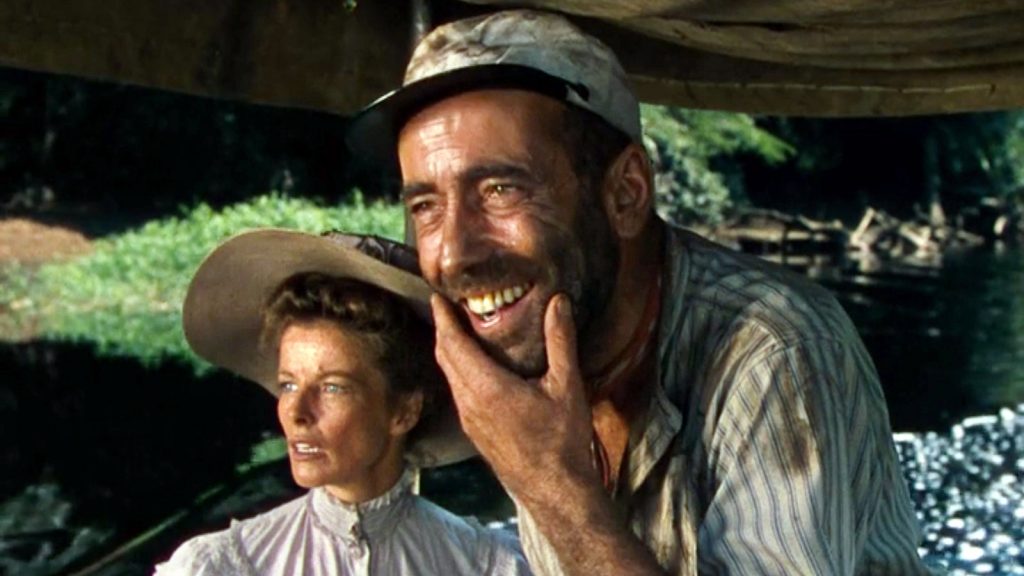 See, now this is the Katherine Hepburn I know.

I’ve had a bit of a soft spot for this film since seeing it first at the age of about nine when the Congregational Church in my hometown had a “Classic Movie Festival” one summer.  It was the first time I can remember being introduced to a “Hollywood classic” in any capacity, and sparked a curiosity about movies that has never really faded (although I couldn’t really indulge in the classics until much, much later).

Forty-some years later, I do notice some of the weak points. It’s a pretty simple plot; Hepburn is Rose Sayer, the prim Englishwoman who’s part of a brother-sister pair of missionaries in German East Africa in 1914, and Humphrey Bogart is Charlie Allnut, a Canadian expat who’s turned freelance mechanic and handyman, ferrying himself from gig to gig and running errands on his little steamship The African Queen.  He regularly brings the missionary Sayers their mail, and at the top of the film also brings them the news of the outbreak of the Great War.  This makes them British subjects in German territory, he warns them; they may want to get gone.

The Sayers fervently insist that they can’t abandon their flock.  But soon Allnut hears that the German army is kidnapping indigenous villagers and forcing them into war, burning the villages as they go. He rushes to the Sayers’ village to warn them, but is too late – the village is burned, the locals are gone, and Rose’s brother has died of shock, leaving her all alone – and already packed, having stoically accepted her fate.  After a very brief funeral for Brother Sayer, Rose steps aboard the Queen.

Allnut’s initial plan is to ferry them both somewhere out of the way and lay low, but Rose asks some pointed questions about the German army and the contents of Allnut’s boat; a German gunboat holds court over a lake downriver, preventing the English army from coming to their rescue, but conveniently Allnut has some bits and bobs on his boat that could be turned into torpedoes.  She insists that Allnut do his duty for King and Country and take down the German gunboat – singlehandedly.  Allnut points out the myriad problems with her plan, but Rose is very, very insistent, so….

Now, all that is just the first fifteen minutes or to set things up.  The rest of the film is an odd-couple adventure yarn, thrusting the couple into whitewater rapids, sniper attacks, hippo sightings, spartan bathing facilities, swamps, thunderstorms, leech attacks, busted propeller shafts, and – each other’s arms.  That’s the bit that felt the weakest on a rewatch; the script was clearly trying to suggest that the cloistered Rose was being swept off her feet by the adventure of it all, and by Allnut’s strength and can-do spirit, but Hepburn plays Rose with such spunk and independence herself that her falling for Allnut felt a little forced. 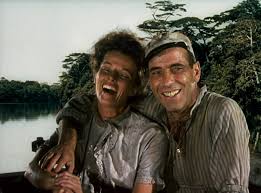 But you know something? I really didn’t care.  I didn’t care when I was nine (hell, I probably didn’t even notice the love story was rushed), and I don’t care now, because everything else is just a big ol’ hoot.  Hepburn gets some delicious bits of schtick in this – one scene I remembered from before came after a drunken Allnut blows up at Rose, insulting both her plan and her. He wakes up the following morning with a massive hangover – only to find a poker-faced Rose going through all three boxes of gin he has on board, dumping the contents of each and every bottle into the river behind them.  And then fast-forward about 20 minutes, and Rose gets to laugh herself silly at the sight of Allnut’s hippo imitation.

And speaking of which, props to Bogart for his performance too; his chemistry with Hepburn is charming, and I’m actually surprised it was their only pairing.  And even more surprised to learn that this was Bogart’s only acting Oscar.  Hepburn was also nominated for her performance, losing out to Vivian Leigh for Streetcar Named Desire.  Still, this film marked a major turning point in her career – letting her transition away from the flighty free spirits she’d been playing before, and take on a wider variety of roles.

Most critics agreed that the plot was a little thin and straightforward, but it was just such darn fun and the leads were so great to watch that they didn’t care either.  And I’m pleased to find that it still holds up to my nine-year-old memory.