Partway through watching In A Lonely Place I became convinced of two things – that it would absolutely work well with a remake today, and that it could nevertheless have been much better written.

The premise and plot seem like they could work.  Humphrey Bogart is Dixon Steele, a screenwriter on the road to being a has-been – he’s got a bit of an alcohol problem, and an even bigger anger-management problem.  His agent tries to get him a deal adapting a potboiler book into a movie, but it’s the kind of book Steele hates; so when he sees Mildred (Martha Stewart), the coat check girl at his local bar is reading it, he invites her back to his place to tell him the plot.  ….He has other intentions as well, but she’s pretty prim and insists on just sticking to business.  Besides, his new neighbor across the courtyard – a blonde named Laurel Gray (Gloria Grahame) – turns his head instead.  So after only a few minutes, Steele gives Mildred cab money and sends her on her way. Luckily for Steele, he’s turned Gray’s head as well.  Because when Mildred is discovered dead the following morning, Steele is their main suspect – he was last seen taking her home.  But Gray is able to confirm she saw Steele sending Mildred away at midnight, and that the girl left alone.  A grateful Steele realizes that the reason Gray knew this was because she was peering out her own window to check him out.  …All the more reason for him to get to know her better.

And soon the pair are caught up in a whirlwind romance, with Gray playing secretary as Steele gets to work on his screenplay. She also gives Steele moral support as the police continue their investigation of Mildred’s murder; but as she comes to know Steele, she comes to also see the depth of his temper, and starts to have her own suspicions.

….So, yeah, you see what I mean?  There’s a lot of different ways that plot could go, and it did end up going to some places I didn’t expect.  It’s a plot that I could also totally see today, with a couple of thriller-movie regulars in the leads, like Keanu Reeves and Jessica Biel or something.  However.  The plot is one thing – the script is another. And in this case, the script was….kinda not good.

It’s not uniformly terrible, mind you – some bits did stand out, like a scene where Steele is having dinner at one of the detective’s houses (they served together in World War II and are on friendly terms), and Steele speculates how Mildred’s murder could have happened.  He has a monologue that suggests he knows a little more about what it’s like to kill someone than your average person would do, but his detective buddy chalks that up to Steele’s “writer’s imagination”; it’s still vivid enough that I wondered about Steele for several scenes after. 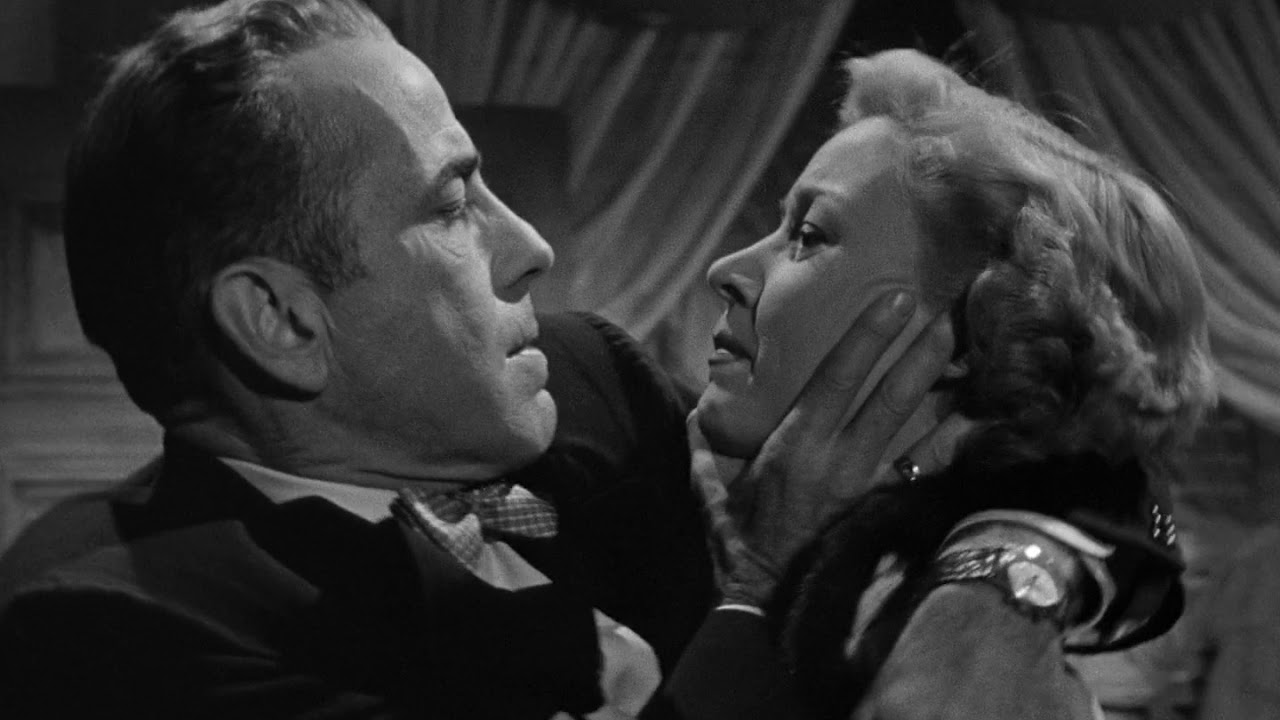 But that’s an exception; most of the rest of the film was uneven in its characters’ motives and clunky in its dialogue. Gray is almost cold towards Steele when they have their first private conversation, but by the next scene they’re all but living together, and for the life of me I could not understand what she saw in him.  Steele’s agent is in turns buffoonish and sympathetic, depending on what the script needed at the time. The film even hints at some skeletons in Gray’s closet – introducing a domineering and protective friend named “Martha” who got her out of an earlier scrape with another dangerous  man – but after we meet Martha, she disappears from the script completely, and we never learn what Gray’s backstory was, really.

Ultimately it feels like the screenwriter Edmund North should have maybe put this through a couple more rewrites before filming.  Bogart does what he can with the material, as do the rest of the cast (with varying success) – but the writing itself seems something of a weak link.