I have said in the past that I sometimes doze off mid-film and have to go back and watch again.  This time I blame the film for trying to sing me to sleep.

Rio Grande stars John Wayne as “Kirby Yorke”, a former Union soldier stationed in the Texas frontier near the Rio Grande border with Mexico.  He’s got a lot on his hands just keeping his post running – keeping his men trained, keeping their wives and children protected – and coping with the local Apache raiding parties, who keep slipping across the border to Mexico and evading capture.  But then, to complicate things, the Texas marshals come calling to say that one of his recent recruits, Travis Tyree (Ben Johnson), is a fugitive wanted for manslaughter.  Tyree steals Yorke’s horse to escape and lay low in the surrounding desert.

But Yorke can’t even deal with that because another one of his recent recruits is his own son Jefferson (Claude Jarman Jr.). Yorke hasn’t seen Jeff for fifteen years; Jeff’s mother was a southern belle, and Yorke fighting for the Union in the Civil War caused an understandable rift. So Jeff has instead been at West Point up until now.  And just as Yorke and Jeff have worked out an uneasy truce – along comes Jeff’s mother Kathleen (Maureen O’Hara), to persuade Jeff to come home.  And right when Yorke and Kathleen are trying to work things out – there’s an Apache raid. 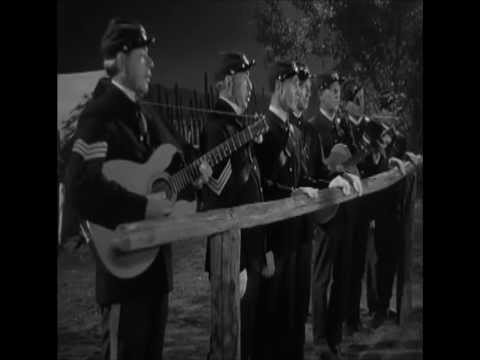 Now, that sounds like there’s a lot going on already, for a film that’s just over 90 minutes. And it is. But frustratingly, director John Ford saw fit to throw in about four or five music breaks, with everything grinding to a halt as a group of singing soldiers serenades the cast with one or another folk song.  They sing to Yorke’s men as they all ride out after an Apache party.  They sing “I’ll Take You Home Again, Kathleen” to Kathleen when she first arrives at the camp.  They sing an Irish folk song to entertain a visiting general.   They sing to a group of kids to soothe them before they are brought to a neighboring camp for safety’s sake.  And each time we hear the entire song, in four-part harmony and full verses.

They sing quite nicely, mind you, it’s just that it eats up time, and the backstory of the characters ends up getting short shrift; we only get a couple seconds of explanation for Tyree’s attempted crime, and almost no time for Yorke and Jeff to reconcile.  The scenes with Yorke and Kathleen touch briefly on their differences – Yorke was part of a platoon that burned Kathleen’s family plantation, and she’s understandably bitter – but never really gets into how a southern belle ended up with a Union soldier anyway, or what she’s even been doing for the past fifteen years.  Just when their scenes start to come close to revealing something about their backstory, suddenly there’s a messenger coming in with news about Tyree, or a warning of an Apache party, or those damn singers come along to sing to Kathleen again, and I’m left in the dark.

Reportedly John Ford didn’t really want to make this film in the first place. He wanted to move straight on to The Quiet Man (coming later on the list), but the studio ordered another Western from him first.  So he threw this together with Wayne and O’Hara, since they were already on board for The Quiet Man.  And the singing troupe included one of his son-in-laws, so he probably got them for….a song.  In essence, then, this is probably like one of those contractual obligation albums that musicians will do time to time, something tossed off to satisfy a contract. 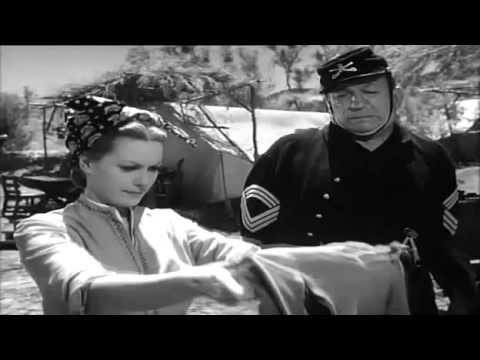 Roommate Russ (as he is now yclept) pointed out one interesting shot, though, that was perhaps unintentionally symbolic. There’s a scene where Yorke’s men are trying to rescue a bunch of civilians being held hostage by an Apache party; the civilians are holed up in a church, which has a decorative cross-shaped cutout in one of its front doors; when Yorke’s men sneak in through the back door, the cross cutout makes for a convenient spyhole, and when the Apaches get wise to their rescue attempt, Yorke’s men shoot at them through the cutout.  Roommate Russ mused that the Apaches being confronted with a cross through which people shot at them was one heck of a metaphor for Manifest Destiny.