The sharp-eyed reader will note that I have a new tag category for my entries now – for this film joins Top Hat and Adam’s Rib as being a film where I suddenly understood why a given Hollywood notable I’d been hearing about all my life was….well, notable.  In this case, I finally Got It about why people speak so highly of Ace In The Hole’s Billy Wilder, who directed, produced, and wrote for the picture. 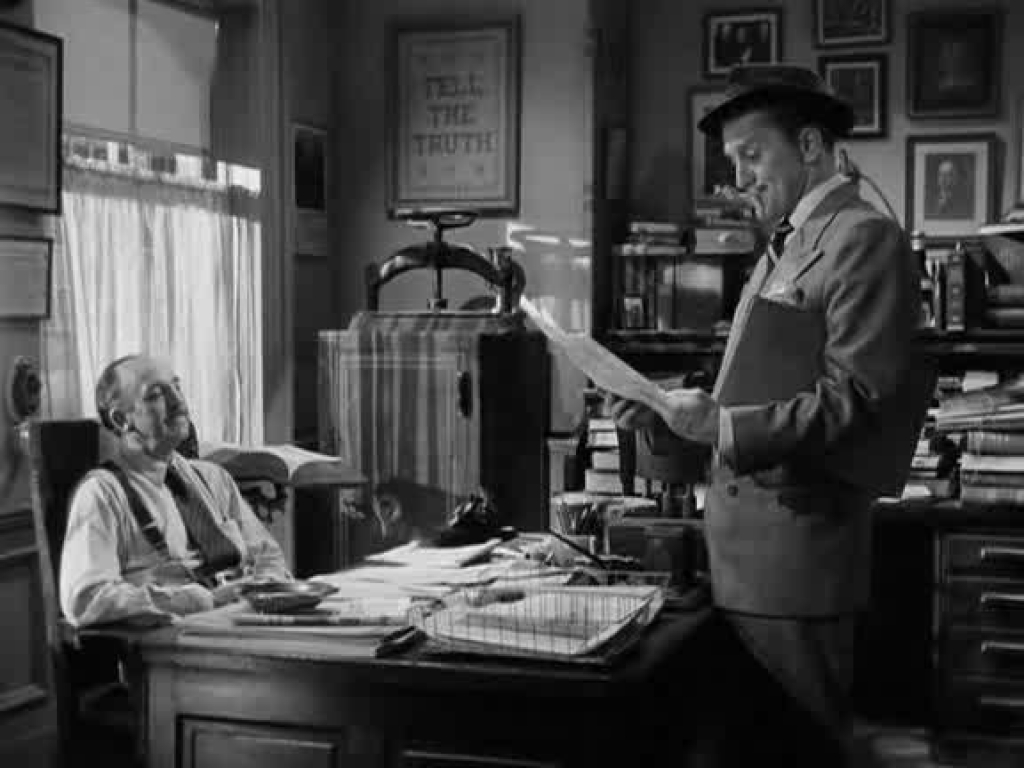 In this case it was the script itself that made me sit up and take notice. Kirk Douglas stars as “Chuck Tatum”, a down-on-his-luck reporter trying to bounce back from a run of bad luck when he strolls into the head office for an Albuquerque daily paper.  He’s written for the big leagues, he brags – papers in New York, Chicago, and other big cities – but some drinking and philandering got him fired. He’s cleaned himself up, he swears, and is looking for a chance to get back on the job.  The bemused head editor agrees to take him on, but keeps Tatum on a tight leash for the ensuing year thereafter, sending him out to cover things like Boy Scout jamborees and low-level weather events.  Tatum grumbles a lot – in one scene he rants to the rest of the office about how bored he is – but everyone has learned to ignore him, and the head editor keeps sending him out to do puff pieces.

It’s while Tatum is on his way to one such puff piece – a charity rattlesnake hunt – that he discovers breaking news. He and his photographer Herbie (a fresh-faced Robert Arthur) have stopped for gas at a tourist trap in a tiny town, but no one is manning the station – because they’ve just rushed over to the cave behind the station, where the station owner’s son has just been trapped under a fallen rock.  Tatum rushes back to the cave, eager to cover the story and report on the rescue effort.  But when he hears their rescue plan should take only a few hours, however, he talks them into a more complicated plan, one that might take a few days.  Oh, and can he stay at the station and cover their efforts?…

In the days when “fake news” is a popular insult, Tatum’s behavior seems pretty familiar as he massages the situation for the sake of the story. He cozies up to the local sheriff – a lackluster career lawman up for re-election – and promises to talk up his reputation if the sheriff keeps other newsmen away.  He persuades the victim’s wife Lorraine (Jan Sterling), who was on the verge of leaving him anyway, to stay around and play the loving spouse – and make thousands off the crowds now coming to watch the spectacle.  He makes very public visits to the cave every day to get his exclusive interviews with the victim Leo (Richard Benedict).  In short, he does everything he can to prolong the situation, riding Leo’s plight so hard that he nearly forgets that they’re supposed to be rescuing him.

At the time of its release, other critics found the story pretty unbelievable. Tatum is heavily unpleasant (I turned to The Roommate during Tatum’s rant to his fellow reporters and said, “So, I’m just checking – it’s not just me, he’s a jerk, right?”), and manages to bowl over the locals involved in the rescue pretty easily.  Lorraine is also all too willing to play along for her own ends, going so far as to bring in a circus tent and carnival rides to cater to the growing crowd (a sign primly states all proceeds go to Leo’s rescue fund).  But Wilder was inspired by a similar pair of human-interest stories involving people trapped in caves – one is even name-checked during the film, with Tatum citing the reporter as a role model.  And from what we’ve seen of human nature in the years since 1951, it doesn’t require that much of a leap of imagination to accept that a reporter as persuasive and selfish as Tatum could cause a good deal of ruckus, particularly when he meets equally selfish people to collude with.  In fact, I found Wilder’s script to be remarkably astute, and that was part of its appeal for me. 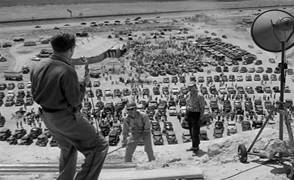 The leads are all fine and dandy, as well – I didn’t like watching Douglas as Tatum, but that had more to do with Tatum just being a jerk, and paradoxically speaks to how well Douglas was doing in the role.  The scenes that really stick with me, though, are all long crowd scenes, charting the growing spectacle; in one, a train pulls up across from the gas station, bearing a cloth banner proclaiming that it’s a special train rigged up to bring people to the site.  Passengers all start pouring out of the doors before the train even comes to a stop, everyone racing towards the cave and losing themselves in the huge carnival that’s sprung up alongside it.  And towards the end, after the events have run their course, there’s an equally-quick exodus of spectators, leaving Leo’s father wandering alone in the clearing before the cave, staring dumbstruck at the emptiness and silence and looking utterly small.

You know that if such an event happened today that someone like Tatum would be working to make #SaveLeo a trending topic on Twitter and that we’d be seeing Instagrammers posing for selfies by the cave, with the circus moving on just as fast – if not faster – when the whole thing died down.  And that, like I said, is why I found Wilder so prescient – he was writing about 21st-Century social media in 1951.