Like Treasure of the Sierra Madre, this was a film I knew by reputation only; and also like Sierra Madre, I’ve been pleasantly surprised by All About Eve.

As I told my roommate –   it’s like Single White Female meets A Star Is Born. Bette Davis plays Margo Channing, a renowned Broadway actress, and Anne Baxter is Eve Harrington, one of Margo’s mega-fans. Margo’s friend Karen (Celeste Holm) takes pity on Eve hovering by the stage door one night and invites her backstage to meet her idol, along with the rest of Margo’s creative team – playwright Lloyd (Hugh Marlowe), frequent creator of Margo’s star vehicles and Karen’s husband, and Bill Sampson (Gary Merrill), Margo’s usual director and longtime boyfriend.

Everyone is charmed by the depth of Eve’s ardor, and then touched by her hard-luck story (brought up penniless, a young widow of a World War II pilot, saving all her pennies to see Margo again and again) and Margo spontaneously offers Eve a job as a sort of personal assistant, even though she already has one, longtime maid and dresser Birdie (Thelma Ritter).  Birdie’s the first to spot some of Eve’s “helpfulness” as ambition, but gradually the others start to realize that Eve doesn’t just admire Margo – she wants to be Margo, complete with a starring role in one of Lloyd’s plays, swank penthouse apartment, and an admiring boyfriend as her collaborator (although she’s gunning for both Lloyd and Bill).  Worst of all, everyone realizes just how skillfully Even has been manipulating them all from the very start.

The story of an older star getting shoved aside by a younger one isn’t an unfamiliar one. What fascinated me about All About Eve, though, was how it addressed why Margo was in danger of being brushed aside. Margo is pushing 40, but the plays Lloyd has been writing for her still cast her as the same dewy-eyed ingénues she’s always played – because the public doesn’t want to see her playing women her own age.  One day – and it won’t be long – she’ll just be too old for the part, and Eve plans on being ready and waiting for that day to arrive (or plans on hurrying it ahead a bit).  There’s a lengthy conversation between Margo and Karen at one point where Margo laments her lost youth and the loss of options for actresses her age – and rails against the double standards that have left her with such few options in the first place, not just in acting but in life overall.  Granted that this film was just a decade off from Betty Friedan and The Feminine Mystique, but I was surprised to see these kinds of complaints given a voice.  Margo eventually finds a way through the situation with some grace intact, but after her conversation with Karen, it still feels the price is fairly high. 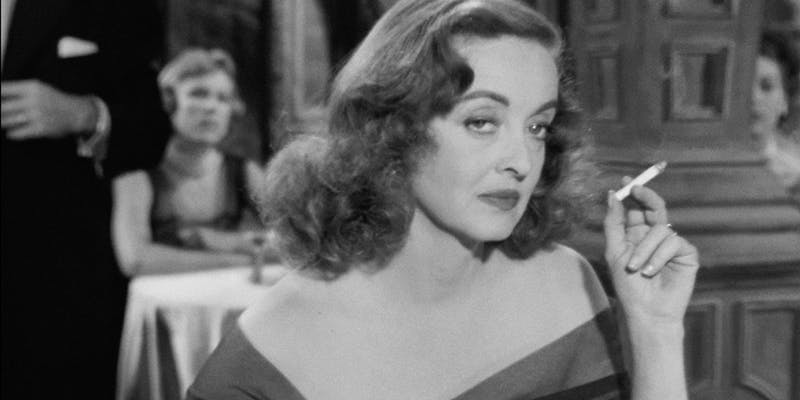 Critics have pointed out that Sunset Boulevard (which I’ll be getting to soon) also dealt with a similar aging-actress-has-to-cope theme; both films came out the same year, so there must have been something in the zeitgeist.  All About Eve, though, is the one that took home the Oscar for best picture that year.