Back when I did I Know Where I’m Going!, I mentioned that I’d been expecting something different from it and been pleasantly surprised. What I was expecting was one of those low-key comedies about eccentric people and wacky hijinks in a small twee town; it’s a genre that the UK and Ireland seems to do a lot, with (just off the top of my head) Waking Ned Devine, The Full Monty, Calendar Girls, Brassed Off, Kinky Boots, Saving Grace, Millions, The Matchmaker, and The Englishman Who Went Up A Hill But Came Down A Mountain all being more recent examples.  You know the kind – it’s usually set in a small town, often an economically depressed one, but one where everyone knows each other and has patience with each others’ eccentricities, especially when someone comes up with a Wacky Scheme that will improve their finances.  Usually there is a stuck-up resident who tuts a lot because they Do Not Approve and are determined to Put A Stop To This Sort Of Thing.  Often there is a government authority of some sort who is coming to Investigate The Goings-On and the whole town conspires to keep them in the dark; or, the main character is a person from the city who’s trying to settle in and Discovers Themselves.  Whisky Galore is one such comedy; and it reinforced for me that I’m getting kinda sick of such comedies.

Don’t get me wrong, it’s perfectly inoffensive and cute.  In this case the town is an island –  Todday, a tiny speck of land just off the northern coast of Scotland. There is little to do on Todday except work, chat, and have a drink at the pub – so there is great consternation when wartime rationing puts an end to Todday’s whisky supply.  But after a few weeks, a freighter runs aground off the coast of Todday.  The town rescues the crew, who mention in passing that the freighter – which they’ve abandoned on a sandbar – had nearly 50,000 cases of whiskey in the hold. And soon the whole town moves on from rescuing the crew to rescuing the cargo. 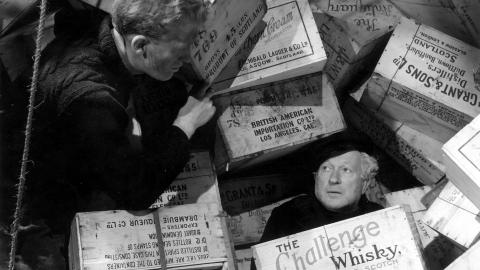 Of course, there are those who don’t approve. Captain Waggett (Basil Radford), the stuffy English expat who’s the head of Todday’s Home Guard, considers raiding the freighter to be looting, and is determined to Put A Stop To It.  The Ultra-Religious widow Mrs. Campbell (Jean Cadell) is also unimpressed, as she doesn’t approve of drink.  But Waggett and Mrs. Campbell each have their sabateurs; Mrs. Campbell’s son George (Gordon Jackson), the town schoolteacher, is hoping to marry the lovely Catriona (Gabrielle Blunt), daughter of the local postmaster Mr. MacRoon (Wylie Watson). And one of Waggett’s underlings, the more relaxed Sergeant Odd (Bruce Seton), has his eye on Catriona’s sister Peggy (Joan Greenwood).  When both come to ask Mr. MacRoon for his daughters’ hands, MacRoon mentions that gee, there really should be a traditional Scottish betrothal party, and gosh, we’d really need whisky for that…

The plot is hatched, the authorities are thwarted, the hijinks commence, the women are wooed, the day is saved, yadda yadda yadda. 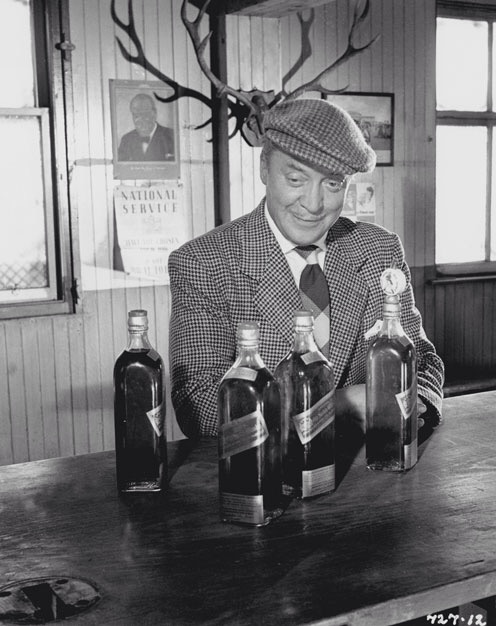 I know I sound like a miserable cynic there; but I’ve just seen so many of these kinds of comedies by now that it’s starting to get stale for me.  And the hell of it is that I liked them at first; I saw Waking Ned Devine in the theater, as well as Saving Grace (that one was even as a date).  One of my favorite television shows is Northern Exposure, arguably an American version of this kind of story.  But after having seen so many, I’ve learned to recognize the formula, and it just puts me off – even with one of the films that has ostensibly set the formula.

One of the elements that makes me roll my eyes, too, is when the films lean into the eccentricity.  There’s often a bit of point-and-laugh-at-the-kooky-country-people going on, particularly if the film is set in rural communities in Scotland or Ireland. While it’s not meant as offense, it can sometimes feel a bit like mockery of cultures that are still just a tiny bit “foreign” even within the United Kingdom.  It may be my Irish roots coming out, but a lot of the “kooky stuff” we’re being encouraged to find eccentric is more of a legitimate cultural difference, so I can get a little cranky.

I grumbled about all this to the roommate, and when he asked, I admitted that no, the film itself hadn’t done enough to overcome that with me.  But when he asked if it was just plain bad, I had to admit that no, it wasn’t.  It was perfectly cute and pleasant. The biggest nit I can find to pick about this film concerns Cadell and Greenwood’s accents – I don’t know what accent the MacRoon sisters were using, but that sure as heck wasn’t Scottish.  Greenwood, in particular, was sounding distinctly un-Hebridean, and talked more like she was trying to do a Marilyn Monroe imitation. But everything else was perfectly charming and quaint and twee and cute, and it’s possible that that’s exactly why I ultimately sighed heavily and resisted.