There’s so much to think about in The Third Man that it’s taken me nearly 24 hours after watching to realize that we never do find out who the “third man” actually is, or if he even exists.  I promise you it doesn’t matter, though, and nor would you care.

The story takes place in post-war Vienna – still occupied by the four main Allied powers and still sporting plenty of ruined buildings and rubble.  American Holly Martins (John Cotton), author of a series of pulpy Western novellas, has come at the invitation of an old college buddy named Harry, who says he can get Martins a job. But when Martins gets to Harry’s flat, the doorman tells him Harry was killed by a passing truck just that morning.  Well, darn.

Martins attends the funeral, planning to head back to the United States right after. But a conversation with a British army official, Major Calloway (Trevor Howard), changes his mind – Calloway implies that Harry was a racketeer in Vienna’s black market. At first the scandalized Martins intends to stick around and clear Harry’s name. But further conversations with Harry’s other associates – a mean-faced Austrian baron, a shady Romanian thug, a secretive doctor – suggest that not only might Calloway be right, but that Harry’s death also may not have been an accident.  Martins also starts getting to know Harry’s girlfriend Anna (Alida Valli), a Czech actress living in Vienna with a false passport Harry forged for her. Anna was very devoted to Harry and wants to help, but has her own troubles – someone tips the Soviet Army off to her presence and she’s in danger of deportation.  The sympathetic Martins starts trying to help her as well.

And right when Martins is starting to think he’s getting close to figuring out how Harry died – he learns there’s a possibility Harry may not even be dead.

And when it comes to a discussion of the twists and turns of the plot, I am going to stop right there, because everything after what I’ve just told you was a surprise for me and I am going to leave you all to enjoy the the same way.

This came across as a strangely modern take on the film noir.  During the opening credits, I chuckled when I saw that the entire film was being scored by a zither – an instrument I associate with my third grade school music teacher. But it works here – the music manages to be both perky and jaded simultaneously, and perfectly fits with the shabby and down-trodden daytime Vienna.  And for the nighttime shots, where Martins is chasing or being chased by one or another shadowy figure through the streets, the music comes across as an ironic and worldweary counterpoint. 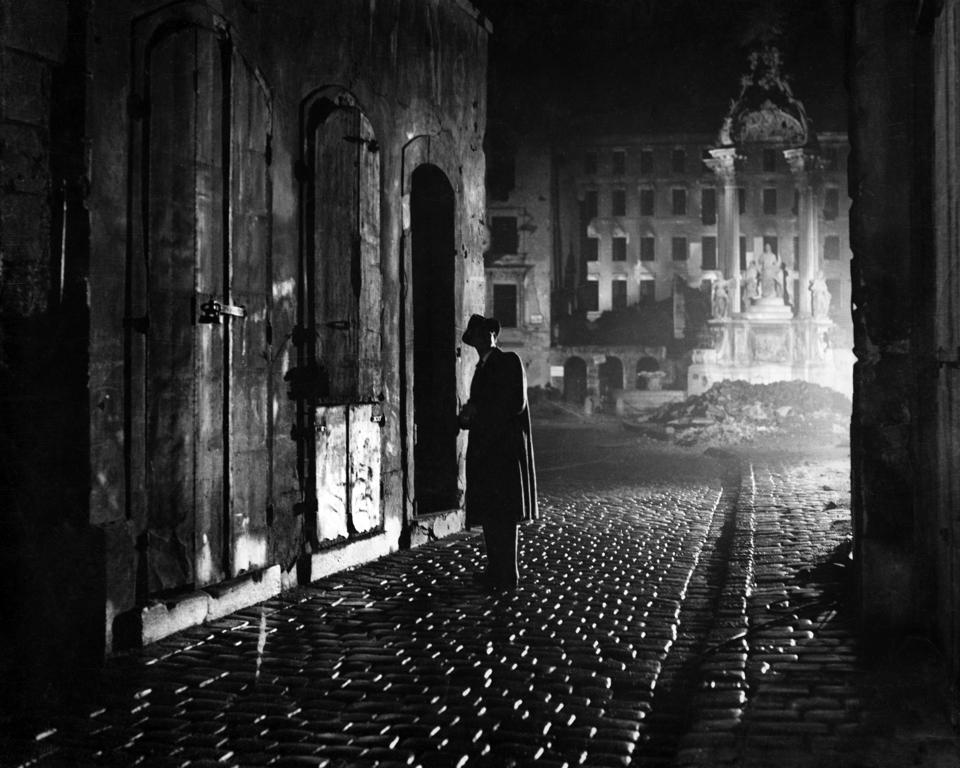 And what shots and what shadows!  The use of light and shadow here is gorgeous – the people Martins talks to are forever stepping into and out of darkness, flitting between shadows and pools of light as he chases them hoping for illumination.  Orson Welles has a smallish role in the film, and over the years some have claimed that he was an unofficial second director alongside the credited Carol Reed.  But that wasn’t the case (even though Welles didn’t try that hard to discourage the rumor); at best, Reed had seen some of Welles’ films previously and may have unconsciously been influenced.  Welles did throw something in, however – during one speech, he speaks about how a country suffering from social upheaval ironically produces amazing art and music at the same time.  Welles came up with an especially pithy, and often-quoted, new ending for his speech:

“You know what the fellow said – in Italy, for 30 years under the Borgias, they had warfare, terror, murder and bloodshed, but they produced Michelangelo, Leonardo da Vinci and the Renaissance. In Switzerland, they had brotherly love, they had five hundred years of democracy and peace – and what did that produce? The cuckoo clock!”

It’s a punch line that manages to be both amusing and cynical – perfect for the world this film was creating.  Nothing ends perfectly for anyone; no one ends in disaster either, actually, but still no one gets everything they want, and everyone has to settle for “good enough” with a sort of shrug.  In the very last scene – when Martins tries to talk to Anna on the street, and she passes him by without a glance – Martins doesn’t try to follow her, or stop her, or even call after her; he just gives up and watches her go.

The film – rightly so – went on to win an Oscar for cinematography.