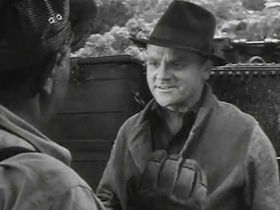 Now I know that my opinion of Jimmy Cagney has been forever changed since seeing him in Yankee Doodle Dandy; he was the best bit of this film for me.  …Unfortunately, in this case that’s a bit of damning with faint praise.

This was a return to form for Cagney; he was a bit low in cash, and knew the public liked seeing him play gangsters, so he shrugged and went back to doing a gangster film.  In this case, he’s “Cody Jarrett”, the head of a criminal outfit based in southern California, exerting ruthless power over his underlings and answering only to his doting mother. One of their raids goes a bit pear-shaped and the police start closing in; after Jarrett wounds one of the federal officers during a getaway, he decides to use an escape plan he’s always had in his back pocket – sneak up to Chicago and confess to a smaller crime there.  The Chicago crime will carry a lighter sentence, and will also be a convenient alibi for the California job.

The Chicago police are dubious, of course, as are the feds; so they concoct their own counter plan, sending an undercover agent Hank Fallon (Edmond O’Brien) to serve as Jarrett’s cellmate and gain his trust.  Maybe he’ll brag about the California job, the feds figure.  While Fallon does win Jarrett over, he takes Fallon into confidence on something entirely different – an escape attempt.  Jarrett trusts Fallon so much, in fact, that he asks Fallon to escape with him and join his gang, giving Fallon a front-row seat to a huge job – robbing the payroll safe at a chemical plant outside Los Angeles. Now all Fallon needs to do is figure out how to get word to his boss…

…So, Cagney’s great in this. And the tapdancing Fallon is doing to keep up his cover while winning Jarrett over is great fun to watch as well.  But that doesn’t even start until about a half hour into the film, and the whole first act felt like it was getting bogged down with a lot of procedural busy-ness – both from Jarrett’s gang and from the police.  There’s a sequence where the feds have spotted Jarrett’s mother in a grocery store and round up a squad to tail her in hopes she’ll lead them to Jarrett.  But the sequence is prefaced with a couple minutes’ worth of the officers discussing the exact procedural strategy they’ll be using, and there’s a good deal of back-and-forth discussion between them during their chase as well, and I found it….pretty dull.  There’s something to be said for verisimilitude, but your average audience doesn’t watch a car chase scene to learn police tactics, they watch a car chase scene to…watch a car chase scene, you know?

The roommate didn’t mind the procedural bits that much; but when we discussed that after the film, his examples of moments he liked all seemed to come after Fallon had entered the story.  Everything before Jarrett’s escape to Chicago felt drawn-out, like the writers felt they needed a detailed excuse just to get Jarrett and Fallon into the same room.  I’ve since read that the original screenwriters were an especially meticulous pair who felt that they had to very carefully plot each and every beat of action and line of dialogue, and that when Cagney’s friends read it they tried talking him into dropping out.  But Cagney was determined to do something with it, enlisting some of those very friends into helping him with rewrites (none other than Humphrey Bogart is supposed to have weighed in on some bits).

So on the whole this was just kind of….fine.  Cagney does get a dramatic final scene – maniacally laughing as he stands atop an exploding tower and hollering “Top of the world, ma!” – but I just wish the rest of the film had matched that mania with more consistency.