When producer Walter Wanger pitched this film to studios, he described it as “Mrs. Miniver meets Brief Encounter“. Mrs. Miniver I can see, but I’d have gone with Mildred Pierce instead, for the fierceness with which a mother tries to protect her family.  Either way, I still dug it.

It’s that mother, Lucia Harper (Joan Bennett), who carries the film.  She’s mother to two teens – collegiate daughter Bea (Geraldine Brooks) and a younger son David – and currently trying to keep their suburban California house together while her husband’s on a business trip in Germany.  At the start of the film, “keeping the house together” involves her making a secret solo trip to Los Angeles to tell a sleezeball named Darby that he’d better break up with Bea, or else.  Darby says he’ll only do so for cash; and Lucia walks out, thinking that surely all she’ll have to do is tell Bea about that and she’ll see sense.  The besotted Bea secretly meets with Darby in the family boathouse that night, hoping to clear things up; but when Darby confirms what he said, Bea is angry enough to wallop him with the flashlight she’s carrying before running into the house and into Lucia’s arms, begging forgiveness and promising it’s over.  Yay, crisis averted!

Except – when Lucia takes an early walk on the beach, she finds Darby’s corpse. It seems that while he was staggering around after his clonk on the head, Darby fell off the boathouse balcony, landing directly on the anchor from brother David’s motorboat.  In a panic, Lucia loads the body into the motorboat and dumps both body and anchor in a nearby swamp.  Yay, crisis averted again!….Except a day or so later, the police find the body.  And that evening, a stranger named Donnelly (James Mason) turns up with a bundle of letters that Bea had written to Darby, threatening to turn them over to the police unless Lucia pays up. 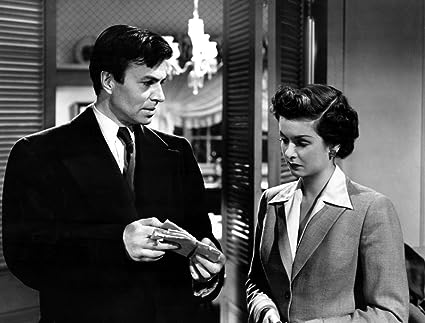 I thought Bennett’s take on Lucia was strangely cold at first; all she says in the face of Bea’s sobbing apology is a brusque “it’s all over now” and urging her to go get some sleep, with just a little pat on the shoulder instead of a comforting mom-hug.  She’s something of a nag to son David, and just seemed strangely brittle.  But as the film went on, I realized that what I was taking for coldness was actually a 1950s housewife grit-teeth determination that “I HAVE EVERYTHING UNDER CONTROL AND THINGS ARE JUST FINE.”  She’s not cold, she’s just overwhelmed, and at the same time she is determined to pretend that everything’s fine and to try to handle everything herself.  Even in the few times she speaks with her husband she keeps things from him – in an early scene when she is writing to him, she starts to complain that she misses having him on hand as a source of advice, but then crumples up that entire page of the letter and writes a more generic “I miss you, darling” missive.  The two times her husband calls home, the biggest crisis she shares with him is a difference of opinion about the family Christmas tree.  She will handle everything else on her own, dammit.

That also informs a lot of her meetings with Donnelly.  As the film goes on, Donnelly develops a sweet spot for Lucia, gradually thinking of bigger and bigger ideas to spare her from blackmail and protect her family. Lucia also softens towards Donnelly a bit over time.  It’s clear that Donnelly is developing a crush (the one thing in the film I didn’t buy), but while other critics see Lucia as reciprocating that crush, I think it’s more gratitude; Lucia wants to protect her family, and if being nice to Donnelly will help, then so be it. And Donnelly is helping, at a time when she most needs help.  And thank God, he’s also being discreet about everything!

Director Max Ophüls uses a lot of long, sweeping tracking shots to follow Lucia as she scurries around trying to juggle everything; trying to keep David tucked in his room and her live-in father-in-law stowed in the den while she speaks to Donnelly in the kitchen, or running out of change during a call at a payphone and having to run out to Donnelly to bum a quarter.  It’s like watching a juggler with a bunch of spinning plates or watching a rat trying to navigate a maze, and just emphasizes that Lucia’s insistence that things are fine is all a performative front.

Apparently this had a bit of a 2001 remake with Tilda Swinton; both this film and 2001’s The Deep End draw from the same source novel.