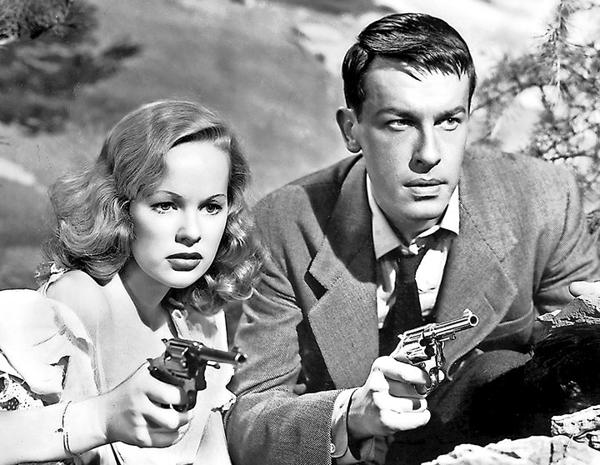 As the roommate observed when I was midway through this film – “if a film is called something like Gun Crazy and you’re still falling asleep in the middle of it, that’s telling.”

In the film’s defense, I’ve had a few rough nights’ sleep. But this also seemed to be a weirdly bloodless noir, in the way that things can sometimes feel if they try a little too hard and fall short.  In this case there is a lot of emphasis put on how the main character Bart (John Dall) is a good guy, really.  We open with a longish courtroom scene with Bart as a kid, where he’s on trial for trying to steal a gun out of a sports goods shop window. But the scene is meant to underscore Bart’s inherent goodness – family and friends all serve as character witnesses with tales about how Bart may be really into guns, but he shies away from using them to kill anything.  Nevertheless, the judge still sends him off to reform school, pointing out that Bart is still a little overly-obsessed with guns.

The grown Bart is still a gun fan as an adult, and is still just as committed to non-violence. He’d been in the Army for a while, but it didn’t take; he didn’t want to kill anyone, and teaching other guys to shoot got dull.  So he came home, hoping to spin his marksmanship into a career; maybe as a tester or a salesman for Remington rifle company or something. By chance he ends up at a carnival sideshow with a lady marksman, Annie (Peggy Cummins), and Bart takes the ringmaster up on a challenge to try out-shooting her.  Of course he wins, earning a job with the carnival and the attention of the pretty Annie.

But it’s not until the jealous ringmaster fires them both a couple weeks later that Bart learns that Annie may share his skill as a marksman – but not his moral compass.  “I want things,” Annie complains.  “A lot of things, big things. I don’t want to be afraid of life or anything else. I want a guy with spirit and guts!” And the way to get these things, Annie argues, is through theft – holding up small banks and drug stores and living on the run.  Bart reluctantly goes along, telling himself he can keep Annie from killing anyone in the process.  They tire of their spree after only a few months and agree to one last big heist before retiring to Mexico – but Annie shoots a couple bystanders, adding murder to their docket and sending them both on a run for their lives. 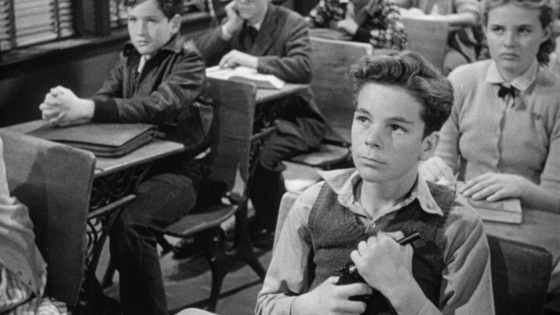 I’ve read that the scriptwriters behind Bonnie and Clyde watched this for research. It’ll be interesting to compare to that film down the road; right now, though, it felt a little closer to the camp anti-drug film Reefer Madness (the judge in the early courtroom speech in particular had a “guns are bad, m’kay?” vibe).  I also didn’t really see any of the luridly sexual tone that other reviews swear this film has – possibly because others say that it’s Peggy who’s bringing the sex appeal, and she’s not my flavor of eye candy to begin with.  Bart, meanwhile, is presented as super-squeaky-clean almost to the point of absurdity – the catalyst they show for his non-violence is a moment from when he was just a little boy fooling around with a BB Gun and accidentally killed a wee fuzzy chick in his family’s henhouse.  (There are a few shots of the dead chick lying on the ground, fair warning; interspersed with the boy version of Bart crying bitterly.)  The subtext for the film isn’t that guns ruined Bart’s life – it’s sex. And I’m not that crazy about that.

One scene in particular stands out for its technique. About midway through the film, there is a scene where we watch Bart and Annie drive to a bank, and then Annie watches the car while Bart heads inside to pull off a heist; when he’s done, they make their escape.  The whole thing is filmed as one single unbroken shot – and the director had the idea to somehow try to film this as if the camera were in the back seat.  Today that’s not an unusual shot – but it was somewhat new territory for 1949.  The only way they could figure out how to do it was to get a stretch limousine and remove all of the seats except for the two front seats, and then stick a cameraman in the car behind the actors.  It was a simple solution which worked surprisingly well.  …However, they also chose to have Cummins and Dall improvise all their dialogue in the scene – and most of it was a pretty mundane discussion about street directions and parking, which ended up detracting from the novelty for me.