As it turns out, this film can be paired with Nanook Of The North to serve as the bookends for a career.  Nanook was the debut film for director Richard Flaherty; Louisiana Story was his last film.  …That being the case, I wish I were a little more impressed with it.

Much as he did for Nanook – and for all his “documentaries”, to be frank – Flaherty directed more of a docu-drama, writing up a sort of “script” with various “typical scenarios” in it, and then casting non-actors to act them out. Here he turns his attention to a rural Cajun family in Louisiana, where he focuses mainly on a boy of about ten who lives in a cabin in the bayous with his parents and a pet raccoon that he paddles around with on his pirogue, fishing and exploring and trying to trap an alligator.  Early on in the film, his father sells an oil company the drilling rights to a portion of their property, and on occasion the oil workers and the boy swap fishing tips. 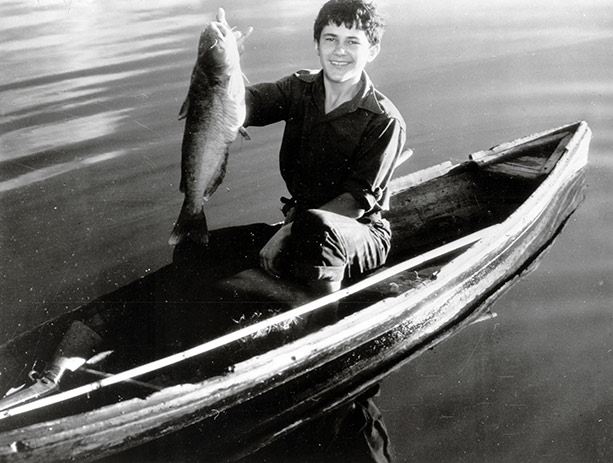 It’s the same model as Nanook of the North, actually – “show people going about their business”.  In Nanook there are sequences with seal hunts and spearfishing; here we see a sequence with the boy struggling to land an alligator.  In Nanook, the children play with sled dogs and are fascinated by other Arctic animals; in Louisiana Story, the boy plays with his raccoon and is fascinated by watching an alligator hatch.  Nanook has a “comedy” bit where Nanook shows himself to be unfamiliar with a phonograph; Louisiana Story has a “comedy” bit where the boy amuses the oil riggers with some folkloric tips for fishing, and takes them seriously when they joke that he should do the same for their oil rig.  With this film, it didn’t seem as fascinating; possibly because moviemaking itself is two decades older, or possibly because Cajun country is not as dis-similar.

There’s also a whiff of propaganda to the film as well; and no surprise, as the Standard Oil company commissioned the film to promote its Louisiana drilling ventures. Not a whole heck of a lot happens with that either; other than the friendly banter between the boy and the riggers, and another scene where the boy and his father show off the skin of an alligator they’ve caught, we don’t see much of them. There’s a sequence with the oil drill striking a gas pocket and nearly causing an accident, but it seems to get fixed up awfully quick (and largely off-camera), with absolutely no environmental impact.  There’s also a scene towards the end with the father bringing home some new household items for the mother, presumably using proceeds from the drilling crew.

So I don’t really know whether it was the propagandizing or the film itself that made this feel like a non-event, and why it didn’t grab me as much as Nanook did.  Maybe I’ve changed a bit as well since watching that earlier film.

This being a Louisiana story, I’ll leave you with a lagniappe – a recent interview with Joseph Boudreaux, who was cast as the Boy in this film.