Alright, let’s all just say this once together and get it out of our system, shall we? That one line (which is a misquote) was one the very few things I knew about this film. I had a vague idea it was a Western-y thing, that Humphrey Bogart was in it, that was about it.  I went into this pretty blind.  And boy am I glad I did, because what a fabulous surprise this turned out to be.  I had the idea this was a sort of Wild-West thing with Humphrey Bogart as the hero, set during ye olden frontier days or something. But instead, this was a gripping tale of greed and corruption set just before the Great Depression, and Humphrey Bogart is instead a major anti-hero.  As he famously quipped to a movie critic while they were filming – “I play the worst shit you ever saw!”

He’s not that bad at first. Bogart is “Fred Dobbs”, a drifter bumming around a Mexican oil town panhandling from other norte-americanos and doing odd jobs.  At some point he’s thrown together with another such drifter, Bob Curtin (Tim Holt), and they end up going in on a night for them both in a flophouse, where they meet Howard (Walter Huston, father of the director John). Howard’s regaling everyone with stories of his gold prospecting days, seasoning his tall tales with a frank confession that he quit gold mining because the greed was getting to him.  Curtin’s bemused at Howard’s stories, but Dobbs is…inspired.  So much so that when Curtin and Dobbs have a sudden windfall, they seek out Howard and talk him into leading them on one more prospecting expedition. 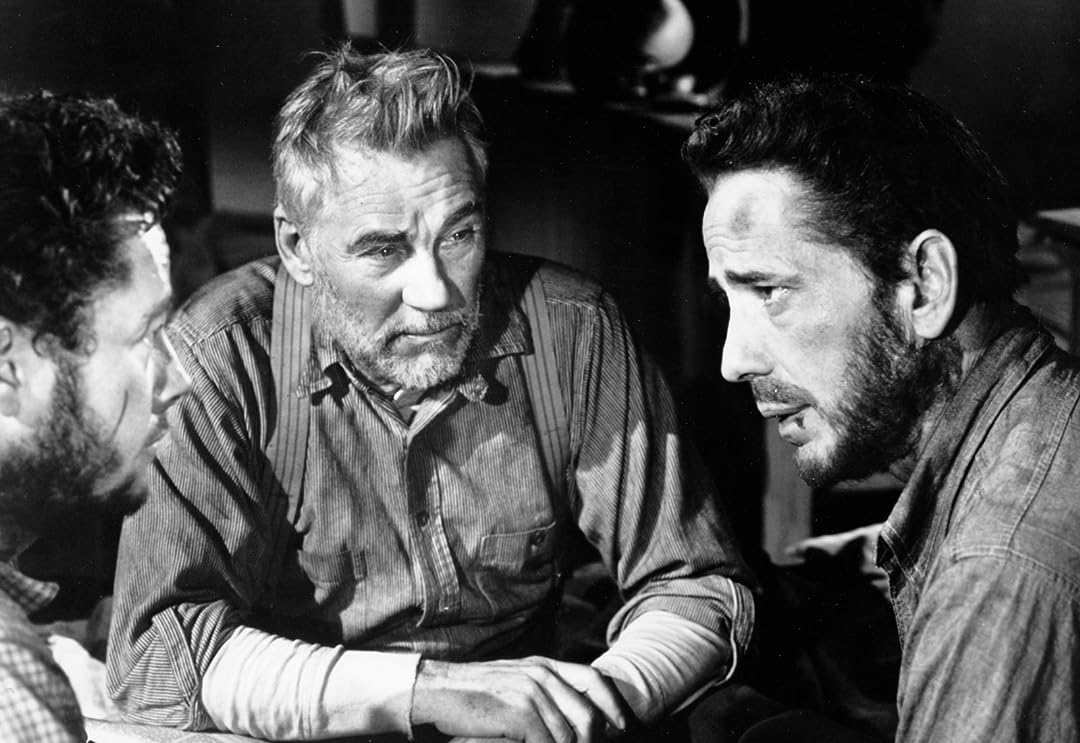 After an exhausting few days of backcountry hiking – exhausting for Curtain and Dobbs, at least – Howard declares they’ve found the right spot, high in the Sierra Madre mountains.  Dobbs and Curtain are dubious – but after Howard gives them a quick gold-panning lesson, one which has yielded them a couple hundred dollars for short work, the other men are sold.  It’s not as easy as Dobbs and Curtain thought, maybe; they still have to dig and pan and put their backs into it, and they still have to camp out in the wilderness two days’ hike outside of civilization, but within a few months they’ve accumulated a small fortune.

Except as the money piles up….Dobbs starts to get greedy.  And his greed makes him paranoid; first he insists on splitting the haul up three ways each day, and making every man responsible for his own stash – so he can hide his from the others.  Then he starts to second-guess Curtain or Howards motivations for anything they do or anywhere they go.  He gets dangerously aggressive towards any strangers who come near their camp.  And in time, his aggression starts to turn towards his comrades.

I was riveted.  This story isn’t so much about the gold and the thrilling adventure of finding it, so much as it’s about how jealousy and paranoia blow the whole thing apart, especially how it drives Dobbs completely bats towards the end of the film.  But it’s not an over-the-top mad scene – it’s been a long gradual slide, and one we’ve absolutely seen coming.  It’s also one Howard and Curtin have seen coming as well; for most of the film, Howard’s not so much teaching his fellows about prospecting so much as he’s babysitting Dobbs.  But at one point he’s called away – and finds an alternative life to pursue after prospecting – and that leaves Dobbs free to tip the whole situation over into chaos, leaving him pacing in circles in a jungle in one scene and arguing with himself about bandits, vultures, and tigers and ranting about whether it makes sense to have a conscience.

Everyone meets an unfortunate end; but only in one case is it a tragic one.  For the others it’s transformative, and even a little hopeful.  In a way, that was disappointing – it just felt like things were being tied up in a neat bow.  I’d almost preferred the film had ended just two minutes sooner – with two of the characters realizing that everything they’d tried to do had just collapsed around them, and all they could do was look at each other and laugh in the middle of the mayhem.

….Not bad for a film about “steenking badges”, eh?