Usually after watching a film, and before writing my review, I browse through other reviews to kind of whet the grindstone a little.  Not that I’m necessarily looking for guidance about what to say; more like, if I read something and think “huh, that’s an interesting idea” or “what, that’s nonsense”, that usually gives me a place to start.  If I have a violent opposition to someone else’s review, all the better. For Hitchcock’s Rope, what I noticed from the reviews was fairly interesting – they all seemed to focus on the aspect of the film I personally was least interested in remarking on.

I am indeed talking about how it looks like it’s all been filmed in one continuous take. It’s an interesting gimmick, sure. Hitchcock was inspired by a play about a murder, and how the whole story playing out in “real time” amped up the suspense; in translating that to film, he came up with a way to make it look like the whole thing was in a single take, using a specially designed set that allowed the camera crew to roll walls aside if they needed to move the camera more smoothly, or designing whisper-quiet motors to run lights.  The roommate told me there were also crew members on standby to sweep in and catch any errant props that may have been about to fall over so the noise wouldn’t disrupt a take.  (He also told me that one of the cameras accidentally rolled over one stagehand’s foot and broke it, and three other stagehands all frantically covered his mouth and dragged him offset before he screamed.)

The reviews who don’t mention that deal with how the story owes its inspiration to an actual crime committed by Nathan Leopold and Richard Loeb, a pair of wealthy teens, in 1929.  Like Leopold and Loeb, our leads Brandon Shaw (John Dall) and Philip Morgan (Farley Granger) believe that they are intellectual superiors to nearly everyone else, and this superiority gives them license to commit murder.  And they’re doing precisely that at the top of the film – strangling a school chum named David with a rope and stuffing his corpse in a big trunk in David’s apartment. They need to wait until dark before stashing the body, and Brandon’s decided to secretly gloat a bit by hosting a cocktail party for David’s parents, girlfriend, and best friend, as well as Rupert Cadell (Jimmy Stewart), their house master at their old prep school.  Rupert had discussed the idea of Nietzche’s “superman” with them back in the day; and once, for kicks, shared with them a satirical essay on how murder could be considered an art.  But for Rupert, these chats were just an intellectual exercise; it seems that Brandon took them a little more seriously.  In fact, just before the guests arrive, Brandon spontaneously decides to move the table setting from the dining room to the the chest hiding David’s body.  That’s where Philip quietly starts to freak out – just minutes before the first guests arrive.

Now, both of those elements of the film are things you may have heard of before.  I know I did, and I’d never even seen the film.  The one-take stuff was fun to see; and there was one moment that was surprisingly tense, towards the end when a maid is slowly and methodically starting to clear the dinner dishes and then the table linens off the chest, then gradually bringing stacks of books back in from the next room, preparing to stow them back into the chest; we’re listening to the other characters speak, but what we see is the maid at work, moving from the chest to the kitchen, then back, where she grabs a dish or two, walks back to the kitchen, then comes back, and…and the whole time I was on tenterhooks wondering “are you going to open the trunk or what now???”  But otherwise, the one-take angle came off as more of a clever stunt.  Effective and impressive, but still a stunt where I could see the mechanics.

Instead, I was way more fascinated with simply watching Dall as Brandon. I don’t know enough about the Leopold and Loeb case; but here, Brandon is presented as the ringleader who’s talked Philip into going along with him.  He’s charming and suave, and perfectly poised for much of the film – as opposed to Philip, who’s nervous and edgy and who gradually falls apart.  But Brandon seems to have one tiny weakness – he’s desperate for Rupert’s approval, and just can’t help steering the conversation around to things Rupert had said in the past about murder and art.  Clearly it’d be foolish for him to tell Rupert what they’ve done, but….deep down he wants Rupert to know, and despite himself, starts dropping bigger and bigger hints.  But Rupert’s no slouch, and suspects something’s up early in the evening – and has decided to play it cool, spurring Brandon to show his hand more and more. 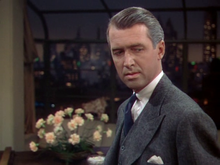 Apparently, in the original play, there was some heavy insinuation that Rupert, Brandon, and Philip had all been each other’s lovers at one point (and that Brandon and Philip were still kind of involved). But this read much more like a child trying to seek approval from a teacher he admired, and the teacher just hanging back knowing that the child was going to spill his guts sooner or later.  Stewart and Dall are both remarkably subtle here; Dall never goes totally obvious with his hints, and we never see more than the slightest ripple in his calm.  And Stewart never gets histrionic about his suspicions until the very end; but much earlier, there’s a moment when Stewart is listening to Dall as Brandon talking about David, and the camera is focused on him listening with a thoughtful smile. He never breaks that smile – but at some point, as he listens, we can tell the exact moment when he realizes what happened.

So see Rope for the technical expertise if you like, but don’t forget to watch for what I found to be a tour de force performance from a pair of actors.