Thus quipped the roommate when this film ended: “I bet a young Ken Kesey saw this.”  He was thinking – as was I – of Kesey’s book One Flew Over The Cuckoo’s Nest, which has a very similar perspective to The Snake Pit in some sequences.

It’s not an exact parallel, however. Olivia de Havilland stars as “Virginia Cunningham”, although she seems a bit confused about the “Cunningham” part at first.  She’s pretty confused in general, in fact – we meet Virginia sitting on a park bench and looking a bit rumpled, hearing a disembodied male voice asking her questions.  She looks about her and sees no man – only a similarly-disheveled woman sitting beside her, and other women – some nurses –  milling about in the yard of what looks like a prison. She is surprised when the woman beside her starts leading her into the prison and is even more surprised that everyone treats her like she’s already been there a while. 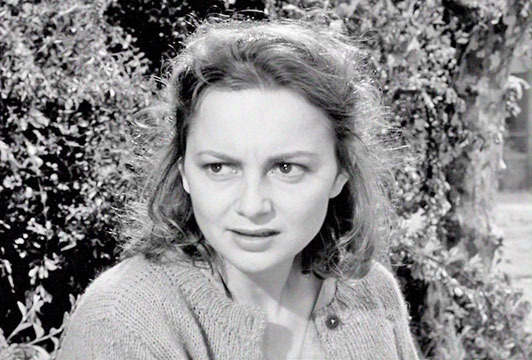 For Virginia is indeed an inmate – but an inmate in a mental institution, with no clear memory of how she got there.  The last thing she remembers is living in an apartment in New York and working on a writing career.  Vaguely she remembers living in Chicago before then.  She remembers nothing of being married (and doesn’t recognize her husband during an early visit he makes), nothing about what brought her to the institution, and nothing about why the date “May 12th” seems to send her into a panic.  The only thing that seems to be cutting through her confusion is the care of her doctor, a psychiatrist who simplifies his mouthful of a name as “Dr. Kik” (Leo Genn).   Everything else around Virginia is a confusion of militant nurses, erratically-behaving fellow patients, arbitrary rules and scary electroshock therapy – but Dr. Kik is kind to her and patiently keeps reminding her that he is there to help her get better.

…So, yes, we do finally find out what’s behind Virginia’s illness.  Dr. Kik seems almost singularly dedicated to helping Virginia – he intercedes to cancel her electroshock therapy early when it seems to do more harm than good, he patiently makes himself available for consultations at all hours (even at about 3 a.m.), he uses drug therapy and hypnotherapy and Freudian talk therapy and any one of a number of treatments to draw Virginia out.  As I watched it did feel like Dr. Kik was a stereotypical “Hero Doctor” (there’s even a scene when some of the other doctors call him on his behavior, pointing out that they have hundreds of other patients, so why focus on this one), but in retrospect, this film is largely from Virginia’s perspective, and her doctor would indeed loom large in her mind.  And the “reason” for Virginia’s illness isn’t all that interesting at the end of the day anyway. The movie draws the mystery out, gradually unwrapping all the layers only to uncover a somewhat routine incident from Virginia’s childhood.  Dr. Kik is a Freudian by trade, so that is held up as the be-all and end-all of Virginia’s issues, but it felt a bit simplistic.

What’s more interesting – or at least more attention-getting – are the “life on the ward” moments when Virginia is interacting with all the various nurses and the other patients.  There are cruel nurses and kind ones; there are lucid patients and delirious ones. There’s even a nurse who becomes a patient.  There’s a pecking order between the different wards in the hospital, and your ward number says much about where you are in your illness and how you are treated; the patients in Ward One are nearly cured and enjoy private rooms (provided they can keep up with the ward nurse’s standards of tidiness), while the patients in Ward 33 are considered the sickest, and are left to meander around in a cavernous basement room as they babble and rave. 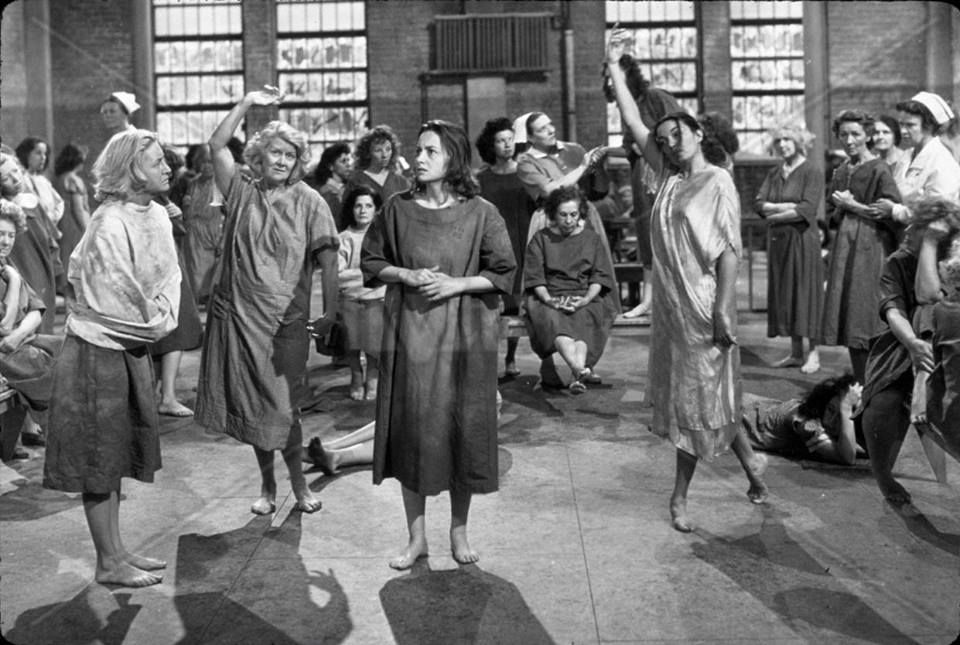 Ward 33 is the “Snake Pit” of the title – ironically, Virginia’s visit there is something of a turning point, as she not only starts to get a firm grip on her mental state during her stay there, but is able to reach out to another Ward 33 resident with kindness, drawing her out of her own illness.

The film was based on a semi-autobiographical novel by novelist Mary Jane Ward, who had once spent time in an institution after a mistaken diagnosis of schizophrenia.  Ward based a lot of the accounts of treatment in the novel on her own experience; director Anatole Litvak spent an additional several months studying psychiatric treatments, the culture of mental institutions, and various types of illness and their symptoms.  Where possible, he brought the rest of the cast and crew along with him.  Olivia de Havilland did a good deal of her own research as well – so much so that when one critic was skeptical about a particular scene in the film, de Havilland was able to call her and present several examples of that very event happening.

The research seems to have especially paid off with the actresses playing the various patients. There are a wide range of symptoms on display, from catatonia to aggression to delusion to erratic memory to erratic behavior to obsession to… There’s even a realness to the “patient culture” among the inmates, with cigarettes being used as currency and emptied-out chocolate boxes being used as purses (we first see Virginia with one, and then I started seeing it among other patients).  Apparently the actresses playing patients sold their parts so well that theaters in the United Kingdom saw fit to preface all screenings with a disclaimer to squelch a rumor that the film had used actual mental patients as extras.  To be fair, the behaviors they were displaying had never really been depicted in any film about “mental illness” before, and it all came as something of a shock to contemporary audiences.  ….For my part, though, I watched the scenes in Ward 33 with an internal chuckle that “man, how much fun must that have been to perform?”