Before I begin, would you all please indulge me in something I need to get off my chest?

GREAT HOLY BONGO NUTS WITH A DACHSHUND IN A LOBSTER BIB ORSON WELLES’ IRISH ACCENT IN THIS FILM IS TERRIBLE OW MY EARS.

This feels like it could have been a decent little noir. Welles is “Mike O’Hara,” a sailor and would-be writer who comes to the rescue of a beautiful stranger in Central Park, interrupting a gang of thugs trying to mug her. The grateful Elsa (Rita Hayworth) lets Mike bring her home; they flirt up a storm on the way, but then Mike learns she’s married to a wealthy lawyer and backs off. But Elsa’s not that easily snubbed; she sends her husband Arthur (Everett Sloane) to hire Mike as a bo’sun on their private yacht, for an upcoming cruise from New York to San Francisco. 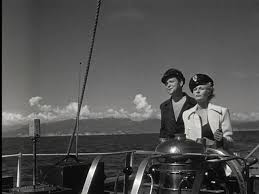 Arthur’s business partner George Grisby (Glenn Anders) meets them in the Caribbean, and at first grates on Mike’s nerves by teasing him over his obvious attraction to Elsa. But then he takes Mike aside for a proposal – George says he wants Mike to kill him.  Or….at least make it look like that. George can pay Mike handsomely, he says – enough to run away with Elsa, anyway.  Mike is initially horrified, but the more the trip goes on, the more enamored he becomes of Elsa – and the better George’s proposal starts to look.  However, the more the trip goes on, the more it also looks like Elsa or Arthur might be in on the plot with George.  Unless they’re plotting against each other.  Or all three are plotting against each other.  But how?…

I admit that I still am not entirely sure exactly how the conspiracy in question ultimately played out.  There was just a lot of double- and triple-crossing and moving parts, and ultimately I got a bit lost. Rita Hayworth is lovely as the mysterious Elsa, and I found myself torn between wanting to mock George or punch him; he has a delightfully bonkers reason for wanting Mike to kill him at first.

As for Welles….he sets up some beautiful-looking shots, but ultimately his own performance is a little….mediocre (except that blasted accent). His screenplay also let him indulge in some fairly pretentious monologues about how corrupt and wicked Elsa and Arthur are; a position Mike has entirely due to class and money.  Nothing Mike says is anything I haven’t heard outside of an Occupy Wall Street rally, and the pace of the film grinds to a halt whenever Mike stops to lecture someone.

There’s also a sequence towards the end that is symbolic to the point of being borderline silly; a showdown in a funhouse hall of mirrors. This movie is actually the source of that trope where one person is stalking another in such a hall of mirrors, mistaking a reflection for the real person and shattering the mirror.  Before that showdown, though, Mike stumbled about through the funhouse his voiceover discusses how he’s been lead along by Elsa and Arthur, fallen for their toying with him, and tossed about in a shifting story – and just from my saying those things, you can guess what bits of the funhouse Mike is stumbling through as he speaks, can’t you?  The last bit with the hall of mirrors was clever, but the rest was way too on-the-nose.

Ultimately it came across like it started as a noir but Welles wanted it to make more of A Statement, and piled on the Things He Wanted To Say but then it collapsed under the extra weight Welles was putting on it.