I discussed this a bit with the roommate before firing it up. I mentioned that this may be my only in-list exposure to Bob Hope; for me, having grown up in the 1970s and 80s, Bob Hope was one of a cluster of old-fashioned comedians who had occasional variety show specials or made guest appearances on talk shows now and then.  Hope was a sort of “perpetual Oscar Awards host” in my head as a child, before he was replaced by Johnny Carson.

We were both surprised that The List didn’t include any of the Road To {etc.} movies he did with Bing Crosby, and which to my understanding are the films for which he’s best known for.  Instead, I got this – a Western-themed comedy matching him up with Jane Russell.  Russell plays a fictionalized version of Calamity Jane, who’s cooling her heels in a prison at the top of the film; she’s sprung from jail and secretly brought to the governor’s office, where he offers her a full pardon if she does a bit of espionage. It seems that someone has been smuggling guns to the Indians near a frontier outpost, and the governor has a tip that they’ll be joining a wagon train headed thither to make another dropoff.  Jane is to meet up with another agent so they can join the train posing as husband and wife and secretly flush out the smugglers.

But Jane discovers her contact has been killed just before their meeting – and there are some shady characters on her tail.  She ducks into the frontier office of “Painless” Potter (Hope), a quack dentist, hoping to shake her stalkers.  Potter’s a dud of a dentist – the whole time that Jane is trying to evade capture, Potter is making complete hash of a tooth extraction, and conveniently closes up shop to skip town right when Jane needs to make her own escape.  So she stows away on Potter’s wagon, waiting until they are safely out of town to reveal herself.  Jane quickly sizes Potter up as a cowardly buffoon – but she needs a cover story to join the wagon train, and Potter has a wagon and he seems smitten with her.  So…maybe she can use him instead?

The rest of the film is a bouquet of schtick involving chuck wagons, Indians, saloon visits and shootouts, with Jane inexplicably growing fond of the ridiculous Potter.  Intellectually, I could recognize and respect Bob Hope as a talent – but honestly, while he’s performing well, none of the gags he was performing were doing anything for me.  It all seemed the same kind of hokey stuff I’d recognized from his Oscar host gigs, and my reaction was just a sort of shrug and yawn.  Some of their depictions of Indians, too, are kinda cringey. 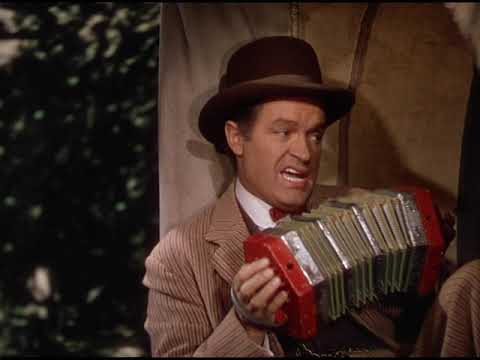 There was one sweet little element, though – a song, “Buttons and Bows”, which Potter serenades Jane with at one point as they travel.  It’s not the most “woke” song, I’ll admit – the lyrics are all about wanting to abandon the frontier and move back to where women can indulge in more feminine dress and habits.  But there’s something charmingly catchy about it, to the point that I’ve still got it in my head twelve hours later.  Critics of the time seemed to agree – I’ve just read the original New York Times review of the film, which largely sneers at the whole film but then adds “and yet there’s this lovely little song….” in the last paragraph.  “Buttons and Bows” went on to win the Academy Award for Best Song that year to boot.