Spring In A Small Town came out at a weird point in Chinese filmmaking history.  It was just after World War II – which itself had been folded into the much lengthier Sino-Japanese War – but was just before Mao Zedong’s ultimate victory in the Communist Revolution.  One of the Chinese Communist Party’s acts upon their victory was a sort of reckoning of all the entertainment that had recently come out; anything that lacked a sufficiently leftist political stance got dismissed as rightist or reactionary, and was shunned by the new government.  So this film, among many others, got shelved for decades.

Even though you’d be hard-pressed, frankly, to find any political message in this film, aside from “war is bad”.  It’s a much simpler tale of a love triangle between Dai Liyan (Yu Shi (石羽)), a youngish man living in a small town in Eastern China, Liyan’s wife Zhou Yuwen (Wei Wei (韋偉)), and Zhang Zhichen (Li Wei), an old friend who comes to pay a visit.  For the past several years Yuwen and Liyan’s marriage has been rocky; the war has largely wiped out Liyan’s family fortune, and he hasn’t really recovered from the loss emotionally; he spends most of his days moping in the ruins of the main house, suffering from an illness which is likely psychosomatic, while Yuwen patiently tends to both him and his spunky teenage sister Dai Xiu (Zhang Hongmei). Yuwen has long since fallen out of love with Liyan – if she ever did love him – and is only sticking around out of a sense of duty.

Liyan does perk up when his old school friend Zhichen comes to town.  The pair were thick as thieves back in the day, and Zhichen reminds Liyan of happier times and invites him to stay a while. He wouldn’t believe how big Dai Xiu has gotten, remember she was only six last time you saw her?  Oh, and you have to meet my wife Yuwen….

…Except Yuwen and Zhichen already have met.  Ten years ago.  When they broke up right before Yuwen married Liyan.

That simmering tension drives the rest of the plot. Yuwen and Zhichen had had a passionate romance, and some of the sparks are definitely still there. But some of the present fire could also be driven by Yuwen’s general hunger for male attention – or even for any kind of novelty, as there’s very little to do in their village side from stroll along the old city wall. Yuwen and Zhichen stroll there a time or two, discussing the question of “what the hell do we do”, and Yuwen tries several of her own ideas to defuse what’s becoming a time bomb – including trying to throw the barely-legal Dai Xiu at Zhichen.  Things finally come to something of a head at Dai Xiu’s sixteenth birthday party, which the family celebrates with a series of silly games – and Yuwen gets herself really, really drunk, to the point that her simmering feelings for Zhichen get a little bit more obvious. 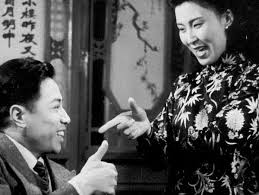 ….For me, I have to admit, this wasn’t always a captivating film to watch. It’s slow and plodding in its pace, it rarely ventures out of the house and garden that have become Yuwen’s world, and it really draws out the tension of the love triangle. But that all may of course have been intentional – as monotonous as life with Liyan seemed to me, it must have seemed doubly so for Yuwen, which may have been precisely the point.

There are also some beautifully composed shots – one long shot from one of Yuwen and Zhichen’s walks simply shows them walking down a path away from the camera, each primly sticking to opposite sides of the path. And ever-so-gradually, Yuwen’s steps edge closer and closer to Zhichen’s, until she is walking close enough beside him to hold his hand – which she does for just a second or two, before veering back to her side of the path again.  It was simple, it was wordless, it said so much.

Speaking of saying things – one nit I will pick is that the film frequently has Yuwen narrating some of the scenes.  Either she’s describing the ongoing action, or she’s discussing her inner thoughts.  I really didn’t need to hear it, as the wordless performances were often more telling.  Spring in A Small Town was ultimately re-discovered in recent years, and enjoyed a remake in 2002 – and cutting the narration was one of the few changes the remake made.