I’ve been largely lukewarm on Westerns. That wasn’t a period in our country’s history that ever grabbed my interest, and a lot of the Westerns that crossed my path seemed to be pretty cliché-driven and all seemed to have a lot of the same details. (New roommate came home from a trip in the middle of this film and went directly to his room to unpack; later he correctly guessed that I had watched a John Wayne Western, and told me that he could tell what I was watching just from overhearing the score.)  Red River, however, had a couple of surprises in store for me.

The film does indeed star John Wayne, as “Thomas Dunson”, who’s part of a wagon train to California at the top of the film. However, as the train is passing through Texas, Dunson’s eyeing the landscape and notices that “the land here seems pretty good, actually,” and announces he’s dropping out to start a ranch right there. His trail hand Mr. Groot (Walter Brennan) comes along, and they spot distant smoke as they make camp that first evening, and guess – correctly – that the wagon train has been surprised by an Indian attack.  But there was one survivor – Matthew Garth, a teenage boy who turns up in their camp the following morning, delirious from shock and leading a single cow.  Dunson calms him down and takes him in – all Dunson has is a bull, and with Garth’s cow, maybe they can get a jump on starting their own herd.

Fourteen years later, Dunson’s ranch, the “Red River D”, boasts ten thousand head of cattle on prime land near the Rio Grande. But times are still hard – Dunson has been selling cattle throughout the southeast, but the Reconstruction-era economy has tanked that market. Dunson gets the idea to drive the herd north to Missouri – a distance of several hundred miles through land crawling with Indians and other cattle rustlers.  If they make it, though, they stand to strike it rich.  Garth – now a strapping young man, played by Montgomery Clift – says he’s heard of a new stockyard in Abilene, Kansas, which would be closer; but Dunson dismisses this as rumor and rounds up a crew for the long drive north.

The trip is indeed just as dangerous as everyone fears, with the herd suffering from poor weather and a stampede that kills some of the men.  Food runs short and morale runs low.  And the closer they get, the more rumors they hear of a stockyard in Abilene – and the stricter Dunson gets with his discipline, whipping one man for stealing sugar and shooting two men trying to desert the team. Finally, the men have enough – and as Dunson prepares to hang a couple of deserters, Garth intercedes, injuring Dunson in the process. Garth takes control of the whole business, kicking Dunson out and announcing he’s going to head for Abilene; Dunson warns Garth that he’ll be coming after him for revenge.  The threat looms over the men as they travel on; Abilene may be closer, but it’s still some ways off, and they’ll be crossing through Apache territory on the way. And at any moment, Dunson could be coming up behind… 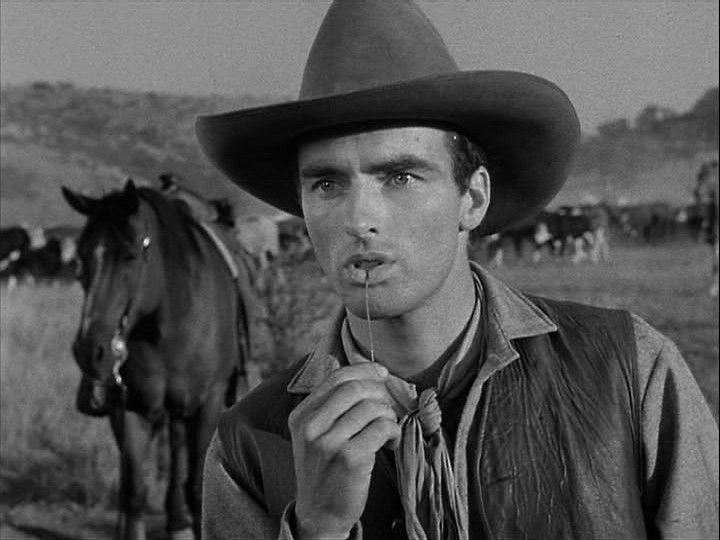 A lot of the tropes I’ve come to expect from Westerns were all here – the sweeping scenery, the folksy conversations around campfires, combat with various Native American nations, John Wayne looking grim.  The plot surprised me, though – it’s a sort of Mutiny On The Bounty on horseback, with Dunson going from being the square-jawed hero to being the Bad Guy.  I didn’t notice when I was watching, but another review I’ve read points out that Wayne’s costume even switches over the course of the film – he starts with a white hat, but towards the end, he sports a black one.  Garth is no impulsive Fletcher Christian tempted by ease, though – Garth may start out impulsive in his scenes as a kid, but Clift’s take on Garth is more measured; he knows what he’s talking about and he’s just as good a rancher as Dunson, he’s just more fair to the staff. Dunson sneeringly dismisses Garth as “soft” in one scene, but Garth’s approach seems more like good business management.  And he’s right about Abilene having a stockyard.

My favorite bit, though, came in the very last scene; I will get into spoilers a bit, so fair warning, but I loved it too much not to share…

While en route to Abilene, Garth’s team rescues a wagon train from an Apache attack, and earns the admiration of a woman named Tess (Joanne Dru). She wants to join Garth, but he turns her down.  Then Dunson and his posse meet up with them a few days later. Tess correctly guesses that Dunson is heading after Garth and convinces him to let her tag along, so she is on hand when Dunson reaches Abilene, and slips away to warn Garth.  And she’s also on hand when Garth and Dunson have their final showdown in the streets.

What I loved best, though, is that she is also on hand to defuse the showdown – by calling it out as the dick-measuring contest that it is.  She’s spoken to both Garth and Dunson over the past several days, she knows each others’ perspective of their disagreement.  She also has noticed that Dunson doesn’t seem willing to shoot to kill – he only aims between Garth’s feet, while Garth doesn’t even draw.  Soon Dunson gives up his gun and turns to fisticuffs. And after only a few minutes of watching them fight, Tess finally blows up, ranting at both Dunson and Garth that both of them are being completely stupid before storming off, leaving them both blinking in surprise, realizing that she’s right.

The short story on which this film was based ends very differently, and apparently the original author hated this ending – but I was delighted; the feud between Garth and Dunson is the kind of thing that could have been settled by simply talking to each other like grown-ups, and here was someone in the film demanding that they do exactly that.