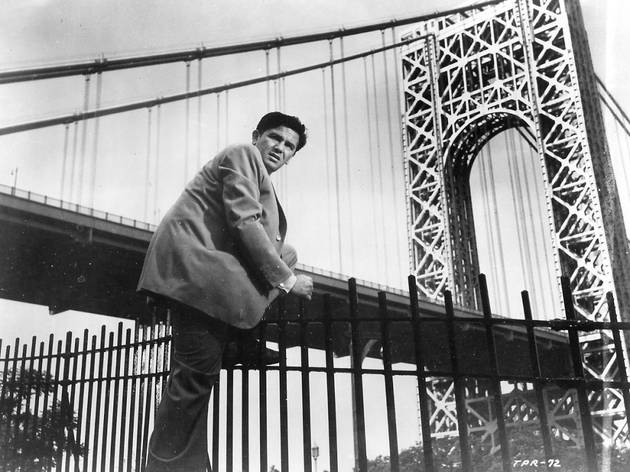 The new roommate watched this one with me, and when it finished I turned to him and quipped, “I didn’t know there was such a color as ‘infra-purple’.”

A number of the reviews I’ve read describe this as a “noir melodrama”, and boy is that accurate. John Garfield stars as “Joe Morse”, a lawyer who’s the go-to defense attorney for mob boss Ben Tucker (Roy Roberts). Morse is a little bit too chummy with his client, however; Tucker’s turf is running a numbers racket, and Morse is spearheading a campaign to legalize the numbers as a more traditional lottery, which would obviously work well for Tucker.  Behind the scenes, though, Morse is also teaming up with Tucker on a scheme to take over the smaller competing numbers banks – they know lots of players pick the number “776” on July 4th, so they’ll rig the game so that that’s the winning number, causing a run on all the smaller banks and driving them into bankruptcy.  At which point Tucker will swoop in and take over – just in time for Morse’s legalization campaign to pull through.

There’s just one problem – Morse’s brother Leo (Thomas Gomez) runs one such smaller bank. And Morse knows his big brother will want nothing to do with Tucker’s gang; Leo’s relationship with his baby brother Joe is already strained as it is.  Joe doesn’t want to give away the plan, but still makes repeated visits to Leo to warn him that….something’s gonna go down and maybe Leo should close up shop.  Joe also has his head turned by Leo’s pretty secretary Doris (Beatrice Pearson), and tries to do what he can to spare her as well.  Both Leo and Doris sense that Joe is bad news, and Joe’s struggles to win them over – while trying to keep his criminal dealings under wraps –  make up the bulk of the movie. 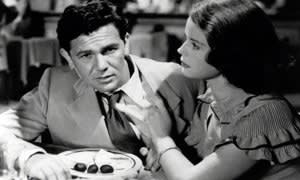 The plot description, as I read it on the DVD package, was intriguing and made this sound like a sort of 1940s version of Wall Street or Goodfellas.  Plus it was a fairly short 78 minutes.  However – then I started the film itself, and started hearing the dialogue.  Ye gods, the writing is overblown and histrionic and cliched and florid, and every one of those 78 minutes dragged.  Several of the reviews I’ve read have tried to spin the writing as being “poetic” and the whole film as a “Marxist allegory”; one review even insists that the whole thing is in blank verse.  ….Maybe it is.  But blank verse doesn’t always translate that well for the average-yutz viewer like me.

And it’s a shame, because there are some really artfully-done shots in this, like Morse turning up at his office after hours and being startled to see that there’s a sliver of light coming from under his office door. Then again, a climactic shootout towards the end of the film is a little messy and chaotic, to the point that it was hard to follow the action.  To a certain degree that’s intentional – the ultimate winner of the fight is supposed to be a surprise –  but I still wish I’d had a clearer idea of what actually happened in the fight itself.

This is another one of those films where the critics of today love it, but the audiences at the time hated it.  And I’m inclined to agree with the audiences.

(P.S. – I just realized I mentioned a “New Roommate” without clarifying that the magnificent Alex has moved to Los Angeles to seek his fortune in the screenwriting trade.  …Thank you, sir, and when I get to the Marvel films on the list I may want to pick your brain some.)