When I was about 40, someone got into my apartment through a faulty window lock and stole my laptop.  I actually might have surprised them in the act – they’d locked all the locks on the front door to my apartment, and my fumbling with the doorknob lock and the deadbolt and the chain in my efforts to get in were loud and lengthy, and when I finally got in I saw that all of the closets had been opened in both my room and my roommate’s room, and many other drawers and closets were standing open. But my laptop and my roommate’s were the only things we found were missing.  So likely they’d cased the joint, and were figuring out how to get everything out when I started fumbling with the lock and so they grabbed the two laptops and fled.

I was in a shaky financial place, so replacing the laptop itself would be a hardship.  But even worse – this happened before I’d gotten smart and started backing up my hard drive, so not only were they taking my computer, they had taken all of the data on it.  The first photos I ever had of my niece as a baby.  The first draft of a eulogy for my late cat.  Four short stories.  An essay I’d just started working on.  Ten years’ worth of writing, including all the drafts of two plays – gone.  The thieves didn’t know it, but they were taking far more than a laptop.  And it chilled me to know that not only would they never know – they wouldn’t even care.

Fortunately my parents gave me some help with a replacement, and some friends I’d asked to beta-read some of my writing all flooded me with the drafts I’d emailed them in hopes that they could help me restock.  My friend in Ireland even dug through all of our emails to find every single last photo I’d emailed her and sent it all back to me.  But even so the sheer helplessness and despair I felt took a while to fade.  I spent the entire next day prowling all the pawn shops near my neighborhood in hopes I’d find my computer, and thinking over and over – why had this happened?  Who could do this?  Didn’t they know the impact it would have? Didn’t they understand how personal this was, how much of me was tied up in that laptop?  How could I possibly recover from this loss?  Why me?

I thought of that a time or two while watching Bicycle Thieves.  Antonio (Lamberto Maggiorani) is an unemployed father in post-War Rome, and finally gets a job wheat-pasting movie posters around the city.  Having a bike is a requirement for the job, however, so Antonio can cover the most ground.  Antonio’s bicycle is in the pawnshop, but the money’s good and his family is desperate, so the family pawns their bedlinen to get his bike out of hock. Still they’re hopeful as Antonio rides off to his first day of work, dropping his eight-year-old son Bruno (Enzo Staiola) off at his own job on the way.  It’s fairly simple work, but pays well, and Antonio turns to it with a will and everything’s going great for the first couple hours, until the moment when Antonio is perched up on a ladder adjusting a poster and someone snatches the bike he’s left unlocked and unguarded.  Antonio tries to chase him, but he’s on foot and soon loses him. 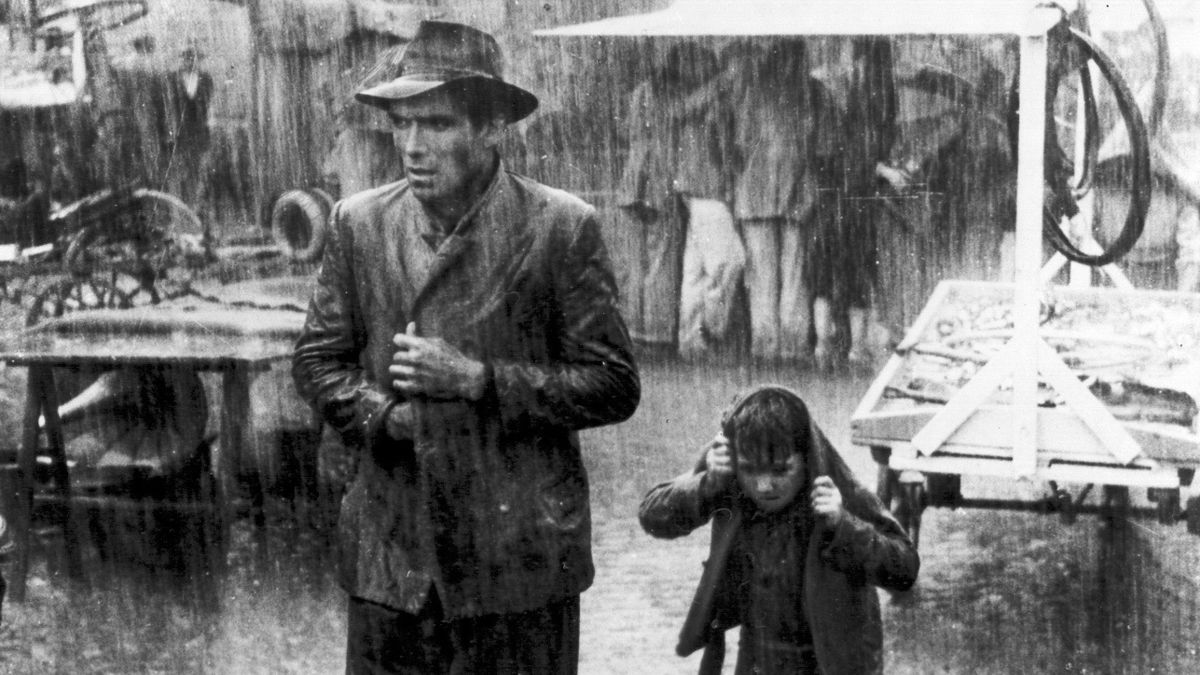 The next day – and the whole rest of the film – see Antonio and Bruno on a desperate search around Rome for his bicycle.  They search through two separate street markets, poring through both the fleets of bikes as well as the stalls selling just the tires or frames, in case it’s been chopped up. They think they see the crook twice and give chase again.  They see an old man that Antonio thinks the thief talked to, and follow him into a church, interrupting the mass to beg the man for help.  They even visit a psychic.  And at every turn they’re thwarted, either by misremembered serial numbers or a crowd of passersby who interfere or the indifference of the police.   And even when they do get close enough, the thief and his likely accomplice are also both clearly so poor that it’s likely that even if they were guilty, they’ve likely sold the bike for the money.  But Antonio doesn’t want the money – he wants everything made right.  He wants things back the way they were; he just wants his bike back.  Doesn’t the thief know what his bike means?  Doesn’t he care?

And yet, this neo-realist film also shows us the poverty that the thief also endures, which hints at his own motivation – and foreshadows a desperate move on Antonio’s part later.  No, the thief doesn’t care about Antonio – but that’s more because he has enough to worry about. 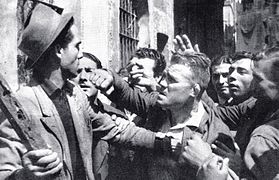 The performances that director Vittorio de Saca are near miraculous – since both his leads were completely untrained actors.  Lamberto Maggiorani was a factory worker de Saca cast as his lead, after spotting the man in the background of a photo someone sent de Saca for their own head shot.  And as for Bruno – Enzo Staiola was just a curious kid de Saco noticed hanging around their set one day watching the excitement.  But they both give utterly flawless performances.  Especially in what is probably my favorite scene – a moment when Antonio realizes that Bruno’s spirits are starting to sag and suggests they take a bit of a meal break.  The smile on Bruno’s face when Antonio asks if he wants pizza made my heart melt.

Bicycle Thieves is on many critics’ best-of-all-time lists. But its fame didn’t translate to fame for its leads, sadly; while the film was a smash success throughout the rest of the world, it was snubbed in Italy, where audiences were looking for more escapist fare (ironically, the posters Antonio puts up throughout Rome are for the movie Gilda).  Maggiorani planned only to take on this one role as a vacation from his factory work, using the proceeds to upgrade his furniture at home. But the factory soon had to lay people off, and Maggiorani was one of the first to go since everyone assumed he was now a “wealthy movie star”, and he was stuck with working odd jobs and the occasional bit part in films.  Enzo Staiola had a bit happier fate; after working in four more films, he grew up and out of his film career and went on to become a math teacher.   And he’s still alive today.  Here’s an interview I found where he recalls how he was cast.