As I’ve often said in here, I believe that sometimes how a person receives a film can depend strongly on what the person brings to the film – their personal history, their current mood, their religion or philosophical beliefs, their job history, a fight they got into with family, any number of things can affect how a person responds to a piece of art like a film; sometimes in unpredictable ways.  And sometimes, this unpredictable reaction is shared amid a whole audience; maybe there was a news story that is uncomfortably similar to events in the film, or maybe one of the stars of the film gets embroiled in some kind of scandal a week after the film opens.  Sometimes these issues aren’t under the artists’ control; sometimes, they kind of are.

Like with Chaplin’s Monsieur Verdoux. This black comedy about a “bluebeard” serial killer who woos and marries wealthy women and then kills them for the money was born in a discussion Orson Welles had with Chaplin back in 1941.  Back then it was going to be more of a docudrama about a real French serial killer, Henri Landru; it’s unclear whether they were going to collaborate or were just spitballing ideas.  But Chaplin thought enough of it to eventually buy the idea from Welles outright, giving Welles a story credit on the finished film.  But Chaplin made some great changes to the original idea – his Monsieur Verdoux still preys on widows and murders them for their money, but Chaplin uses the idea as a springboard for some of his own sociopolitical ideas, and bends over backwards to make us sympathize with his killer.  The actual Landru was a struggling furniture salesman, but Verdoux is a banker who’d lost his job in the Great Depression, and was forced into a life of crime to care for his family – especially for his quadriplegic wife.  At his actual trial, Landru professed innocence, refusing to answer any questions about his victims; but in Monsieur Verdoux, Chaplin’s Verdoux doesn’t deny anything.  Instead, he observes that all the world’s nations just finished killing people by the millions; and wasn’t that worse?  There is one implied murder in the film, but otherwise any of Verdoux’s murder attempts fall flat, and in one case the attempt is just a setup for some slapstick.  In another case, he even drops his plans when his victim turns out to be a war refugee. Audiences were likely expecting to see Chaplin in his “Little Tramp” persona, so this was all probably something of a shock. The film’s publicists tried to do what it could to nip that in the bud – a lot of the posters I’ve seen feature Chaplin as Monsieur Verdoux alongside a photo of his earlier “Tramp” character, with the slogan, “Chaplin can change – can you?” Chaplin certainly had the right to change, but there are some changes audiences may have found a bit too great to swallow; it’s one thing for a comedian to take on a serious role, it’s another for him to use that serious role to lecture audiences about the universality of the evils of war and the inherent evils of capitalism, which is how some of Chaplin’s script comes across.  Audiences didn’t want to be reminded of war casualties, and anyone that spoke ill of capitalism in the early days of the Cold War got a bit of a stink eye.  To add insult to injury, Chaplin also was caught up in a bit of a morals scandal – a couple years previously, the middle-aged Chaplin had married 18-year-old Oona O’Neill, Eugene O’Neill’s daughter, while at the same time was simultaneously caught up in a drawn-out paternity suit filed by another actress. A blood test had already cleared Chaplin in 1943, but at the time, blood tests were inadmissible as court evidence, and Chaplin’s former paramour was not willing to give up all that easily.

So audiences who weren’t already turned off by Chaplin’s war-crimes lectures and anti-Capitalist statements were probably kept away by the morals scandal, and Monsieur Verdoux didn’t really do all that well in theaters.  His film found some fans, however; journalist James Agee wrote three separate opinion pieces praising the film, pointing out that on one level Chaplin kinda had a point; and anyway, it was just a movie, what was everyone getting so upset about?   As the memory of the Second World War and Chaplin’s moral scandals faded, and anti-Communist panic subsided, newer audiences have rediscovered the film; it’s not enjoyed the same popularity as Chaplin’s silent films, but it’s gained fans in more recent years.

Which is why I’ve been thinking a lot about my own reaction, and how it has taken none of that into account. Like audiences of 1947, I was also used to Chaplin’s “Little Tramp” – but unlike them, I’m coming to this film in the aftermath of the Cold War, and well after any of Chaplin’s moral scandals have been discussed (and at a time when there have been moral scandals which make Chaplin’s May-December marriage and one lone paternity suit sound almost quaint).  The things he says about war crimes got just a shrug from me.  And as for economics?  Shoot, I’ve met actual anarchists who probably think Chaplin didn’t criticize capitalism enough.  At most it felt like Chaplin was getting a little heavy-handed. 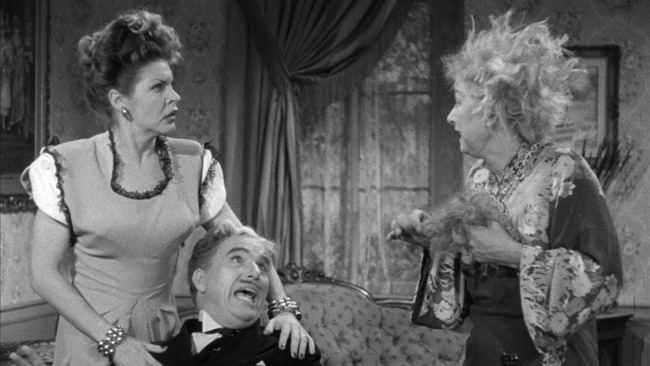 And ultimately that feeds into my own reaction – which is that this felt like an “I am not Spock” sort of move for Chaplin, and that his efforts to re-invent himself were falling a little short.  It’s not uncommon for a comic actor to try to go serious; sometimes it works very, very well (go watch Robin Williams in Awakenings or Good Will Hunting), and sometimes…it doesn’t (there is an infamous Jerry Lewis movie I shall not name).  For me, this fell somewhere in the middle.  Chaplin is trying to play against type, but he’s included so many comedic moments, and his comic instincts are so good, that a lot of the business just reinforces Chaplin-as-comic for me.   There’s an extended bit in the middle when he’s trying to do in one of his conquests, but all his plans fall flat, with slapstick business that feels straight out of his silent films.  At one point, he even gives someone the exact same kind of fake-innocent gurning simper that he used in the boxing scene in City Lights. 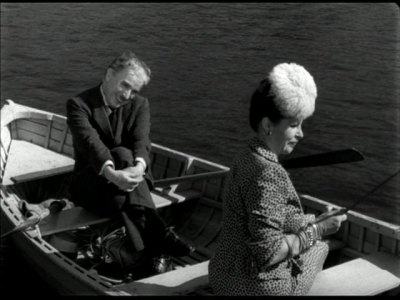 I suspect, though, that if I hadn’t seen Chaplin’s films so recently, that might not have stuck in my head.  But I was only introduced to Modern Times and City Lights a few months ago, and this has all been my introduction to Chaplin as a whole. His serious turns sounded a little bit pretentious, but he was clearly shining at the comedic bits, and I found myself feeling like he was trying too hard to Be A Serious Actor but kept getting instinctively dragged back into comedy.

Chaplin can change, but maybe he tried to change too much; and the times changed on him too.