There are times when I really feel my inexperience with film study, particularly when my own opinion differs so strongly with others’.  Whenever that happens, I swallow hard and remind myself that opinions are still valid, and try to examine where my own opinion might be coming from.  Most of the time it’s from something in my own unique background, something that I’ve brought to the table unexpectedly; that happens for everyone, after all, and maybe other people are having the same reaction as I am but they’re just holding their tongues because a different opinion is more popular and they feel stupid, like I did.  And that’s why I try to speak up about “I disagree with the prevailing opinion here”, but also add “but that may just be me”.

To wit, Notorious. A lot of the critical reviews I’ve read rave about this film and call it one of Alfred Hitchcock’s masterpieces.  However, I spent most of the film watching with a furrowed brow and thinking “my gosh, Cary Grant and Ingrid Bergman really don’t have all that much chemistry.” 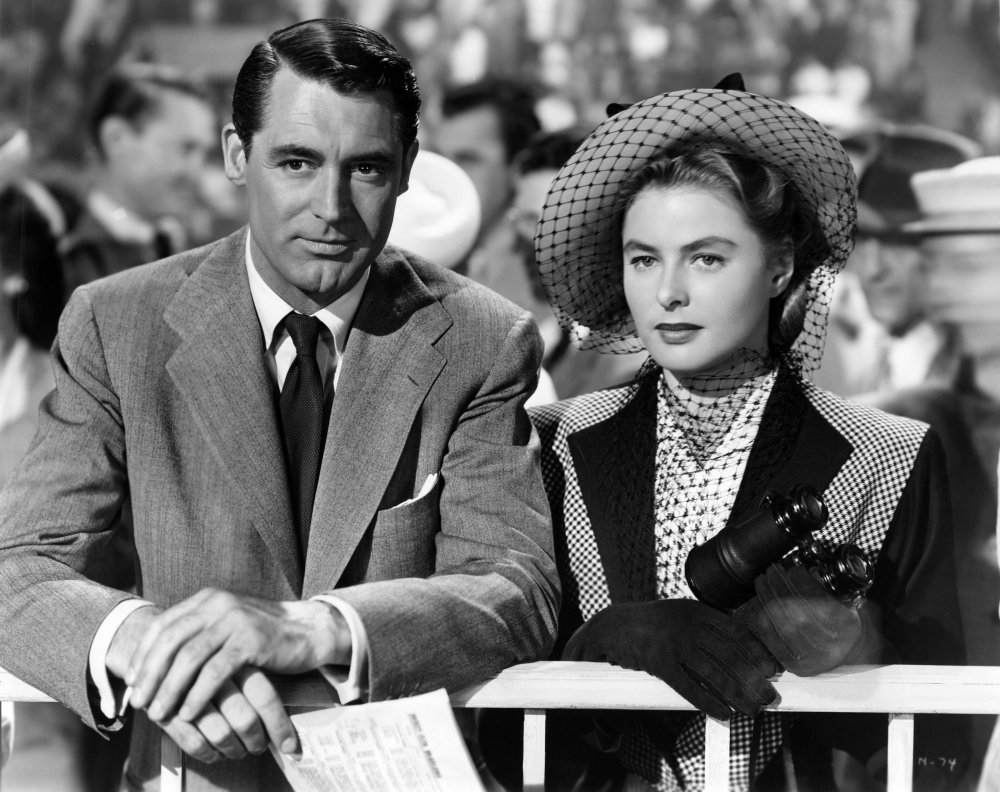 In truth, they do have some. Ingrid Bergman is Alicia Huberman, the daughter of a German expat who’s throw in jail right at the top of the film; he’s guilty of spying for the Third Reich. Alicia holes up in her house with friends right after, thinking everyone suspects her now; but the CIA turned up proof of her pro-USA sympathies during their investigation and has a different idea, sending their agent Devlin (Cary Grant) to recruit her for a mission.  It’s not the most auspicious of meetings – Alicia has been drowning her sorrows heavily when they meet, and has already something of a party-girl reputation – but soon agrees, flying with Devlin to Rio de Jainiero to await further instructions. And somehow, en route to Rio, sparks fly for the couple.

Which makes it preeeetty awkward when Devlin finally learns that Alicia’s mission is to  hook back up with one of her old boyfriends, Sebastian (Claude Rains), who’s part of a suspected Nazi spy ring in Rio.

Neither Alicia nor Devlin are all that thrilled, but cope with that by taking it out on each other as Alicia goes ahead with the mission, eventually marrying Sebastian and moving into his mansion where he lives with his mother and occasionally throws lavish parties.  Devlin occasionally drops by, and Sebastian is suspicious – but more from jealousy.  Alicia continues to play dutiful wife and occasionally report to Devlin.  And one day she reports that one of Sebastian’s guests reacted with great distress when he saw a specific wine bottle out on the sideboard; and come to think of it, the wine cellar was a place that Sebastian kept locked and he had the only key.  Something fishy was afoot, what if they gave a party and she tried to get that key so Devlin could check it out?…

Now, the espionage part of the plot, I dug.  Alicia’s efforts to get the key, check the cellar out, and get her and Devlin to safety before getting caught make up a very tense several scenes.  The pair have to do a lot of quick thinking and have a lot of close calls, and here’s where you’ll also find a lot of Hitchcock’s best camera work (my favorite – a shot that starts at the top of a grand staircase, looking at all the people milling around at the party, and then the camera very slowly starts to zoom in, first picking Alicia out as she talks to some guests; then zooming in tighter and tighter to the hand she has behind her back, until we see the fateful key juuuust sticking out between two fingers). But something about the Grant/Bergman matchup just didn’t sit right with me.  While I was watching, I chalked it up to chemistry; but in retrospect, I think it was just seeing Cary Grant in a serious role that bothered me.  He’s so good in the screwball comedies that that’s the Cary Grant that imprinted on me, and his serious roles leave me cold (you’ll recall I really didn’t like him in Only Angels Have Wings).  Plus he’s got a lot of scenes where Devlin is coping with his jealousy by basically slut-shaming Alicia, which didn’t sit all too great with me either.   I may be better able to overlook those elements in a future rewatch, but this time I simply couldn’t.

This actually may be something to consider when I get done with the list finally – giving some movies a second chance when I suspect that “it wasn’t the film, it was me.”