So there’s some backstory you should know about me first.  Lots of teens growing up in small towns complain that “nothing ever happens around here,” and I was no exception. But in my Connecticut hometown’s case, there is arguably statistical proof of that; a 2005 search for “the most average person in America” finally awarded the title to the maintenance supervisor at my hometown tech school,  and other studies have established that my corner of Connecticut is the one spot in the country which is least likely to suffer from any kind of natural disasters.  Connecticut, as I experienced it, was a place where nothing ever happened.

So I found some parts of this story about a Nazi war criminal escaping to lie low in small town Connecticut to be absolutely hilarious.

Not that the whole thing was a laugh-riot by any means.  It all starts out quite dramatically – Edward G. Robinson is “Mr. Wilson”, a member of the U.N. War Crimes commission, and is arguing to his companions that their best chance at catching one of their most-wanted fugitives, Franz Kindler, is to let one of Kindler’s henchmen escape and then tail him. Soon their former prisoner Konrad Meinike (Konstantin Shayne) is on the run, Wilson hot on his tail and following him to the sleepy town of Harper, a twee little village where a stately clapboard steeple looms over the town green and the general store manager (Billy House) likes to play checkers for stakes.  Wilson manages to lose track of Meinike long enough for Meinike to locate Kindler (Orson Welles), now living as “Charles Rankin”, a professor at the local prep school and fiancé to preppy Mary Longstreet (Loretta Young). 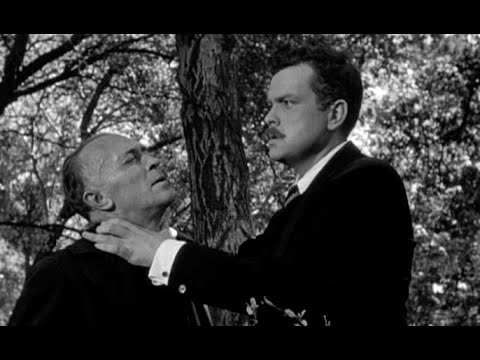 Meinike and Kindler slip off to catch up in the woods near town – but to Kindler’s surprise, instead of swearing his loyalty, Meinike announces that he’s had a religious awakening and begs Kindler to repent of their war crimes, like he’s done. Instead, a panicked Kindler – afraid Meinike may confess and give him away – strangles him in the woods and hastily buries the body before slipping back into town in time for his wedding.

Wilson stays another couple days asking around for Meinike, hoping to find out who Meinike eventually contacted. He comes up empty-handed, but something about “Charles Rankin” doesn’t sit right with Wilson, and he decides to stick around a little longer and keep an eye on him…

I was surprised to read that the hardcore Orson Welles fans dismiss this as one of his lesser works, because it really was quite good; a nice little clockwork of a plot, with Wilson and Kindler in a cat-and-mouse pursuit with the unfortunate Mary caught in the middle, and some eerily effective Wellesian touches in the filming – looming shadows, eye-catching camera angles, and the like.   The “town green” set was actually a clever touch; Welles built it out of five interlocking sets so he could use the entire space, setting up shots so you could see Kindler talking to someone in the general store while over his shoulder, through the window of the store, you could see Wilson sneaking across the green and sneaking inside the church.  It let Welles cut corners with production, shooting on a soundstage instead of going somewhere to film on location (he’d been challenged to bring the film in under budget), and it had the added effect of looking very strikingly like the town green where I grew up.

Welles also insisted on including a scene where Wilson shows Mary some newsreels showing the liberation of a Nazi concentration camp.  In the film, it’s Wilson’s attempt to shock Mary out of denial about her sweetie’s true identity; but in reality, Welles was trying to do that to the rest of the world. He’d seen the footage a few months before, while he was visiting a conference held by the very early United Nations, and was so floored that he wanted to issue a wake-up call to what was still a disbelieving world about the depth of Nazi atrocities.  To 21st century eyes the clips Welles uses are quite restrained; we’ve seen far worse since, both from the Nazi camps or from any of the atrocities that have happened since (Cambodia, Rwanda, Myanmar…).  But for many film-goers in Welles’ time, it was probably the first footage they’d ever seen of the camps’ aftermath; some of the very clips Welles used later went on to be presented as evidence in the Nuremberg Trials.

There are a couple of small nits I could pick about this; Welles is only kind of “meh” as an actor in this, I’m afraid, and there’s a character whose death is cornily symbolic (you’ll know when you see it).  But on the whole I was quite taken by this.  And the fact that it’s set in Connecticut will forever tickle me in a place I can’t reach.