Ostensibly, this film was an adaptation of an Ernest Hemingway short story.  And the first twelve minutes are indeed a faithful recreation of the story, in which a pair of hit men bully the staff at a small town diner into letting them wait for their next hit, a local lummox everyone knows as “The Swede” (Burt Lancaster).  But when another patron escapes and slips off to warn The Swede, he says he’ll just stay put, waiting for the hit men to turn up – as surely they will – because he’s done bad things.  Hemingway’s story ends there, leaving the screenwriters to think up a reason why The Swede seemed so resigned to his fate.

And you can kind of tell; the rest of the movie is a very different tone.  Not that it’s bad, though – it’s just different.  It follows a life insurance investigator, Jim Reardon (Edmond O’Brien), as he unravels The Swede’s mystery, re-tracing his story from his days as a boxer to his induction into organized crime, where The Swede falls for his boss’s girl Kitty (Ava Gardner) and gets suckered into the actions that bring about his downfall. 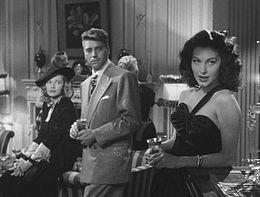 It’s actually a pretty clever mystery, with a couple different levels of double- and triple-crossing going on.  And all the performances are perfectly fine; Ava Gardener is the femme fatale here, but her fatale is so subtle that we’re suckered in along with The Swede.  Speaking of which, this was Burt Lancaster’s breakout role; he could have payed The Swede as a complete meathead or played him as completely besotted with Kitty, but wisely goes much subtler with it, getting out of the way and letting the story unspool.  O’Brien’s Reardon also goes subtle; it is still head-scratchingly odd that he’s been written as an insurance agent instead of the detective he clearly ought to be, but no one really remarks on it, and Reardon doesn’t make any dumb moves, and the rest of the story is unfolding in an interesting way so we quickly just go with it.

See, there, it’s all fine.  But that first scene – the one directly based on Hemingway – is a masterwork of building tension and slow menace that the rest of the film never quite reaches again.  The story isn’t long enough to sustain a full run-time of action, but it’s definitely got enough suspense enough.