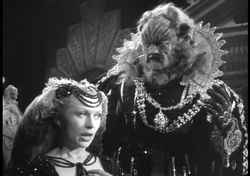 This is yet another film I’m probably going to be thinking about a lot.

Plotwise, this 1946 film is a pretty straightforward adaptation of the French fairy tale – a cursed prince catches a traveler picking a rose from his garden, and condemns him to death unless he can send one of his three grown daughters to take his place, youngest daughter agrees, they gradually fall in love, etc.  The only thing this film adds is a family friend who’s another admirer for Belle and a fairly jerkish older brother with a gambling habit.  The friend is a more decent sort of fellow than the “Gaston” character from the Disney film – but the older brother is worse than Gaston, and I wouldn’t be surprised in the least if Disney smushed the two together to create Gaston in the first place.

But while the plot may be straightforward, the visuals are anything but. French surrealist Jean Cocteau was behind this film, and his vision included strikingly dreamlike details; especially in The Beast’s mansion, where glowing pavilions beckon, doors open and shut by themselves, statues breathe smoke, and the hallways are lit by living human arms holding candelabras.

During the opening credits, Cocteau makes an appeal to the audience, pointing out that children tend to accept such fantastical elements and asking adult viewers for some of the same faith.  But these living statues and candelabras aren’t cozy and friendly like with Disney’s Lumiere; here they’re meant to be strange.  Not that they speak, or menace, or threaten; they just…are.

Comparing Disney’s version with Cocteau’s is almost unavoidable, as the look of Disney’s Beast clearly owes a lot to the look of Cocteau’s as well – but not the temperament. Disney’s Beast is presented as a cruel man in a beastlike body that’s eventually won over with The Power Of Love, while with Cocteau’s Beast has a definite “animal” quality.  One scene that stuck with me in particular sees Belle exploring the grounds of the Beast’s castle, eventually coming to a door in a wall; behind the door she hears a strange watery sound.  She opens the door to find a small pond – and far at the other side of the pond, The Beast is lying on his stomach on the ground, lapping up water like a cat.

But Belle takes the Beat’s behavior in stride; after watching a moment, she simply closes the door silently, leaving The Beast in peace.  And soon we also start to roll with whatever Cocteau and The Beast throw at us; magic mirror that lets you spy on other people? Sure. Magic horse that will take you places if you just whisper in its ear?  Yep.  Magic glove that will teleport you through walls?  Sure, why not.  We’re drawn into a childlike acceptance of fantasy, but the fantastical detail is surreal. In fact, the one place where the film has to hew with fairy tale convention – when the curse on The Beast is lifted, and he’s transformed into a handsome prince – feels strangely disappointing.  Even Belle seems unimpressed; instead of swooning over his transformation, she keeps him at arms’ length at first, asking herself “who’s this dude?” 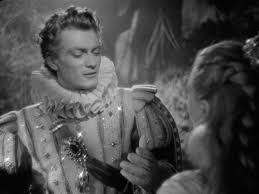 In a weird way, I think that Cocteau actually might have done a better job of capturing what listening to a fairy tale as a child actually feels like.  Dancing plates and singing candelabras are equally as strange as smoking statues, but it feels like the Disney elements are front-loading a reassurance that they’re nice, they’re friendly, they won’t hurt you.  Or they’re blatantly mean.  Spotting that kind of performative niceness or meanness is something that comes easily to adults – not so with kids, who just encounter the strange stuff as strange stuff, and process it at their own pace.  And sometimes they end up deciding something wholly different from what the storyteller intends (upon his first viewing of any of the Star Wars films, my nephew was convinced that Darth Vader was the hero, and absolutely could not be talked out of this belief).  For children, the strange stuff just is what it is, and your job is to figure out how it fits together.  And until you make up your mind all you can do is roll with it.