(Before I begin – my sincere apologies for the delay.  It was something of a challenging week.)

There are some bits of Paisan I’ve still caught myself pondering well afterward, which I think is a good sign.

Set during the waning days of the Second World War, Paisan actually tells six stories – each set in a different part of Italy as the Allied soldiers fight their way from Sicily up to the Po River valley in their quest to liberate Italy from Axis control. But only half of the stories are about combat; the rest have a smaller focus, mostly dealing with the aftermath of battle and the culture clash between civilians and soldiers.  Each of the six segments had its own screenwriter, so the tones and topics vary (and I’m afraid so does the quality, a bit).

Some of the stories are seriously affecting. One deals with a Neopolitan orphan who runs into a blitheringly drunk American G..I. in the street, follows him around until he falls asleep, and then steals his shoes. The G.I. tries to track him down when he sobers up, but eventually gives up when he sees the living conditions at the camp where the orphans live. 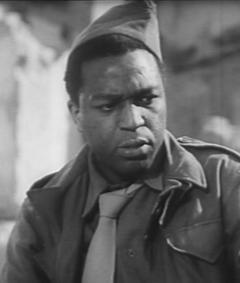 But it’s the drunken rambling the G.I. was making that grabbed me.  He is African-American, and before he passes out, he rants bitterly to the unaware orphan about how he’ll initially be hailed as a hero when he returns to the States, but then knocked right back down into place – because he’s a war hero second, a black man first.  This is the second time a post-war film showed a sensitivity to the plight of World War II’s veterans, and how some were returning home to a hard struggle.

Another segment starts out sounding like the setup for a sitcom – a small monastery in the country welcomes three U.S. army chaplains to stay with them for a few days, in gratitude for their liberation.  But it isn’t until the chaplains are settling into their rooms that the brothers discover – to their horror – that not all of the chaplains are Catholic, as they’d assumed.  One is Catholic, but another is Lutheran.  And the third is a rabbi!…the good brothers are thrown into great consternation, torn between aversion to the foreigners – and gratitude towards their service. 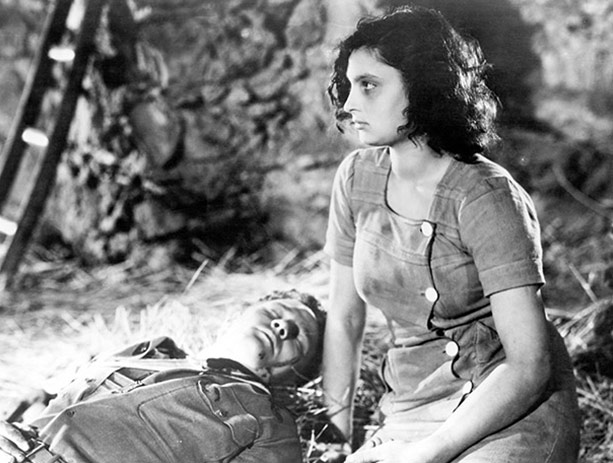 Director Roberto Rosselini used several unknowns here, like he did with Rome Open City earlier.  Most notably was with his casting of the Sicilian woman Carmela Sazio in the first segment, a Sicilian-set piece in which a local woman offers herself as guide to a squad of Allied soldiers trying to slip behind enemy lines.  Not only was Sazio not an actress – she wasn’t even literate, and Rosselini had to ditch the script and turn all her scenes into improv.  Most of Sazio’s performance came during a scene with a G.I. from New Jersey – he speaks no Italian, and she no English – and somehow over the course of a five-minute sequence, they manage to get past that particular hurdle and begin warming up to each other.  Not that much, mind you – he’s been left to babysit her while the rest of the squad goes out to fight, and she’s understandably mistrustful and not sure what’s going on – but there’s still the very beginnings of a connection.  It’s a surprisingly engrossing scene, and one that most critics praised at length, all the more impressed by Sazio’s apparently natural talent.

All the performances were fine, actually.  I just wish the stories were a little more consistent – the segment set in Florence, with a British nurse trying to sneak through a battle zone to locate a friend, actually managed to be boring, and the final segment had something to do with Allied soldiers teaming up with Italian resistance fighters in the marshes around the Po, and I got too bogged down in the complexities of who was a partisan and who was an Allied soldier and what they were doing and I ultimately got lost.

For the sake of the other tales, though, I still recommend this.